Appalachian Trail, New York, April 2017 — Last week I was lucky enough to spend a few days hiking with my delightful friend Robin.  She is on a month-long trek to both close an unfinished gap she has between Georgia and Maine; and to get into shape for ridgerunning.

She parked her truck and stashed her extra gear at our house and then together we drove to New York where climbed up to the ridge that hosts the AT at the NJ/NY border on a very warm spring day.

I met Robin, aka Miss America, when I was ridgerunning in Georgia in 2015.  The daughter of National Park Service rangers in the Great Smoky Mountains National Park, she’s a willy woodsman and a strong hiker.  She was a ridgerunner in Maryland last year and will serve in Northern Virginia this season.  All told, she’s a perfect hiking partner.

Speaking of what’s hot, I can’t remember the last time I hiked in temperatures under 80 degrees F.  Last September in Vermont, this March in Georgia and last week in New York it was hotter than Hades.  My socks have been so sweat-soaked that they make a squishy sound that squeaks like Crocks on a wet tile floor.  Talk about holding your feet to the fire.  Enough with the hot weather already!

Fortunately the water sources were plentiful and flowing.  In spite of that, I drank four liters of water and still didn’t urinate.  By the end of my journey, my clothes were so salt encrusted that they could stand by themselves unaided – you know, kind of crunchy like saltine crackers.

New York is the state where the AT angles a hard north eastern turn toward Maine.  The trail turns perpendicular to the north-south flowing ridge lines meaning it’s all day up and down for the hikers.  In other words, PUDS – pointless ups and downs. 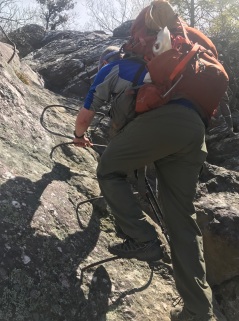 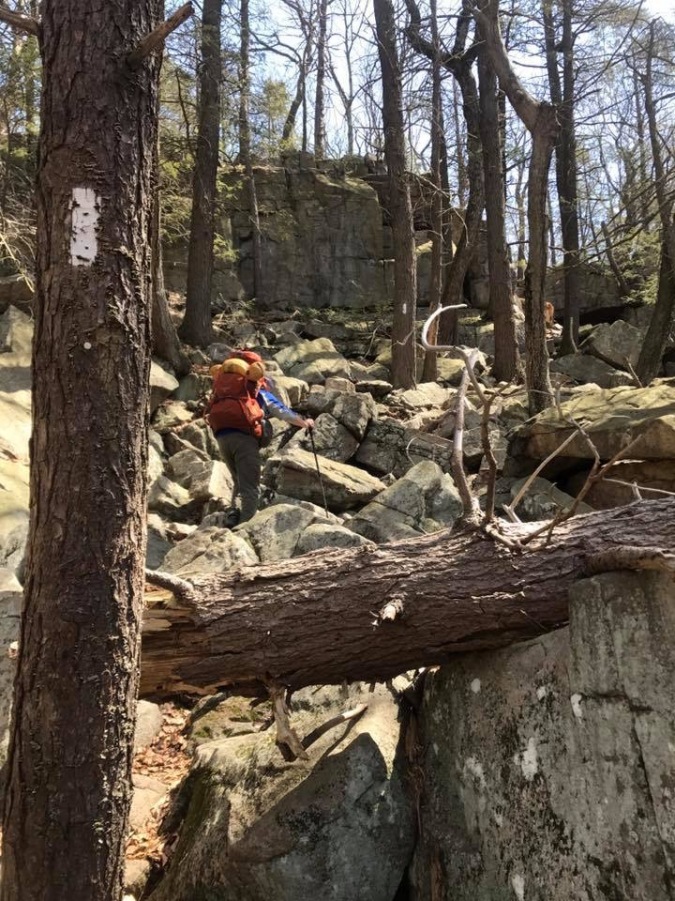 The terrain is ugly for the most part.  This is hard work even when heat is turned down. 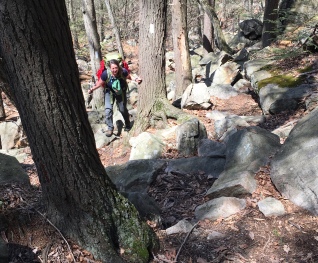 The gnats had recently hatched.  In NY they’re a feature, not a bug. 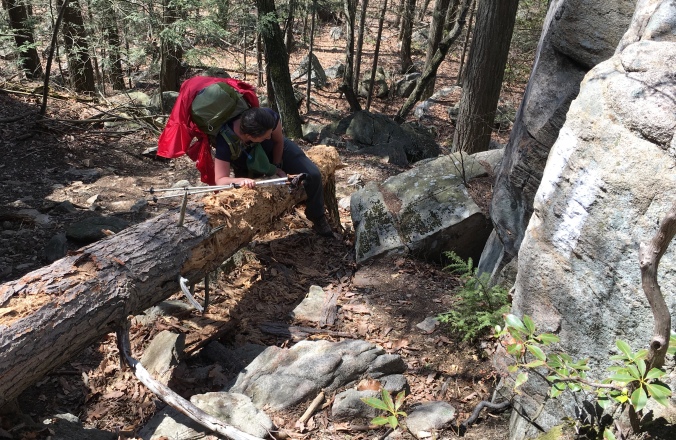 Can you spell rugged?

How ’bout them bears?  We properly hung our food every night. 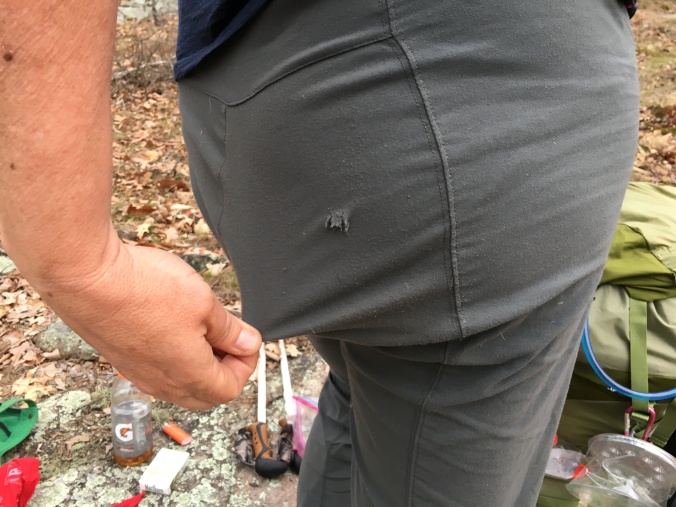 We were out four days before it was my time to head home for chainsaw recertification, a trip to Annapolis Rocks to bring supplies up to Gene Anderson and the Appalachian Trail Conservancy Flip Flop Festival this weekend where I’m a featured speaker. 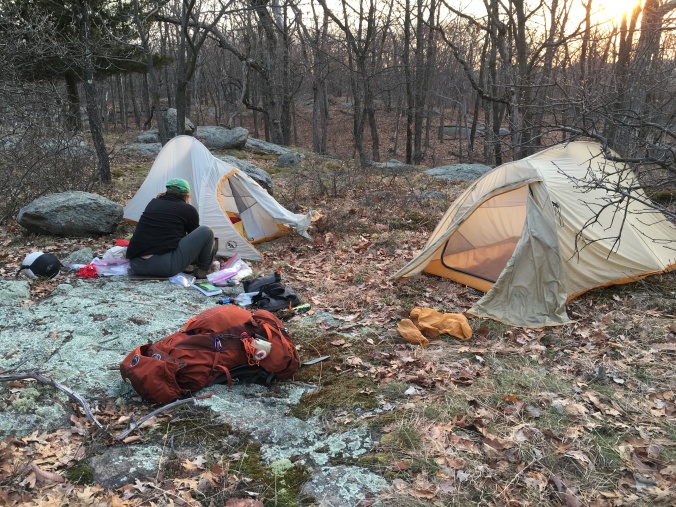 We tented rather than sleep in shelters.  This is at dawn, packing up before a big rain pending.  At first, Robin was worried about wearing a Red Sox cap in Yankee country, but people treated her as a novelty.  Not sure most of them had never seen a Sox fan before. 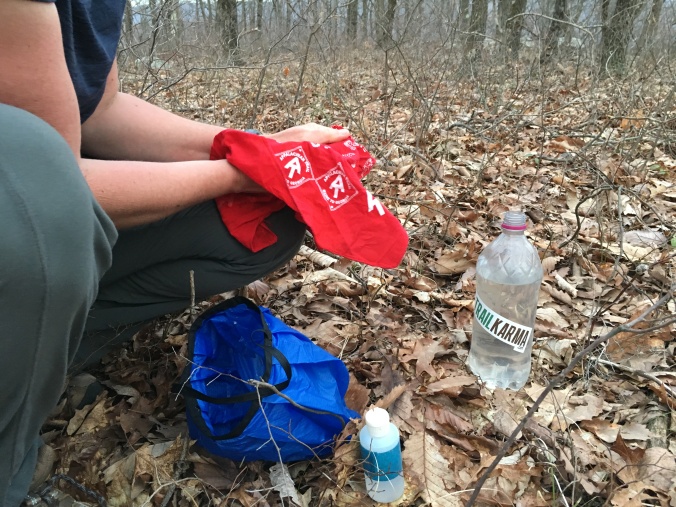 Staying clean in the woods is critical to remaining healthy and avoid gastrointestinal ailments.  We were hiking along one afternoon when I got a message from the ATC asking me if I could take a photo of a hiker using soap and water to clean up in the field practicing leave No Trace principles.  We magically produced the goods. 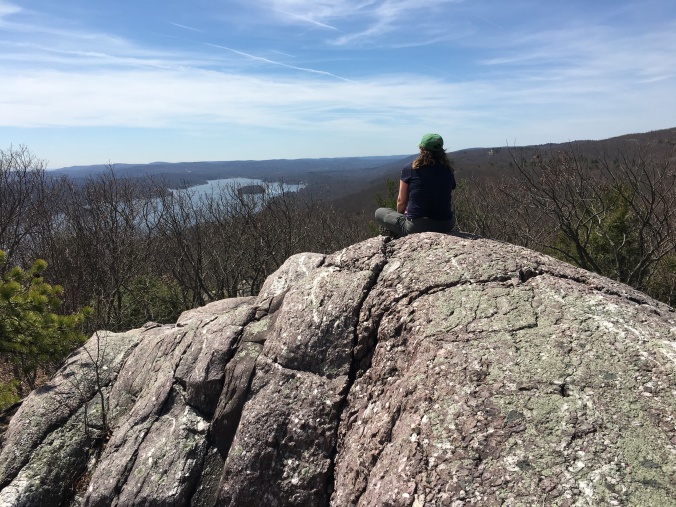 Yes, the trail goes straight up that rock slab.

Sometimes you get surprised by trail magic.  This was just north of the aptly named “agony ridge.”  The sodas were cold too!  As a practice, leaving unattended food, trash and drink along the trail is not a good idea.  Too many opportunities to unintentionally feed animals and make a mess.  Some call this “trail tragic.”  We did appreciate it though.

Old sign.  Can’t wait to rejoin Robin next week.  We’ll be hiking north until just before ridgerunner training starts in late May.  Then my spousal unit will come pick us up. There’s no doubt in my mind that Miss America will go far.

7 thoughts on “Short Part of a Long Journey”