Shenandoah National Park, Sunday March 11, 2018 — About ten days ago a nor’easter ripped through the mid-Atlantic on its way to hammer New England.  Large trees were snapped and uprooted like toothpicks, dragging down power lines as they crashed to earth.  Widespread power outrages bloomed in the winter storm’s aftermath.

Our own electricity in the big city burbs was out for four days thanks to a big old tree that landed in the wrong place.

Soon word spread of massive blowdowns all along the Appalachian Trail, especially in Shenandoah National Park.  What’s a dedicated trail maintainer gonna do except saddle up and ride toward the sound of cracking tree trunks?

This tree snapped near its base, and in the process, blocked a four-way trail junction.  Bucking this 20-inch tree was an interesting puzzle requiring careful attention to safety and a step-by-step approach. 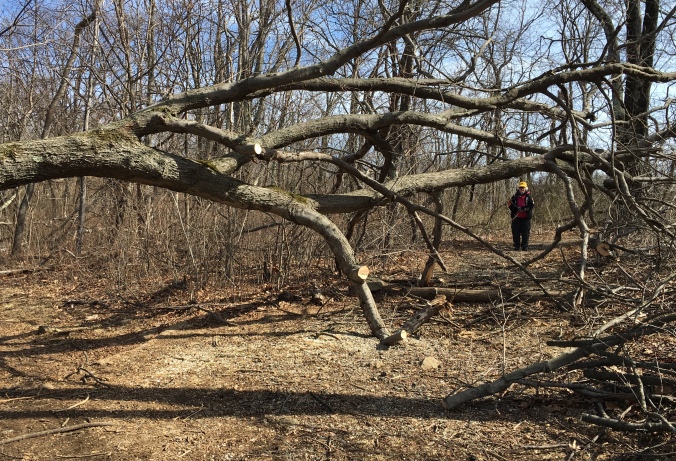 Step one was trimming away the smaller branches and reducing the blowdown to its bare structure.

Step two is getting the main trunk on the ground where it’s safer to chop it up.

Step three is reduce the main trunk.  Here, with a top bind, after an initial cut about eight inches deep, wedges are driven to keep the cerf from closing and trapping the saw in the cut. 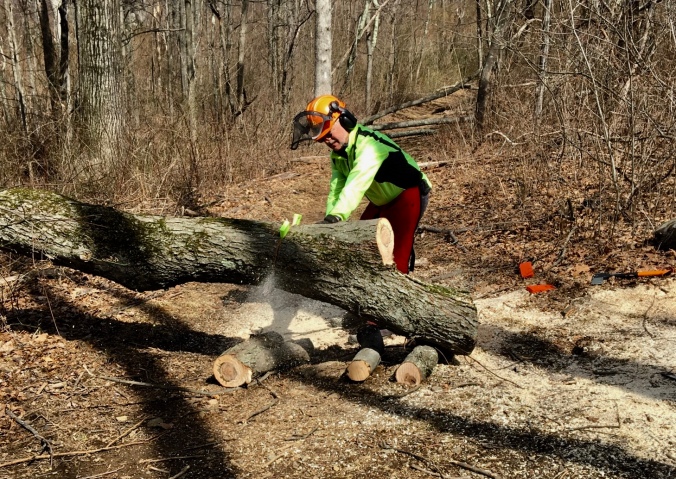 Wedges in, the job can be finished.

Step four is get the slash off the trail and out of the way.  Best of all, we converted a lot of chainsaw gas into sawdust. 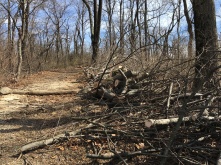 All told, we cut six blowdowns on the section I maintain.  The subject tree was on the southern end.

After that, we moved to the Indian Run fire road which is the access to the Hoodlum’s maintenance hut.

We quickly picked off three minor blockages on the fire road.

Of course there’s always “that one.”  This 12-incher was draped in vines and it was hollow making it a bit more sketchy to cut. 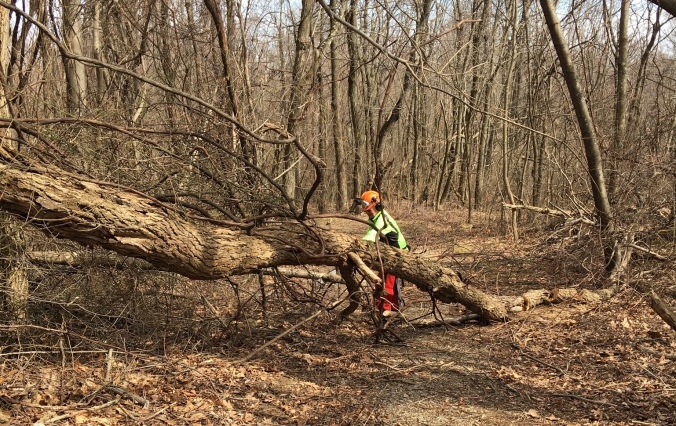 The approach was to trim away the vines and branches before dicing up the trunk from the top down.

Sliced into small enough chunks to drag off the trail.

Ten obstructive trees were gone.  Then we found this.  This tree is a good 20 inches alone.  It has a twin right behind it. That’s a twofer.  It’s also a “leaner.”  The angle isn’t bad, but this multi-ton tree’s top is hung up requiring care to safely bring it to justice.

The day was getting late.  Fatigue proved the better part of valor and a safety rule red light, so we left the remaining trees for the Hoodlums to tackle on Saturday.