Shenandoah National Park, August 9 – 18, 2018 — Ridgerunning on the Appalachian Trail can be demanding, and like athletes, Ridgerunners are sometimes injured.  When injury happens who’s in the bullpen?

Mary found a red tail hawk feather.  As a member of the Cherokee Tribe it’s not cultural appropriation.

Like Ghost Busters, who ya gonna call?  Guess what?  My 2015 ridgerunner colleague in Georgia just happened to be the caretaker of the Potomac Appalachian Trail Club’s Blackburn Trail Center.  What?  A trained, experienced and ready ridgerunner already on the payroll?  No paperwork? Can someone say trading places?  Boom!  Jobs switched.

As a means of on the job training (OJT) I try to hike with each of our ridgerunners to help them learn the various rules and protocol of their patrol areas. 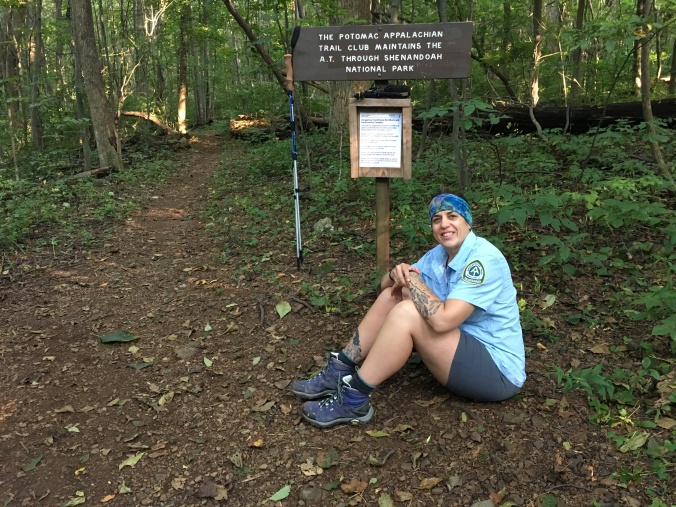 PATC Ridgerunners patrol five on and two off.  Mary started on a short week, so after her park orientation and equipment issue, which includes a radio and bear spray, we headed 45 miles southward from Shenandoah’s north boundary to Rock Spring Hut.

The weather was relatively mild early in the week only to turn ugly at the end of the first week and on into the second.

The first night was at the Indian Run Maintenance Hut, home of the Hoodlums trail crew.  There’s plenty of room for tenting.

Indian Run is the one place we build a fire.  It’s not open to the public and there’s plenty of precut and spit firewood under lock and key thanks to the overseers and members of the Hoodlums.  Note the poker.

The synonym for ridgerunner is janitor. Hikers can be ignorant and thoughtless at times.  Other times they are pigs to put it mildly.  The look on Mary’s face says it all.

Ridgerunners are paid seasonal trail ambassadors.  Their duties include Leave No Trace education, assistance to hikers to include first aid and trail information, minor trail maintenance, removal of litter and abandoned property, privy maintenance and quite frankly burying human waste at times.  They are also eyes and ears for land managers, park authorities and for trail maintainers.  For most, it’s a dream job most of the time, except when it isn’t.

The most common question asked by a ridgerunner?  “What were they thinking?  Answer:  “They weren’t.”

Don’t burn anything in the fire pit.  Most things don’t completely burn.  More importantly, camera studies show that the first place bears go when they enter camp is the fire pit looking for incompletely incinerated food.

Potato chip bag behind the shelter. What the … Common man! 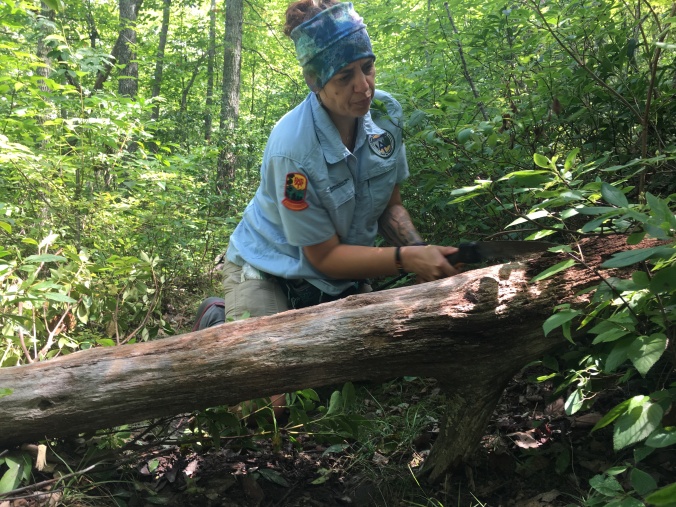 Clearing a minor blowdown with a 12-inch folding saw. The damn thing was made of iron. We took turns, wailing away for 20 minutes before we eventually won the contest. 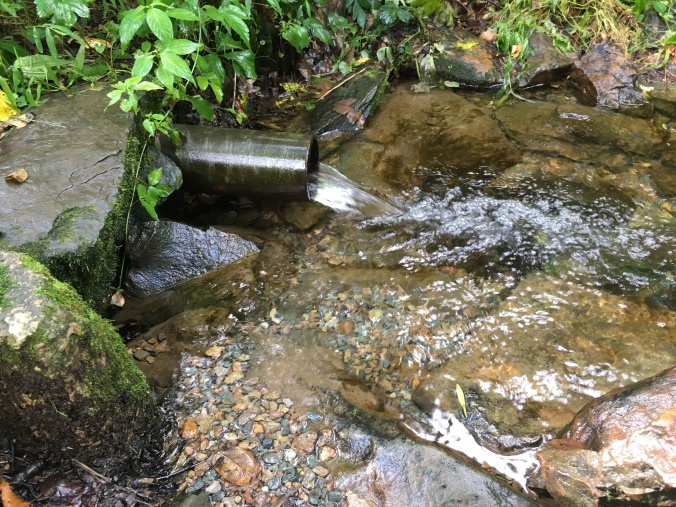 Water sources are checked for obvious contamination.  The flow rate is reportable.  With monsoon rains this summer, flow and dry springs are not a problem.

Painted rocks are a new phenomenon.  Leave No Trace outdoor ethics principles are clear.  Leave nature as you found it.  We remove the rocks. 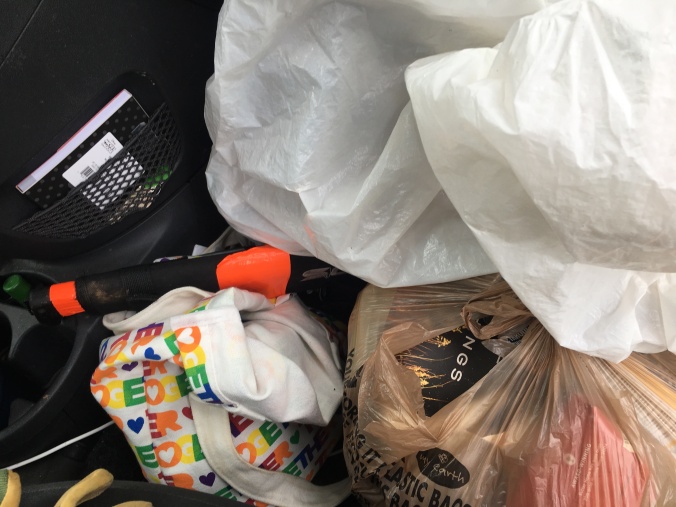 At the beginning of the second patrol, starting at the southern end of the park working northward, we discovered about two gallons, by volume, of abandoned gear including a large machete.  Much of this stuff was marked with international orange tape seen here on the machete handle.  In all, it reminded us of the type of trash we found ridgerunning in Georgia where hikers dump their usless junk, such as machetes, with reckless abandon.

Continuing the march, we found a similar cache 13 miles northward at the next shelter.  Same orange tape.  Fifteen pounds, four gallons of trash in total.

Flash forward two days to Saturday when I departed to join the Hoodlums for their normal work weekend.  As I pulled out of the Skyland resort after coffee and breakfast, here comes a hiker whose pack is uniquely marked with orange tape.  Connect the dots.

Unfortunately I didn’t have enough time to collar the perp.  Meanwhile the Hoodlums work trip was cancelled due to weather.  Since cell service is so poor in the park, I didn’t get the email until later.  When I did, I texted Mary and we headed back to Skyland in hopes we’d rendezvous with our culprit.

Eurika!  She whips hard right.  I go left to cover the loop.  Within five seconds, she spies orange.  Busted!  As I drive up from the back side, she’s shamed the culprit, aptly trail-named “Walmart,” into a pool of quaking Jello.

I unhorse and approach the quivering perp with the swagger and command presence of a backup cop.  Mary intones, “Here’s my boss.”

I open sardonically.  “We’ve been finding a lot of orange lately.  Can you imagine where that might be coming from?” At that moment this young man realizes that he is seriously outnumbered.  He caves and earns a 10 for his groveling. Turns out he’s doing a walking self-pack-shakedown thinking other hikers would want the cheap junk he’s dumped.

After some uplifting Leave No Trace education, Walmart tells us he’s planning to hike 40 more miles that day.  We laugh to ourselves and wish him well.  We’d embarrassed him enough.

Meanwhile Walmart has been informed that the ridgerunners for the next two hundred miles will be on the lookout to extend him a warm welcome, or not – depending on his behavior; and we planned to check the park shelters in his path in the event of a relapse.  (No photos for privacy reasons.)

Just in case you think ridgerunning is all work and no joy, think again.  Here we are scouting a “dispersed” campsite for, you guessed it, TP tulips.  What deer?  I didn’t see any deer…

Meals can be a joy.  Mary shared her avocado.  Thank you!  Glad my meal plan wasn’t spaghetti. 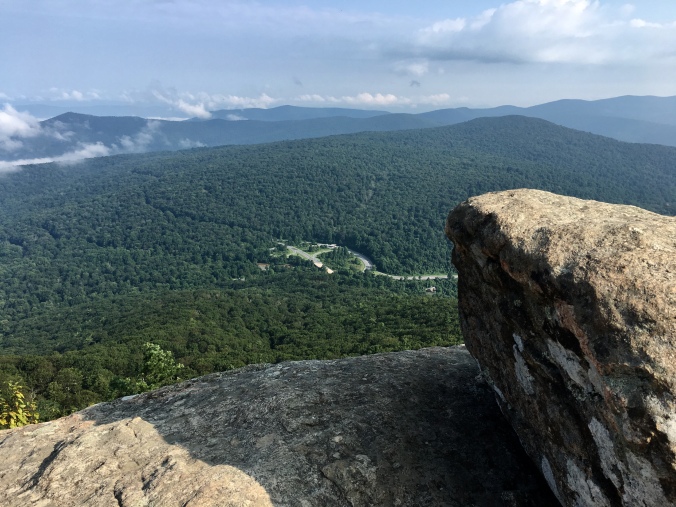 Then there’s the breathtaking view from the eponymous Mary’s Rock. The hike to the top isn’t easy, as you can imagine. 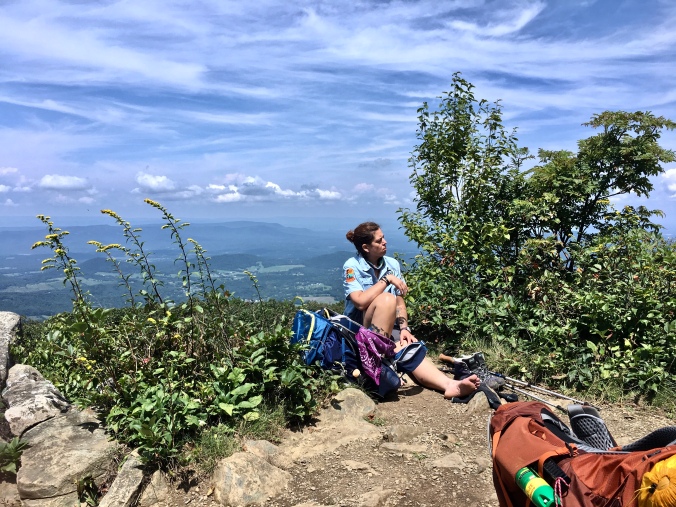 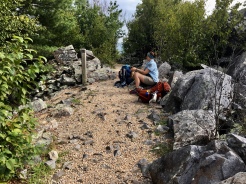 Black Rock.  My favorite place in Shenandoah. Believe it or not, it’s an ancient seabed that preexisted the Appalachian basalt. Now it’s a flowing talus slope that will eventually become soil over the millennia.

Not an IV.  Purifying water using a gravity filter two liters at a time. 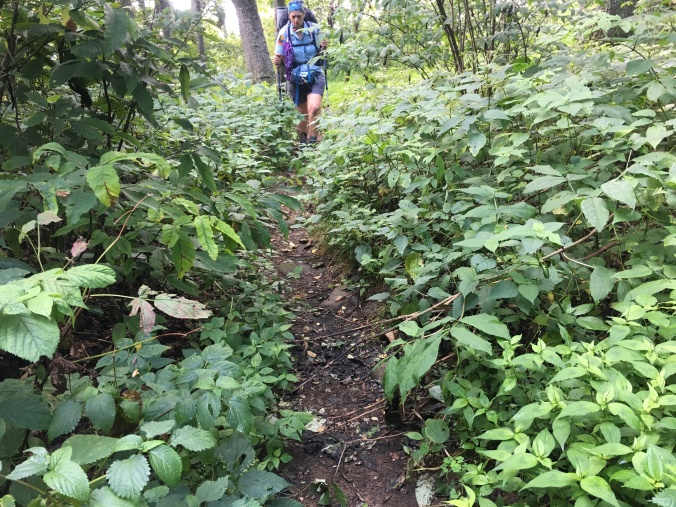 Sadly, weeds are tick vector and I wish my fellow maintainers were more diligent about weed whacking.

Regardless, every day on the AT in Shenandoah National Park is a good day.