South District, Shenandoah National Park, Appalachian Trail, November 30, 2018 — The east coast got smacked with an early season snow storm a little more than a week ago.  The Washington area escaped major impact, but it hammered the south district of Shenandoah between Stanardsville and Waynesboro, VA. and cities to our north.

Heavy snow and high winds crushed the softer trees leaving hundreds of them blocking  Skyline Dr., the road that runs 105 miles from one end of the park to the other.  The park trail crews report that the downed trees resembled a military abitis that runs for miles along the road.  Abitis definition at this link.

Leave it to the park crews to painstakingly clear the road quarter mile at a time.  Each tree must be bucked and chipped.  That’s a slow process.

Meanwhile, enough of Skyline, from Swift Run Gap south, had been cleared to permit the PATC to begin clearing the AT.  The supervisor of trails in coordination with the south district manager called for sawyers and swampers.

Sawyers are club members certified by the National Park Service to safely operate a chainsaw.  Swampers help the sawyers by removing slash and trunk rounds from the trail.  The plan was to attack the afflicted area from both ends.

As the supervisor of trails reported yesterday:  “We met at Swift Run Gap at 8:30am today and had 22 PATC members ready to work. Ten were certified chain saw operators including six District Managers.

We were limited as to parking shuttle cars because of the clearing of Skyline Drive and this constrained the amount of trail we could cover. The AT is clear from Swift Run Gap to Simmons Gap a distance of nine miles.

There is another group working from Rockfish Gap north and I don’t have any information on their progress right now. The main problem appears to be further south toward Rockfish Gap where the blow downs are quite severe.

Skyline Drive is not open for other than emergency travel and the clearing is very slow. The park maintenance crews and back country trail staff are responsible for that clearing. We will schedule another work trip later this week.”

Sawyers are distinguished by their red Kevlar chaps.

We divided into crews.  My crew consisted of three sawyers and three swampers.  We worked northward from Powell Gap to Smith-Roach Gap – about a mile and one-third. Other crews worked elsewhere.

The swampers were all experienced trail overseers and knew how to get after the work at hand.  They brought their pruning saws, loppers and other trail tools which allowed them cleared several blowdowns by themselves. 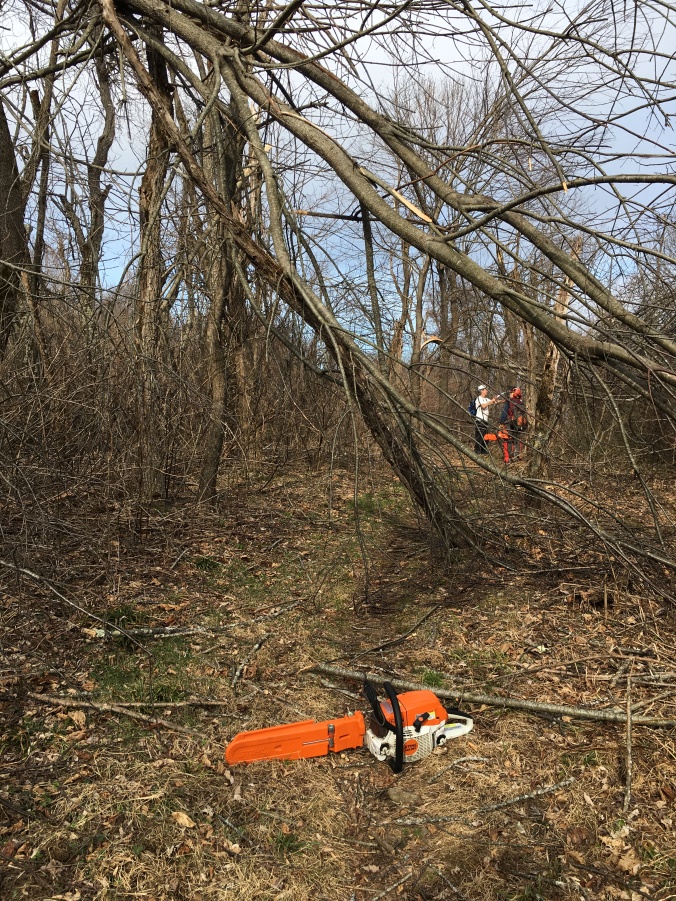 With one exception, our blowdowns were smaller trees snapped or bent over across the trail.  These are tedious to clear, our three two-person sawyer/swamper teams worked quickly and efficiently.

This is one blowdown we tackled with two sawyers, one on each side.  Hidden within these tangles are branches loaded with weight called spring poles.  They can whip around hard enough to cause serious injury when their energy is released.  Sawyers are trained to find them, but they are hard to read in tangles like this.  Each sawyer reported being surprised by more than one, including me.

All told, our crew removed 27 blowdowns in just over one mile. 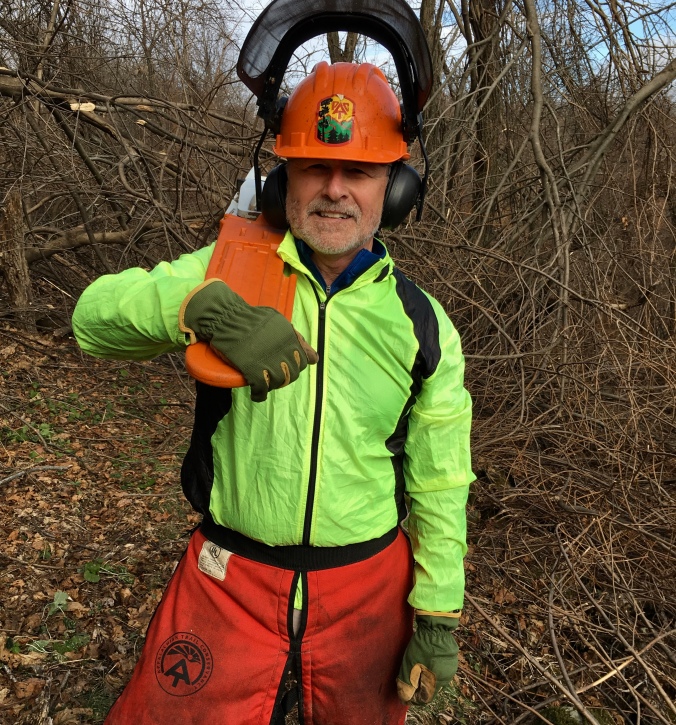 Stay tuned for follow on trips.  We’ll be at this for awhile.