My chainsaw weighs 11 lbs. including the hard plastic sheath on the bar.  If you carry one far enough on your shoulder, it can rub you raw.

Home, January 8, 2019 — Part of the federal government is shutdown over a political dispute.  I have strong views, but won’t share them here.  This blog is about protecting and preserving hiking trails and related matters.

My club, the Potomac Appalachian Trail Club (PATC), is responsible for maintaining most of the hiking trails in the Washington, D.C. region including 240 miles of the AT, 102 of which are in Shenandoah National Park.

The club’s activities in Shenandoah are sanctioned under a Memorandum of Understanding (MOU) for maintenance activities and for managing rental cabins.  We have a separate Cooperative Agreement to manage the ridgerunner program.  These are legal documents that spell out the rules of the road for us and for the park.

One benefit of volunteering in the park is that we are covered under the Volunteers in Parks (VIP) program.  There is a similar VIF program for national forests.  Essentially we have workman’s comp coverage when engaged in officially sanctioned activities.

With the government shutdown, our VIP coverage is suspended.  Accordingly, we aren’t allowed to volunteer.  The last thing I would want is to get kicked out of the park and probably out of the club for doing something I’ve been officially asked not to do. 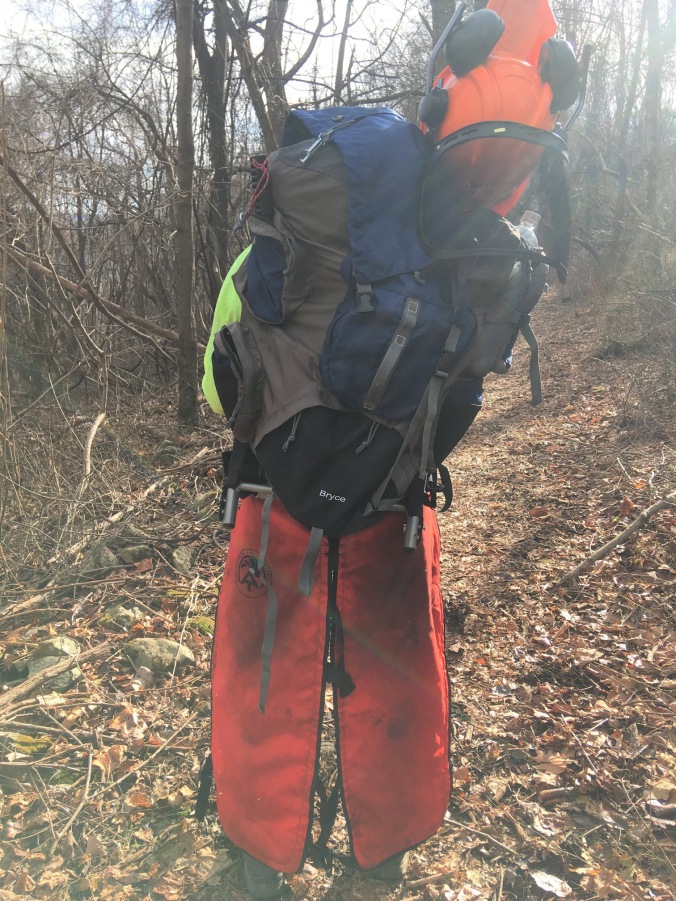 Hiking with my Kevlar safety chaps on backward.

Back to humping chainsaws.  When you have to hike in a long way, some of us stuff our saws in old frame packs for easier carrying.  The also make it easier to carry the safety gear, first aid kit, lunch, plus extra fuel and bar oil.

But, there are times when throwing the saw on your shoulder happens.

With little to do today, I decided to make a chainsaw pad out of leftover carpet pad from the recently installed carpet in the basement.

First I cut a hunk of spare pad to size. 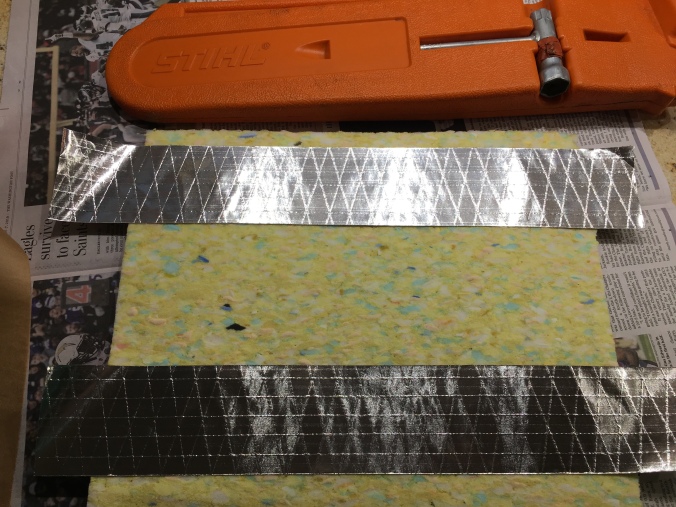 Preparing to tape it together.  The plastic vapor barrier side goes on the inside.

After taping the seam, duct tape makes the outer layer.