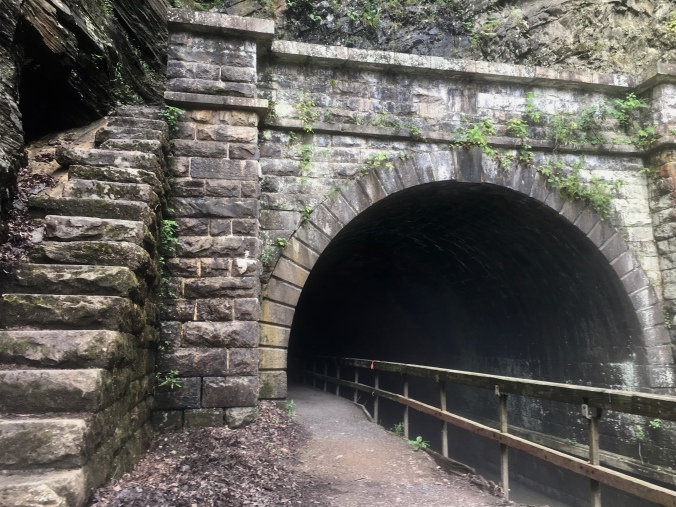 C&O Canal National Historic Park, July 7 – 10, 2019 — My Hoodlums trail crew colleague Cindy invited me to join her Allegheny Passage hike after her first partner was felled by a hip injury. We agreed to rendezvous at Paw Paw, WV – around mile 158 where the 3,118 ft. Paw Paw tunnel begins.  From there we’d trek to mile zero in Georgetown, D.C.  Link to Allegheny Passage Trail info. 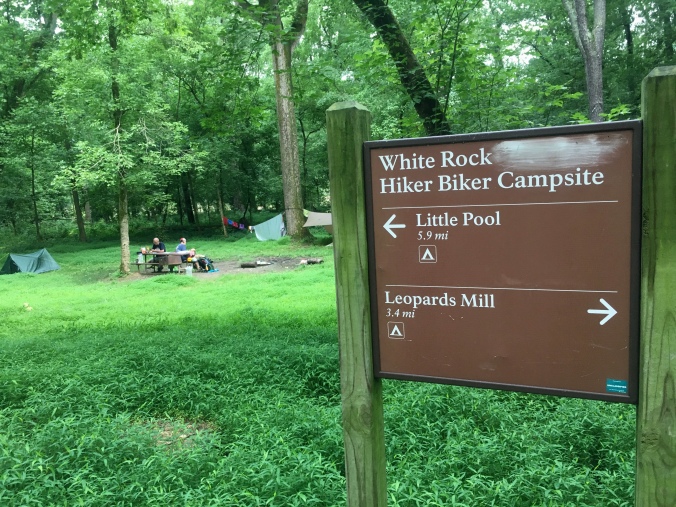 When Cindy asked me to join her for the last 160 miles, I thought, How hard could this be?  The tow path is flat! Just plant one foot in front of another for 10 days.  It would be a snap with campsites every 3 to 10 miles apart, each sporting a Porta Potty, a potable water pump and a picnic table. Pure luxury! 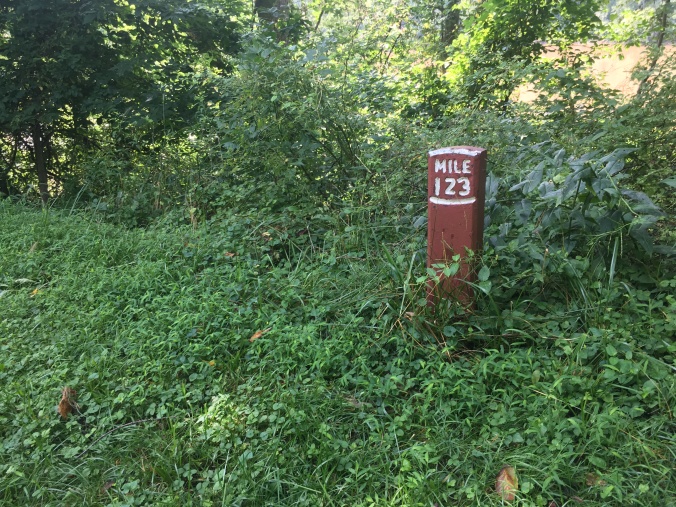 Best of all, like the Laurel Highlands Trail, every mile is marked!  Measuring progress by the mile is reassuring.  The distance simply melts away.  Easy peasy, right?  Stay tuned.

The tow path can be a bit muddy in places, but overwhelmingly consists of hard packed gravel.  Emphasis on the word hard.  It was like walking on unforgiving concrete.

The guide book is written for bikers, not hikers.  Hiker guide books have maps of trail towns showing where and the distances to needed business.  Whereas a mile is a lot for a hiker to walk to a grocery store, it’s nothing for someone on a bicycle.  The only clues we had were town name and yes or no for restaurants, grocery and the like. 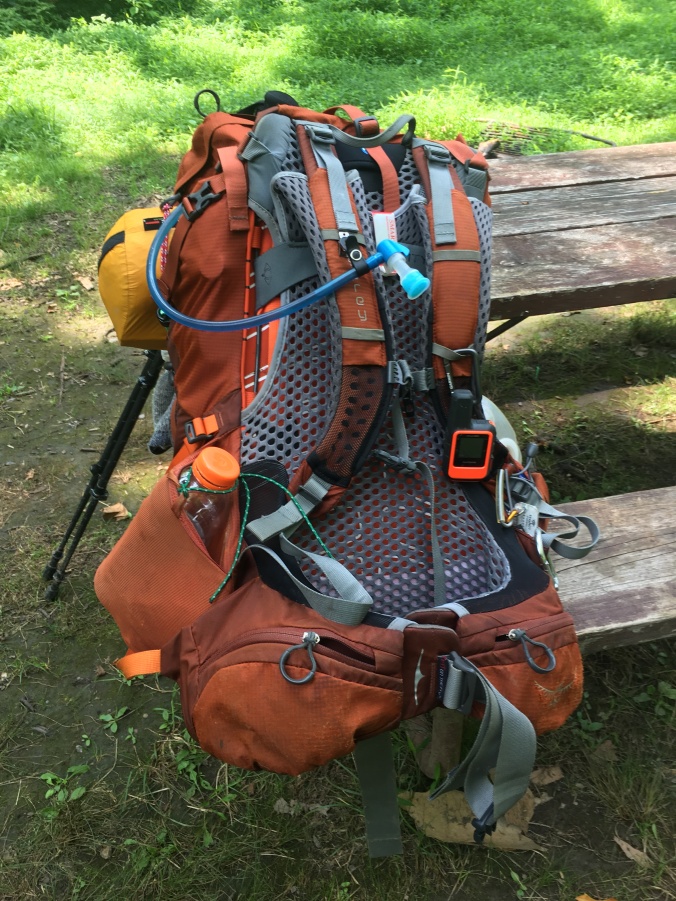 Accordingly I packed 10 days worth of food.  My pack weighed 30 lbs. full up including four lbs. of water in the bladder.  That’s a lot for summer when I usually schlep something closer to 20 lbs. 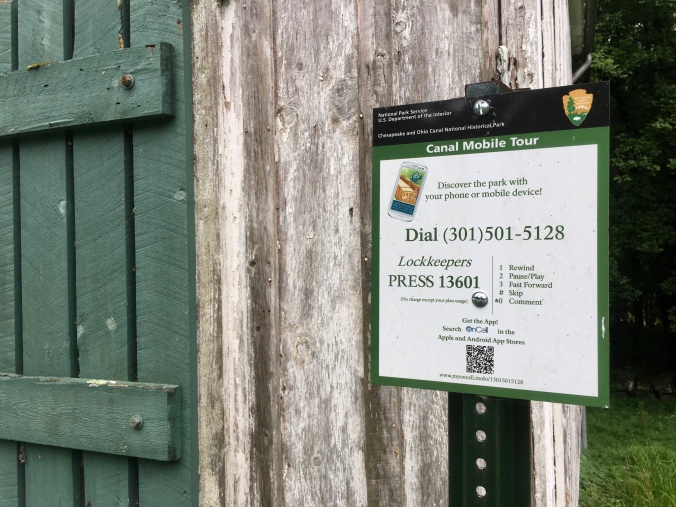 The C&O is full of history which has been curated by the National Park Service.  We need a funder for a similar initiative on the AT. 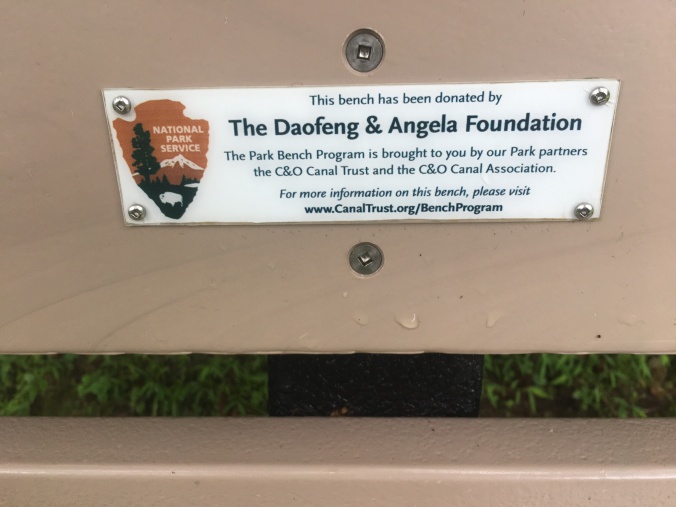 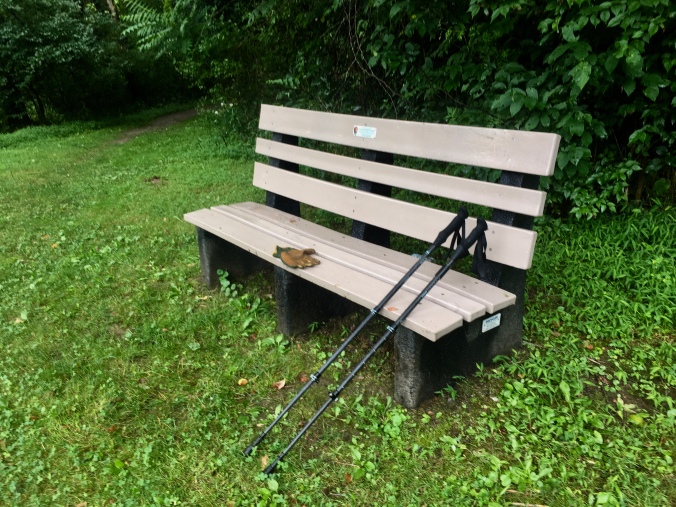 National Parks are a good cause, but it may surprise most citizens to learn how much the parks depend on volunteers and donations.  Without volunteers and philanthropy our national parks could not continue as we know them.  I wore the glove on my left hand to cushion the surgical scars from my hand surgery five weeks ago.

Lock keeper’s house.  The canal closed in 1924 and it is surprising how much of its infrastructure survives.

There’s an old mule barn in the distance.  Boat owners usually kept two mules hauling and two resting on the boat while boarding others along the way.  The sign says they would often get their animals back skinnier than when they left them because unscrupulous livery stable owners would feed short rations. 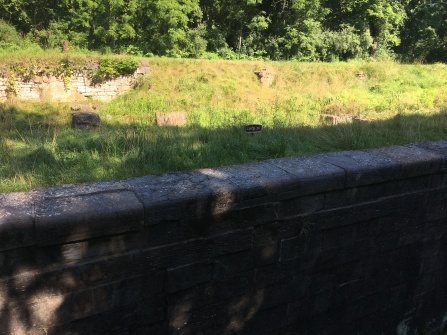 Most locks are preserved for appreciation.  A few are overgrown and barely visible.

“Please stay off the ruins,” the sign says.  Of course there was a well-worn pathway to the ruins. 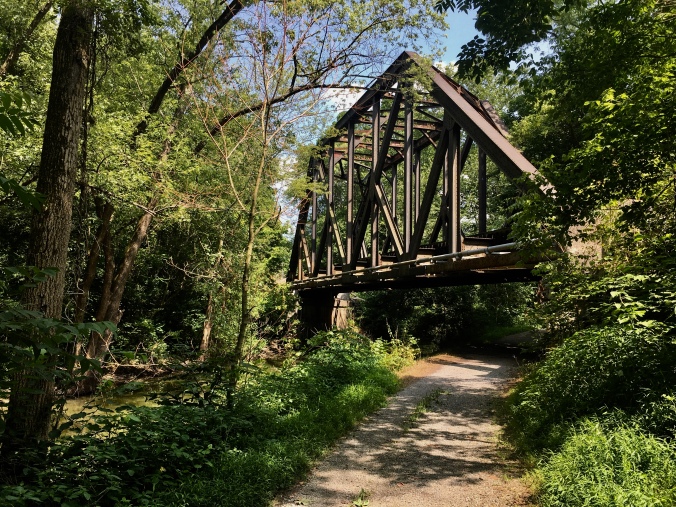 Active train tracks.  When George Washington proposed building the canal, he could not have anticipated the invention of the railroad which paralleled the canal route even before the canal was finished.  Thereafter, canal boats shipped mostly coal rather than the full range of commerce originally anticipated.  Sadly, the C&O was obsolete before it was done. 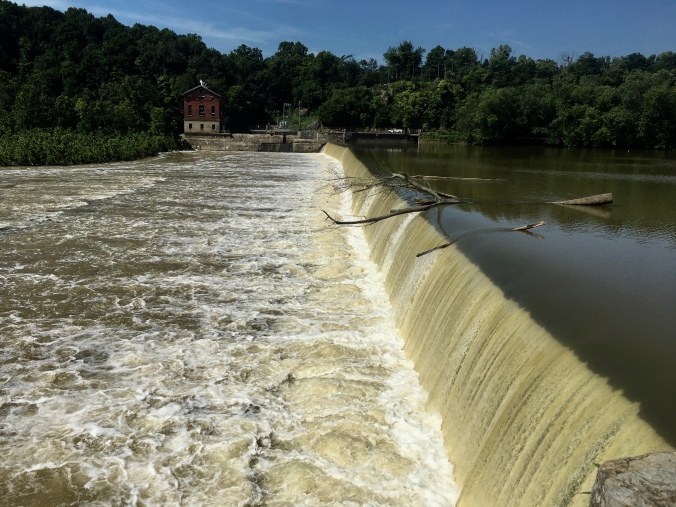 Some of the old infrastructure is still working.  The power plant still generates power. 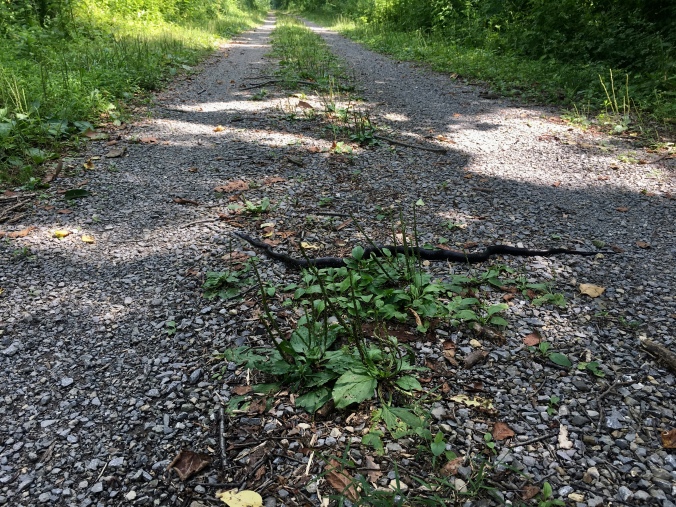 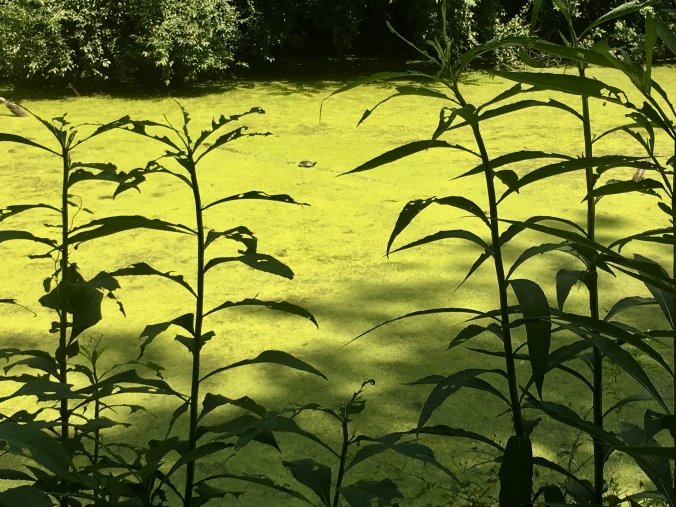 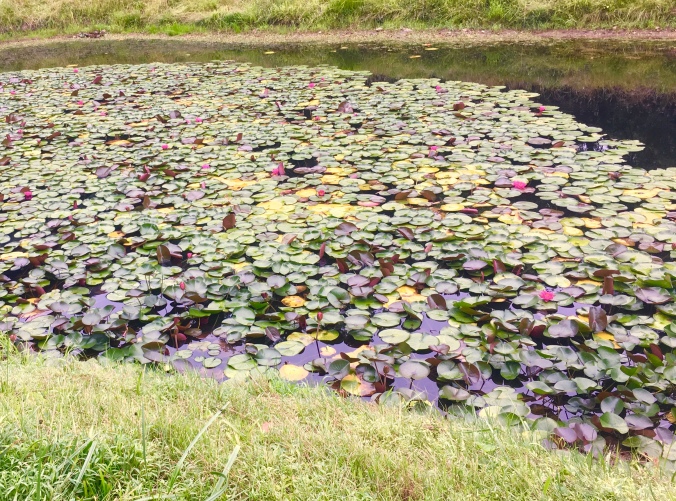 We saw a couple of friendly black snakes, a few deer, squirrels, turtles and water fowl, but not much else.

Enough of the park.  Here’s the people story. 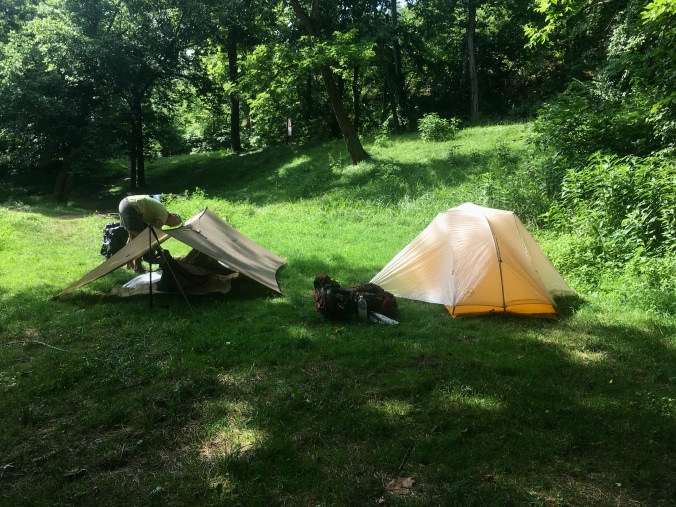 After a hot day, the first night we set up at a decent campground.  Later a couple on bicycles joined us.  Cindy is a hammock hanger.  In the absence of trees Cindy pitched it as a bivy.

With T-storms in the overnight forecast, sweat soaked clothes hang in your tent which has places to attach lines for that purpose.  The rain and thunder drummed all night long.

Yup.  It rained.  Everything inside was dry. 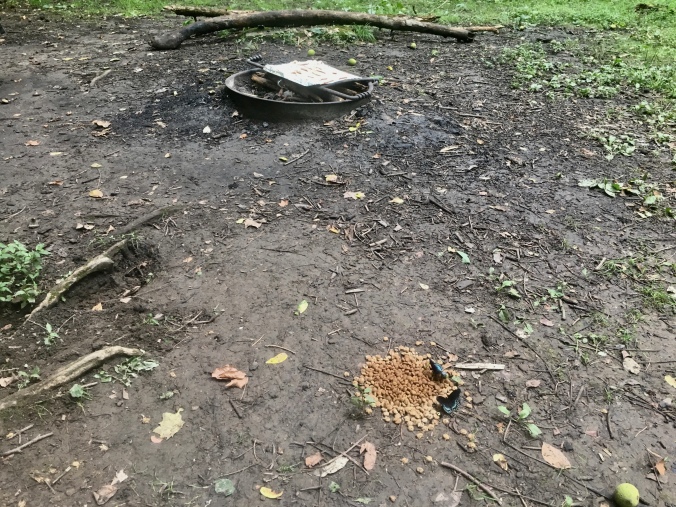 Midway through day one, we discovered abandoned bacon and dog food at a campsite.  We thought it interesting that the dog food attracted butterflies, but that the bacon was undisturbed.  In fact, we saw lots of raccoon tracks in the tow path mud.  However, in spite of being in bear country, we saw no bear sign whatsoever.  It appeared the camper couldn’t start the fire. 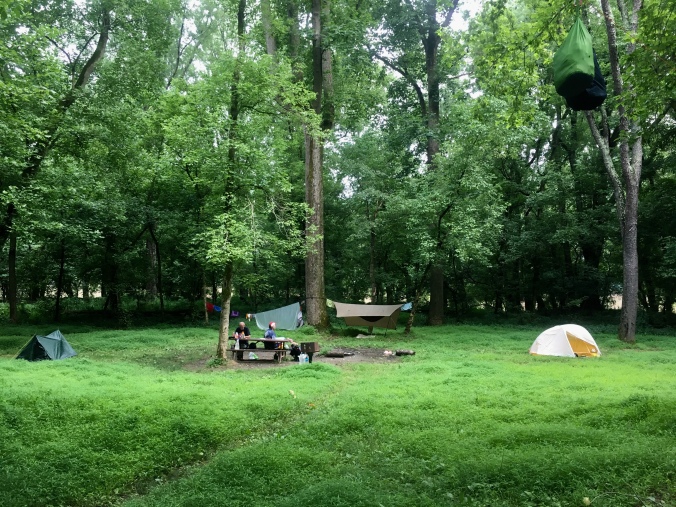 In spite of the absence of bear sign, we hung our food anyway.

After a respite from the rain allowed us to pack up in the morning, the skies then opened in offering of a day-long baptism of our march.  Note the clothes line behind the picnic table where we hung our stuff out to dry including the plastic ground cloth from Cindy’s bivy.

When I pulled off my sopping socks, my feet were wrinkled and white.  They’d been aching a bit during the day, but I attributed that to the hard-surface walking.  Upon inspection I had developed blisters on the soles of both feet.

This is a first.  I haven’t had a blister in 30 years!  Blisters on the soles of your feet are no joke.  By morning my feet were dry and the pain was tolerable, so I changed into dry socks and thought I was good to go. 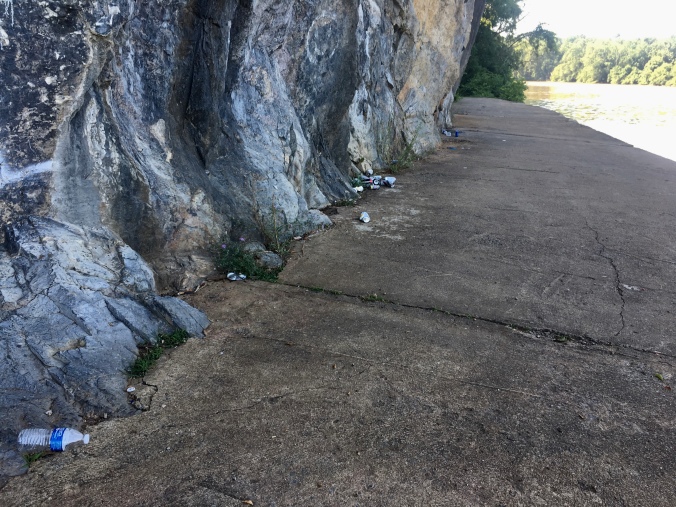 Trash on this trail proved to be a feature rather than a bug.  Bikers are pigs.  The park supplies plastic trash bags at each campsite with instructions to pack it out.  Of course Leave No Trace educational signage was nowhere to be found.  Information on Leave No Trace outdoor ethics at this link.

At noon on day three we stopped for lunch and to change my socks.  The heat and humidity induced profuse sweating.  To my surprise, my feet we again white and wrinkled with a cottage cheese appearance.  The blisters were worse.  I was in trouble. 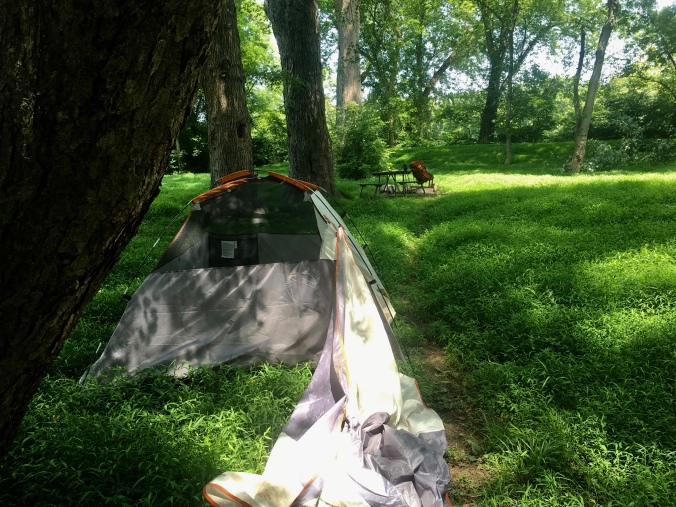 Finding abandoned cheap tents isn’t surprising to experienced hikers.  My bet is that someone either got soaked in the previous rain or did not want to carry a wet tent.

As the day progressed, the walking grew more painful.  I felt like a bird with a broken wing.  Fortunately vitamin I (Ibuprofen) took the edge off.

We discussed my ability to continue.  The next day we’d be passing through the town of Williamsport where we planned to grab lunch in what turned out to be a stereotypical dive bar that served a delicious burger.  That’s where I’d need to decide.

They were rebuilding flood-damaged part of the canal in Williamsport forcing a detour through the town.  We had stopped at the campsite closest to town where I inspected my feet.  The left was tolerable.  The right was a clear no go.  If the skin sloughed off, I’d be unable to walk and might require an embarrassing rescue.

As it happens there’s a C&O Canal visitor center in Williamsport.  That’s were I slipped my pack off my shoulder for the final time with only 60 miles on my odometer.  I limped inside and called for the hour-long ride home.  I must have looked pathetic.  The people at the center tried to cheer up a disappointed visitor who had failed his partner.

Cindy’s trail name is Song because she sings at any prompt.  She’s a walking parody of a Hollywood musical.  At one point, after reminding me that a mutual friend noted that her hiking partners tend to have bad luck, she launched into Queen’s 1980 hit, “Another one bites the dust.”  Well, as it turned out, that another one was me.

The good news, I’m meeting Cindy and our mutual friend, and her new partner, Janice in Harpers Ferry Saturday morning for breakfast.  It’s the least I can do.