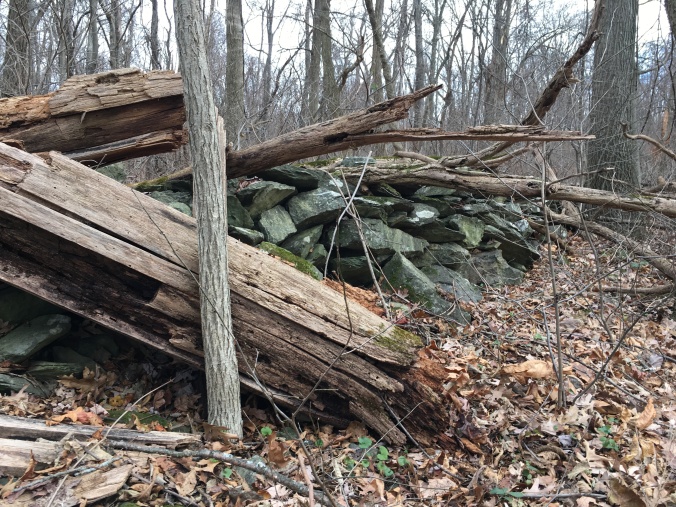 Stone walls evoke a certain nostalgia for hopeful yeoman farmers long since passed into history.  The truth is that most of these walls were built by slaves who enjoyed no hope at all.

It was Black Friday and all through the world, the shoppers were teed up to give it a whirl.  The hikers instead would rather not fight, we would go walking with nature’s delights.  And so we did.

The ever-flexible Gang of Four tentatively planned a Black Friday outing.  This iteration was minus two.  Alexis and Catherine were out of state at family celebrations.  Being working journalists, their free time is limited, especially in news-rich times like these.

Tina and I decided we were going anyway.  Her demonstrated determination on this trip and others earned her the trail name “Bulldog!”

We decided to do the Maryland Road Scholar route.  It’s rich with Civil War history, mostly gentle, and has a nice viewpoint.  At nine miles, it’s just long enough for a good workout with delightfully civilized start and stop times.

Note the knit cap.  I could not resist noting, as a Red Sox fan, I have several.

After dropping a vehicle at the end point in Gathland State Park, we displaced northward to Washington Monument State Park.  There we dashed up the hill for a quick selfie at the monument to memorialize the start.

The weather was a crisp 34 F with a light wind.  The scattered clouds feathered some of the sun.  They ultimately evaporated allowing the sol’s rays to befriend us as the temp climbed to the day’s high of 46 F. 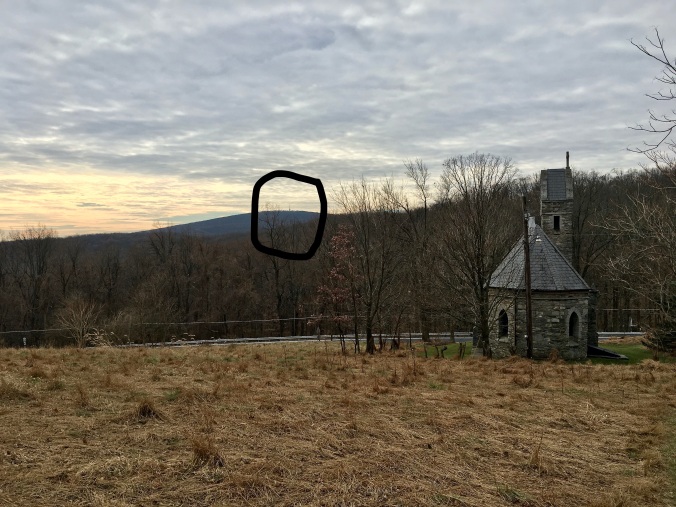 The route is rich with trail candy.  The first highlight is the Dahlgren Chapel, at Turner’s Gap, immediately followed by the Dahlgren campground, then Fox Gap, Rocky Run Shelter, the White Rocks viewpoint; with an end at Crampton’s Gap.  The lot of it is on South Mountain, the site of several Civil War battles. 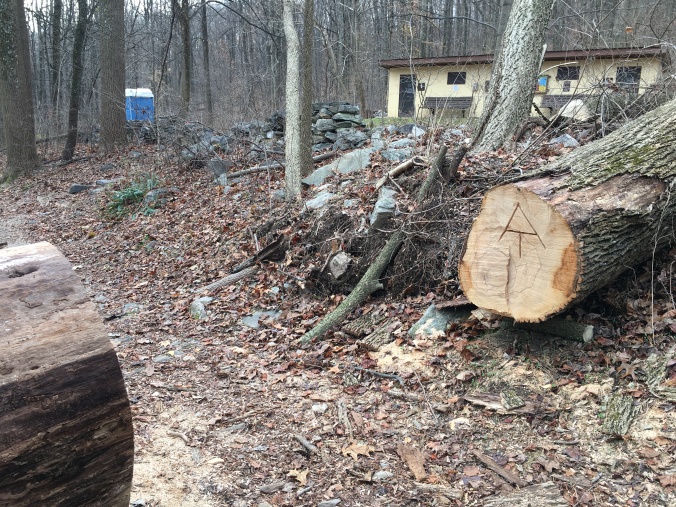 The circumference of this blowdown was in the neighborhood of 30 inches.  For scale, the longest bar I have for my chainsaw is 20 inches. 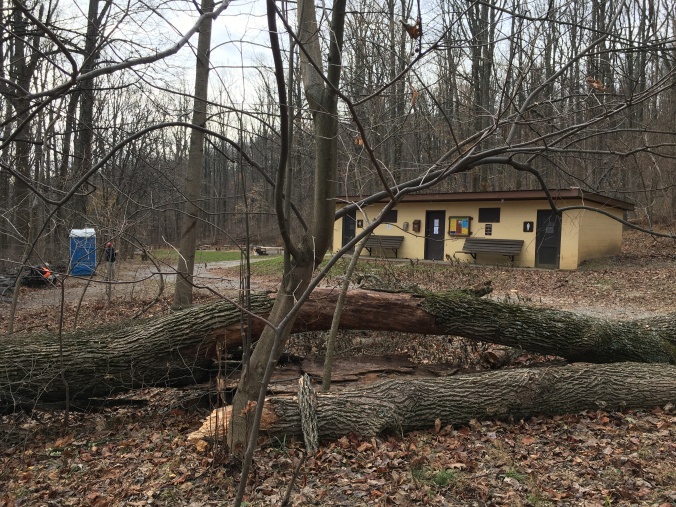 Another view.  It’s the devastating work of the emerald ash borer.

We’ve recently had severe winds which knocked down several trees and large limbs.  We were able to clear three small blowdowns with my hand saw.

The “Bulldog” on the attack.

Just after the viewpoint we found an 18-inch blowdown.  That’s way too large for my hand saw, so I reported it to the local trail maintainers.

What was this camper thinking? The stuff seems carefully arranged as if cached for later or for someone to find.  Love the socks.

The hike was almost over except for the walk out.  There we were, loping along, looking forward to our traditional post hike burger and a beer, when off to our right was this.

Weekend warriors have a some redeeming values.  For one, they’re out there trying to appreciate nature.  For far too many of them, that’s about it.  Their ignorant behavior overcomes the rest.

For anyone in the ridgerunning world, it’s easy to deride these guys – yes, they’re almost always men. The synonym for ridgerunner is janitor and this exemplifies one of the reasons why.

Women weekenders have few exceptions, they always take a more informed approach.  They do their research, plan ahead, prepare and take care to leave wildlands better then they found them.

Bubbas, on the other hand, are a literal mess.  They fit several cultural identities and stereotypes – lumber-sexuals, cammo-sexuals or ammo-sexuals; preppers and survivalists; middle-age boy scouts; or sometimes the unfortunate homeless.

In no case are these folks educated and aware of how to Leave No Trace.  In every case and  everytime I stumble upon a mess I have to clean up, I ask myself, “What were you thinking?”

The perp who’s the subject of this rant left a 1960s vintage Optimus 8 stove.  I had one in the early 1970s.  The food selection included military MRE packets, sardines, Ramen noodles, instant oatmeal, coffee, a spoon, and assorted other stuff.  Way too much for even a four-day hike if the hiker started Thanksgiving eve.

Here’s the issue.  Had this person planned ahead and prepared, Maryland’s rules would have been familiar.  They are posted at every trailhead, online, and in guide books.  No camping or fires except at designated shelters or campgrounds such as Dahlgren. This was an illegal campsite located less than one-third of a mile from the Crampton Gap shelter which has lots of good secluded campsites.

The current fire danger is high and insufficient space is cleared around the fire ring.  Lastly, you pack it in, you pack it out.  Otherwise it’s animal food.  The volume was approximately three gallons which we wrapped in my pack’s rain cover.  Bulldog schlepped most of it out.

After our burgers and beer, the sun was dropping as fast as the temp when we shuttled back to my car at Washington Monument.  Fade to black, Friday.

Vienna, VA. November 20, 2019 — The Potomac Appalachian Trail Club’s annual awards banquet offered yours truly a wonderful surprise in the form of the club’s highest honor, the Myron Avery Volunteer of the Year Award.

“Named in honor of the founder of the PATC, the Myron Avery Award recognizes a substantial achievement by a PATC member who most exemplifies the spirit of volunteerism through his or her contribution to PATC during the past year. This is the highest honor bestowed upon members of the club and is awarded to the PATC volunteer who most exemplifies Mr. Avery’s dedication and devotion to PATC’s mission. The contribution can be to any type or combination of club service activities, e.g., devoting many hours above and beyond the norm to service activities, including travel time, or making an exceptional contribution to a particular project.”*  Avery also founded the Appalachian Trail Conservancy.

Volunteers are the heart and soul of the AT and our national parks.  About 250,000 volunteer hours annually are needed to keep the AT properly maintained and open.

Thousands of volunteers across 14 states, hundreds from the PATC alone, give what they can in time, money and sweat for a labor of love.  I’m proud to be counted among them.

Appalachian Trail, November 9, 2019 — About this time every year, next year’s thru hikers start the food storage debate.  Some are going to hang it.  Some are going to carry bear canisters.  Others argue for Ursacks.  A few brave Darwin Award candidates claim they’re going to use their food bags as pillows.

The fact is that most shelters on the AT don’t have bear cables, bear poles or bear boxes.  Of those without, many are surrounded by trees the limbs of which are so high that a NFL quarterback might have difficulty tossing a line. 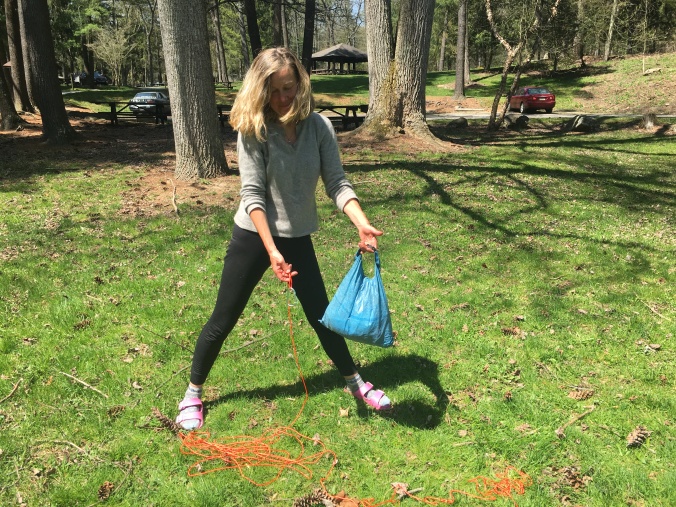 The discussions tend to proceed along emotional rather than practical lines.  The contrarians definitely assert themselves.

The list of practical reasons to seriously consider how to protect your food is getting longer.  On the AT, only bear canister requirement is for a short distance on Blood Mountain. It can easily be avoided by camping at the Lance Creek campground.  It’s an easy hike on into Neels Gap the next day.

The bear canister requirement on Blood Mountain was created when bears learned to shake food bags off the bear cables at Woods Hole shelter.

The AT Conservancy is highly recommending bear canisters along the entire AT HERE  because the number of food-related human/bear encounters is growing.  Here’s what the AT Conservancy had to say about bear incidents 2018.

Bears do what human’s teach them.

Sometimes what happened before you came along matters most.  This tent had no food.  The bear learned that some tents have food, so it opens them up to check.  Other bears routinely enter shelters to forage and take what they find.

Before we discuss canisters and Ursacks, the PCT bear hanging method is worth a mention.  Done properly, it is effective.  The problem is that too many people improperly hang their food and then blame the bear that took it.  PCT Bear Hanging Method is at this link.  You Tube:  Here. 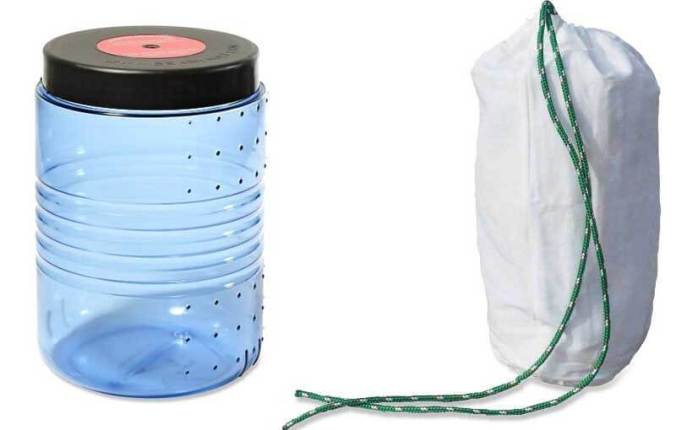 Now lets try and not to start a WWE match over canisters vs. the Ursack.  Each has practical considerations plus strengths and weaknesses such as size and weight.  Both should* be tied to trees so that bears can’t carry them off.

*Clarification:  One manufacturer does not recommend tying bear cans to trees.  The NPS is ambiguous.  The concern is that nothing should be done that would permit bears to get leverage that would improve their chances of opening the canister.  I’ve had a bear cart one away that I was unable to find.  Thus, you’ll find me with my bear can tied to a tree with a long rope well away from camp.

Ursacks must definitely be tied to a tree to be most effective.*

THIS IS NOT A COMPLETE COMPARISON OF ALL BRANDS OR MODELS.  IT’S PURPOSE IS TO HELP YOU THINK YOUR WAY THROUGH YOUR CHOICE OF BEAR PROTECTION FOR YOUR FOOD. Google is your friend.

Canisters:  Canisters are the most foolproof but can be difficult to fit into your pack.  I had to upsize to a 65 liter pack to practically fit a Bear Vault 500 and the way I like to pack my other gear – in waterproof stuff sacks rather than packing it loosely around the canister. My normal pack is 50 liters.

The BV 450 is smaller and an easier fit.  Since it will hold four days worth of food, we issue it to our ridgerunners who are normally on the trail for four nights and five days.  For many, it’s a best value.

Other canisters such as the Frontiersman Insider Bear Safe are longer, thinner, and a bit more practical, but also heavier.

Bearikade carbon fiber canisters are several hundred dollars but cool as hell. Check them out. 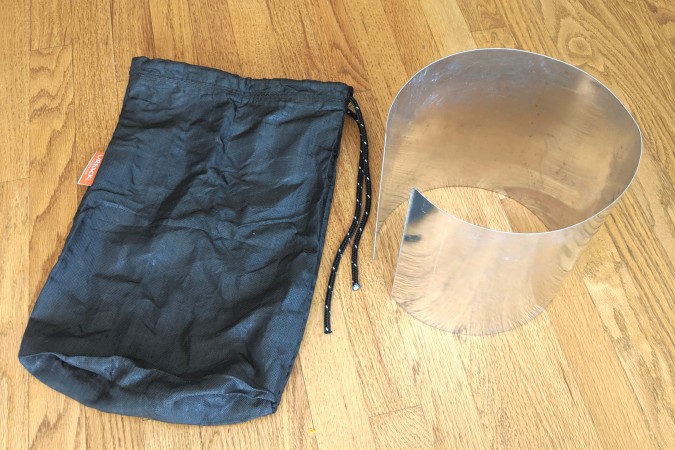 When combined with an aluminum sleeve, Ursacks are highly bear resistant.

Now for the dark side.  None of these methods is perfect.  I know, you’re shocked.  Bad hang and the bear gets your food.  They also have been known to break into containers or destroy food inside Ursacks.

Bad news for a Bear Vault. 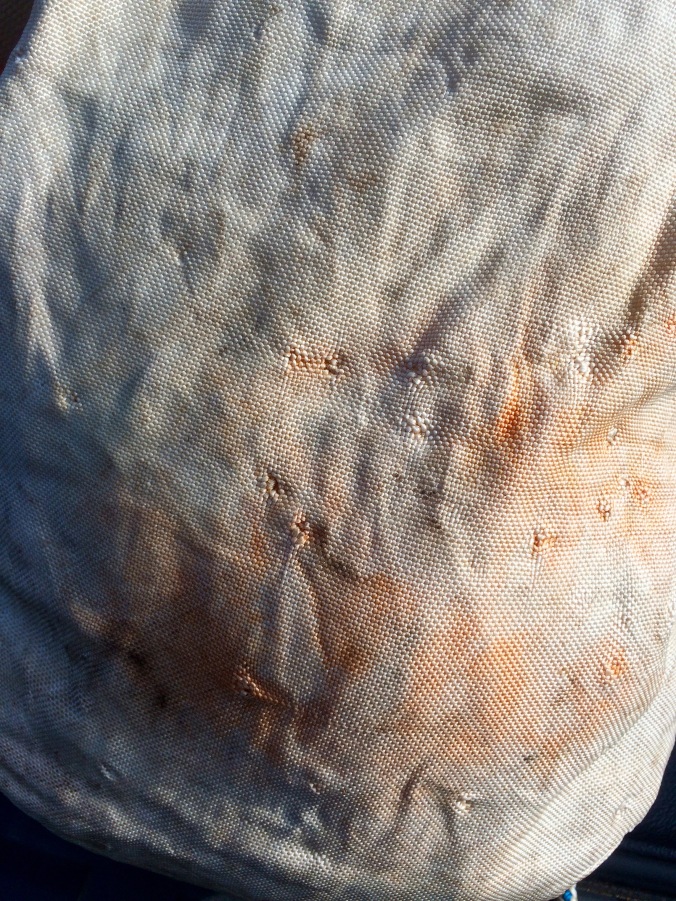 The bear got a taste of Sriracha. 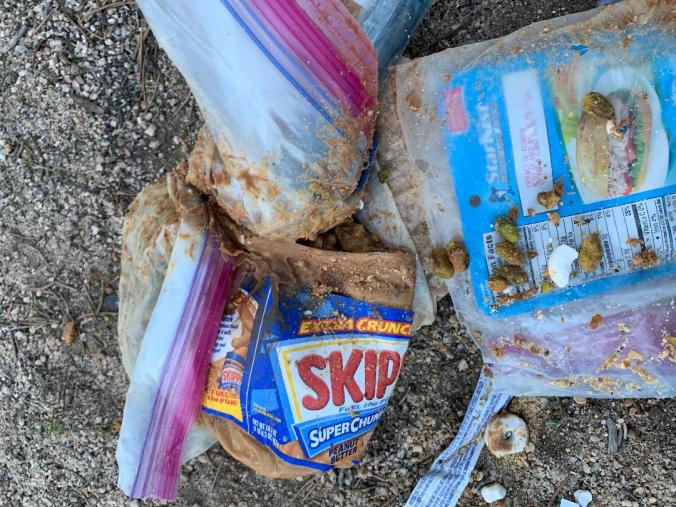 What ever you do, check out the containers approved by the U.S. government’s  Interagency Grizzly Bear Committee.  They are the only containers allowed where food protection is required out west, the John Muir Trail for example.  There are many more brands and models than those discussed here.    Certified Bear-resistant Products.

The Forest Service, Park Service, BLM and others really do care about your safety.  Their certification helps you sort through the marketing hype and the trolls’ bullshit.

In may sound like a cliche, but a fed bear is a dead bear.  Let’s do what we can to keep our bears safe, ok?