Shenandoah National Park, September 16 – 19, 2021 — Trail maintainers don’t grow on trees.  We make ’em.  The Potomac Appalachian Trail Club has a good track record of teaching the variety of skills volunteers must know to do the needed work; in the right way, and safely – everything from the use of traditional tools and chainsaws to rigging. 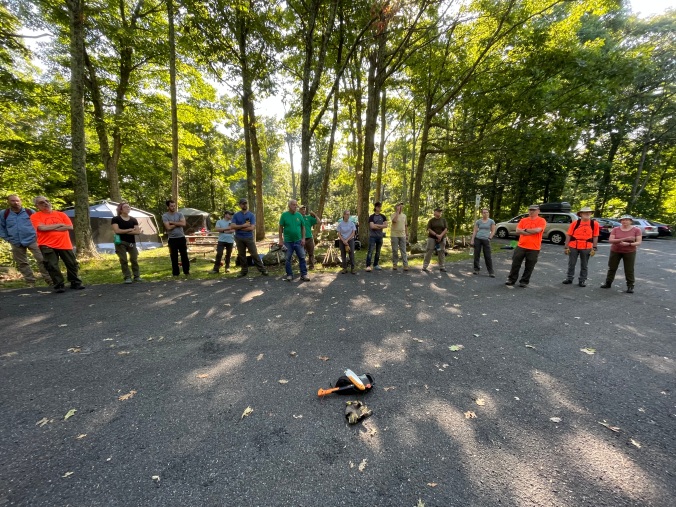 For more than 30 years, the North District Hoodlums trail crew has organized a skill development workshop in September.  The workshop is designed to train people, from fresh first-timers to those with advanced skills, for the challenges they can expect to encounter doing trail work.  We can accept up to 30 participants.

For sure, trail work isn’t rocket science, but it isn’t an amateur sport either.  The necessary tasks, techniques and procedures are spelled out in manuals and policies.  Knowing what to do and where and how to do it are important if your goal is to protect and preserve the physical trail itself.

Above all is safety.  We use heavy tools, sharp axes and pruning saws, rock hammers, and chainsaws.  We lift heavy logs and rocks.  We skew older.  While we are covered by workman’s comp; it’s best not to test its limits.

Workshop preparation starts a year in advance when the workshop coordinator reserves the space in the Mathews Arm campground.  S/he reviews the lessons from the previous year and discusses them with the various leaders within the Hoodlums crew.  During the summer with September on the horizon people apply, projects are identified, and project leaders appointed.

Several of us came up early to help split firewood, collect and organize the needed tools, and generally help our fearless leader.

For the past 15 years Mark Nebut, who is a professional chef, and his brother and sometimes other family members have cooked scrumptious meals to which we look forward with great anticipation. Note the Coleman propane coffee pot.  This is big time glamping for us.

Other brother Dave Nebut recently took charge of the workshop as our organizer in chief.

We divided into three work groups.  The advanced and novice groups continued our summer project on Compton Peak.  I led the basic (first timers) group on Pass Mountain.  Ironically, we were working on the first and last mountains in the north district. 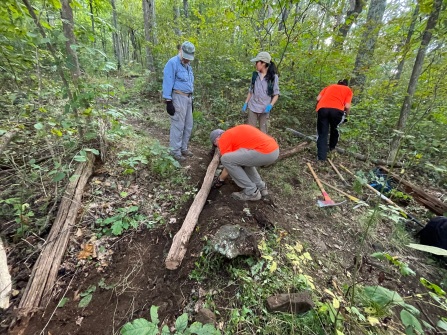 The basic group totaled six including me.  We gathered at the Beahms Gap parking lot where we introduced the group to the tools we’d be using and the work we’d be doing.  First the work was demonstrated, then the group members each attempted to replicate the results themselves.

We cleaned or replaced 30 check dams and 24 waterbars.

We also built a rolling grade dip.  That’s a waterbar (drain) that is made of a dirt swale instead of logs or stones.

All told we racked up six hours worth of high energy work which was emblematic of this crew’s enthusiasm.  It was a fun day. 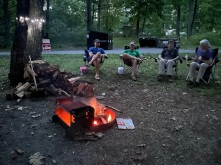 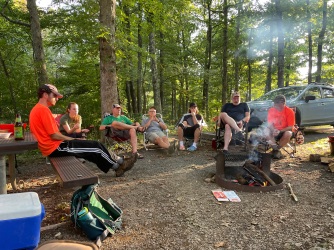 What do you do after a day of hard work?  What else?  Gather around a campfire and share stories.  We made a decent dent in the wood pile. 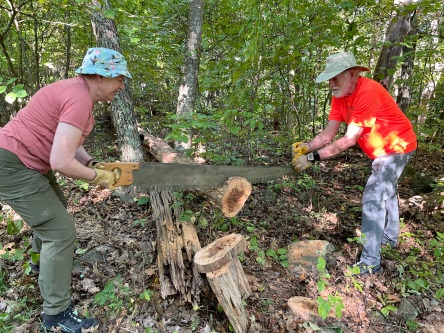 Sunday featured a half day of classes on how to build a rolling grade dip, the use of string trimmers and swing blades, and on crosscut saws.  The lunch that followed capped the day. 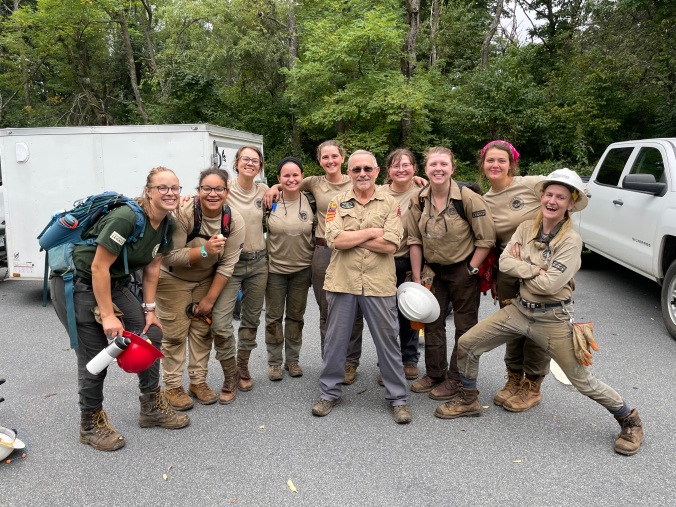 The Thursday before the workshop was my lucky day.  An Appalachian Conservation Corps (ACC) crew needed a project and I had one ready to go.

The section I maintain sustained some serious damage from a microburst storm right after Hurricane Ida.  The sandy soil had silted up the water control structures.  Immediate repairs were needed to prevent severe erosion.  My Hoodlum colleague Cindy Ardecki helped lead the project.

The ACC crew is an all-woman AmeriCorps group composed of recent college graduates in subjects such as forest ecology, bio science, environmental science and the like.  Listening to their conversations was fascinating.  Most of them joined the ACC for the experience and help deciding on the direction they wanted to pursue for their careers. 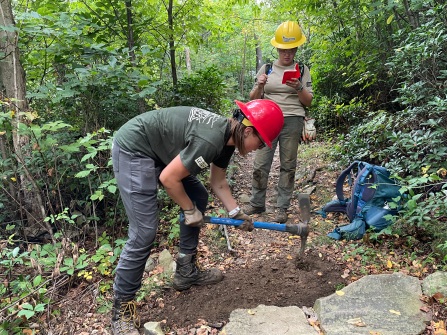 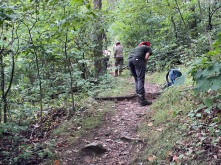 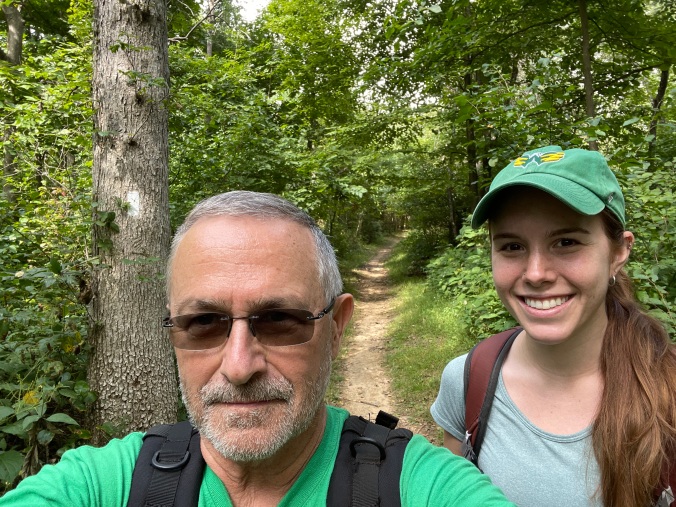 Beauty and the Beast

Breaking news:  The section I’ve been maintaining since 2015 now has a co-maintainer.  Caroline Egli joined the Hoodlums this summer.  She’s eager to learn more about trail maintenance and I can use the help.

After the workshop we hiked what is now our section and discussed the recent work and the work that needs to be done before winter.  For example, once the leaves are down, the waterbars have to be raked out to keep them open.  I normally do this on Black Friday.  Beats shopping.

Otherwise, most times you’ll find us working either the Friday before or the Sunday in conjunction with Hoodlums work trips.

Once in awhile the views from Skyline Drive are simply spectacular.

Next up:  A hike of the PATC AT 240 from Rockfish Gap to Pine Grove Furnace State Park, PA.  It starts Friday.  The purpose:  Put a dent in the COVID 15 muffin top.

Shenandoah National Park (mostly) August 26 – September 14, 2021 —  Come Labor Day the summer chapter in our trail story ends and the page turns toward autumn.  The cast of characters is down to one.

When the five o’clock whistle announces the Labor Day weekend wind down, the clock runs out for five of our six ridgerunners.  For them it’s time for next steps.  Two have taken seasonal work with the mid-Atlantic AT boundary monitoring team.  They check surveyor’s monuments to ensure that the bench marks and the witness trees are still there and search for encroachment on federal land.  One headed for Vermont’s Long Trail and there bumped into the ridgerunner who had her job in 2016!  Small world.  Witt returns to endurance running.

Branden is the last man standing, at least until Halloween.  Until then, he’ll patrol Maryland’s 42 miles during the week and spend weekends caretaking at Annapolis Rock.

This year’s team was particularly noteworthy for their dedication, teamwork, innovation, and extra effort.  Everyone associated with them will miss their enthusiasm and presence.

Meanwhile a lot happened before the story ended. 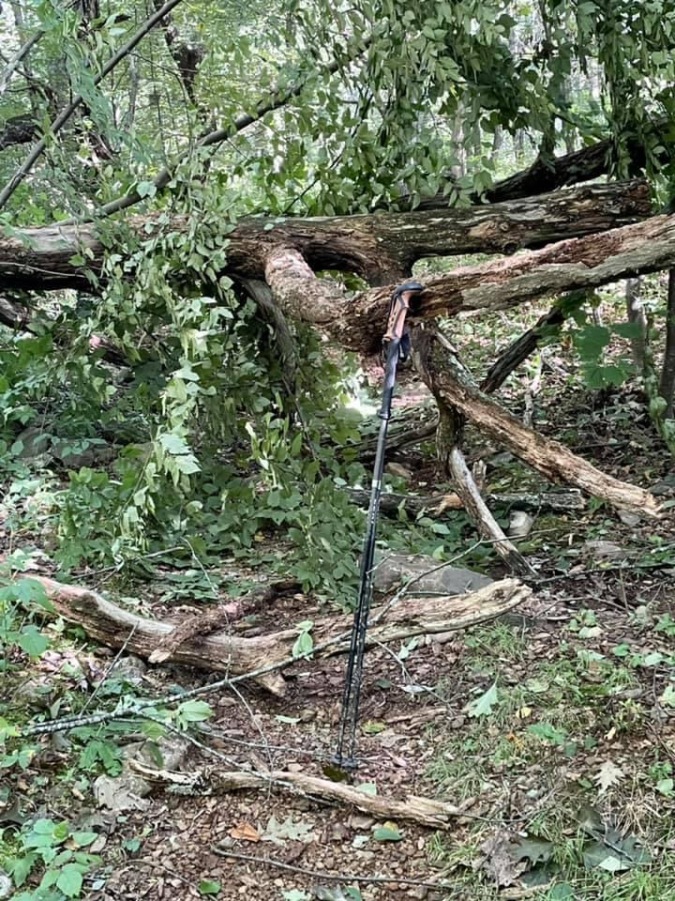 Chris reported this rat’s nest on the AT in the middle of the north district.

I had time to kill while waiting for Chris to catch up and swamp for me.  Sawyers are not allowed to saw without an assistant – to call 911 when we screw up.  That gave me  time to recon the blowdown and develop a plan of attack.  Along the way I was saddened to discover that my favorite tree in the park had passed.

I first discovered it on a foggy walk in April 2013.  Hikers spend more time looking down than up in order to keep from tripping on the ever present rocks and roots.  In the fog that day, the old oak startled me looking very ominous, reminding me of the Whomping Willow in the Harry Potter series.  I’ve loved it ever since.  Soon we’ll be sawing up its bits and parts and nature and gravity slowly reclaim it.

Chris’s did a great job using his folding saw to clear as much as possible to make it easier for hikers to pass. 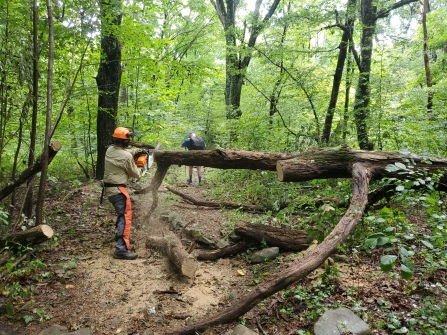 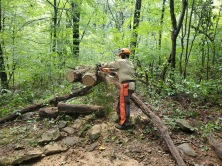 Chris acted as the swamper and moved most of the pieces out of the way.

The rest was a simple matter of converting gas to noise by chopping the thing up from left to right.  Now it’s history.  Elapsed time:  10 minutes thanks to the recon. 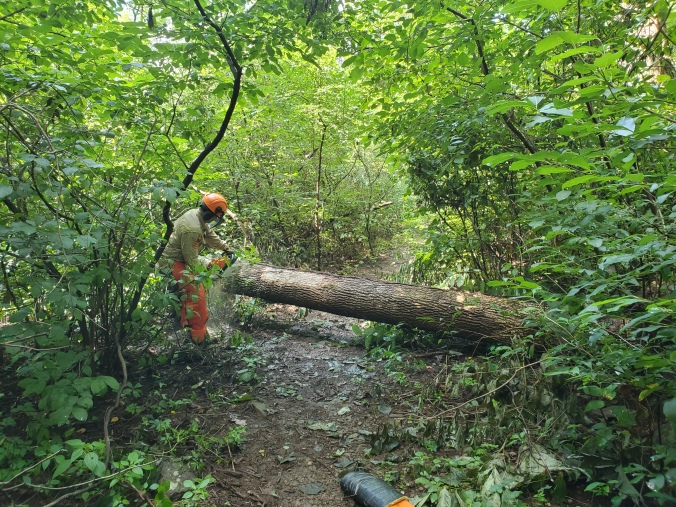 You stood tall next to the AT at Beahms Gap until you succumbed to the emerald ash borer.  Now you’ve got to go.  Since you can’t do it on your own, Mr. Stihl will help.

There’s a teaching point here.  Note how the tree is lying across the trail.  What you cannot see and neither could I is the tree’s crown.  There was too much vegetation in the way.  Here’s what happened:

The part of the trunk on the left side of the photo should not be expected to rise.  The tree was once very tall and the majority of its weight was across another blowdown parallel to the trail.  That blowdown acted as a fulcrum allowing the trunk to rise when cut.  Once in the air I could see clearly what happened.

This is not particularly dangerous.  We are trained to watch for possibilities like this.  Nevertheless, the day you think you’ve mastered the art of bucking blowdowns, you should think again.

Another blowdown in the history books. 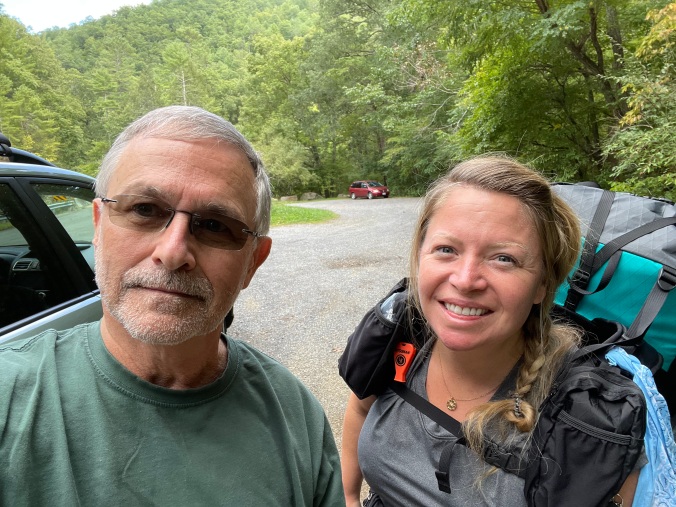 The next stop was dropping my friend Crissy at a central Virginia trailhead.  She’s walking 500 miles before moving to Colorado to be with her father who is ill.  I’ll join her in a couple of weeks to hike the last half. 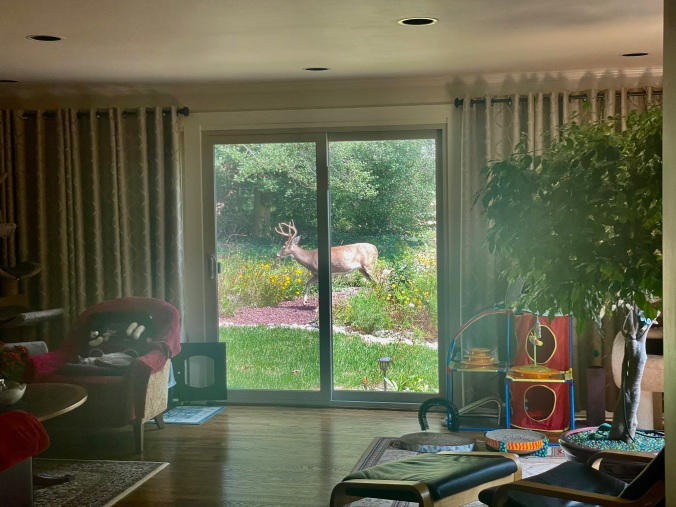 You’d think there would be enough nature on the trails, but noooooo. Backyard buck is chowing down on the landscaping to build strength for the mating season.  Note the cat in the chair. 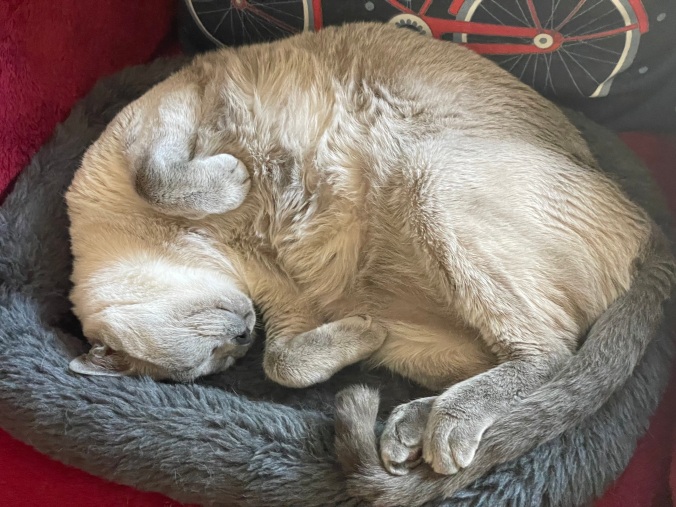 While the deer was destroying the flowers, the guard cat could not care less.