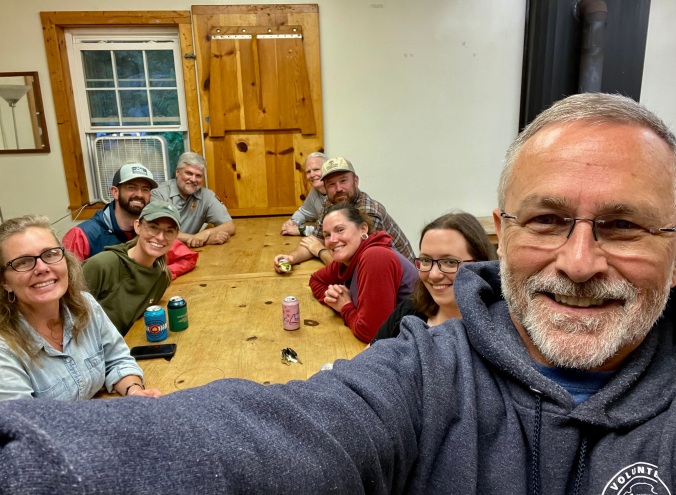 Appalachian Trail, Maryland, June 25, 2022 — The day after our monthly ridgerunner meeting at the Blackburn Trail Center, we headed for the hills with a crew from Maryland Public Television for their second trip to document the Appalachian Trail in Maryland. 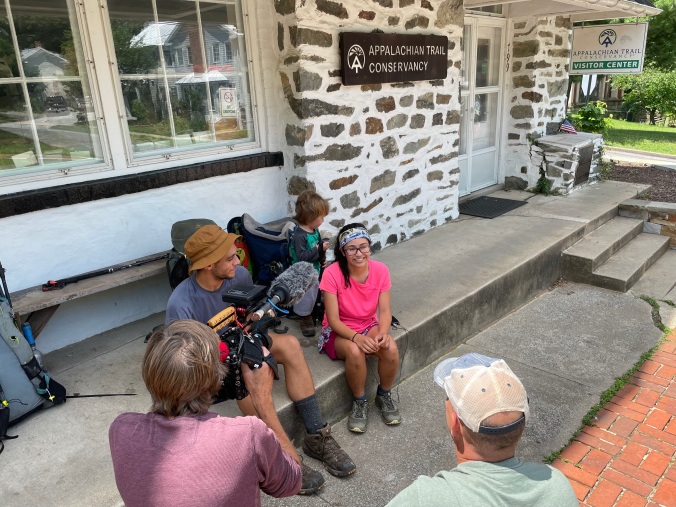 They are shooting a segment for “Outdoors Maryland” ( https://www.mpt.org/programs/outdoors-maryland/ ) a program “…produced in cooperation with the Maryland Department of Natural Resources. This award-winning series delights viewers each week with thought-provoking stories depicting the region’s diverse collection of ecosystems, people, and places…”

We started at the Appalachian Trail Conservancey in Harpers Ferry, WV where they found a family with a two-year-old thru hiking the trail this year.  So far they’ve covered more than 1,000 miles.  They have a large backpack and a child carrier which the parents switch off.  Yes, they are packing out the diapers.

We found two thru hikers hiding from the mid-day heat at Gathland State Park.  One just finished nursing school; the other is on her way to medical school.  Each is hiking from Georgia to Maine as part of their transition to the next step of their lives.

Next up was an unusually crowded Dahlgren campground for just after mid-day.  Dahlgren offers hot showers and porcelain plumbing making it a Cadillac stop in between towns.

Kasey did a long interview to supplement the one she did two weeks ago. 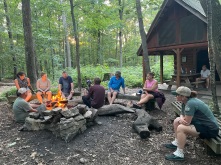 We finished up with a campfire at Raven Rock Shelter.  There’s one more shoot scheduled in the fall once the leaves have started to turn.  The program will be eight to 10 minutes long.  To produce that much air time, literally hundreds of hours of video needs to be shot.  The program will air over the winter and ultimately be available at the Maryland Public Television website.

The sleeping pad is tilted because several gallons of trash are wrapped inside.

Michaux State Forest, PA, June 15 – 19, 2022 — We have a split season in Pennsylvania this year.  Chrissy Funk is the bun wrapped around Wendy Willis’s burger in the middle.

Chrissy’s first ridgerunner tour ended last Sunday.  The next day her jeep aimed for North Carolina where she would reunite with her pampered pug, Zsa Zsa.

The day after Chrissy left, Wendy’s car crunched to a stop on the gravel near the Mason-Dixon Line in the Penn-Mar Park overflow parking lot.  From there we were shuttled to the Pine Grove Furnace General Store to begin her 37-mile journey back to Penn-Mar. 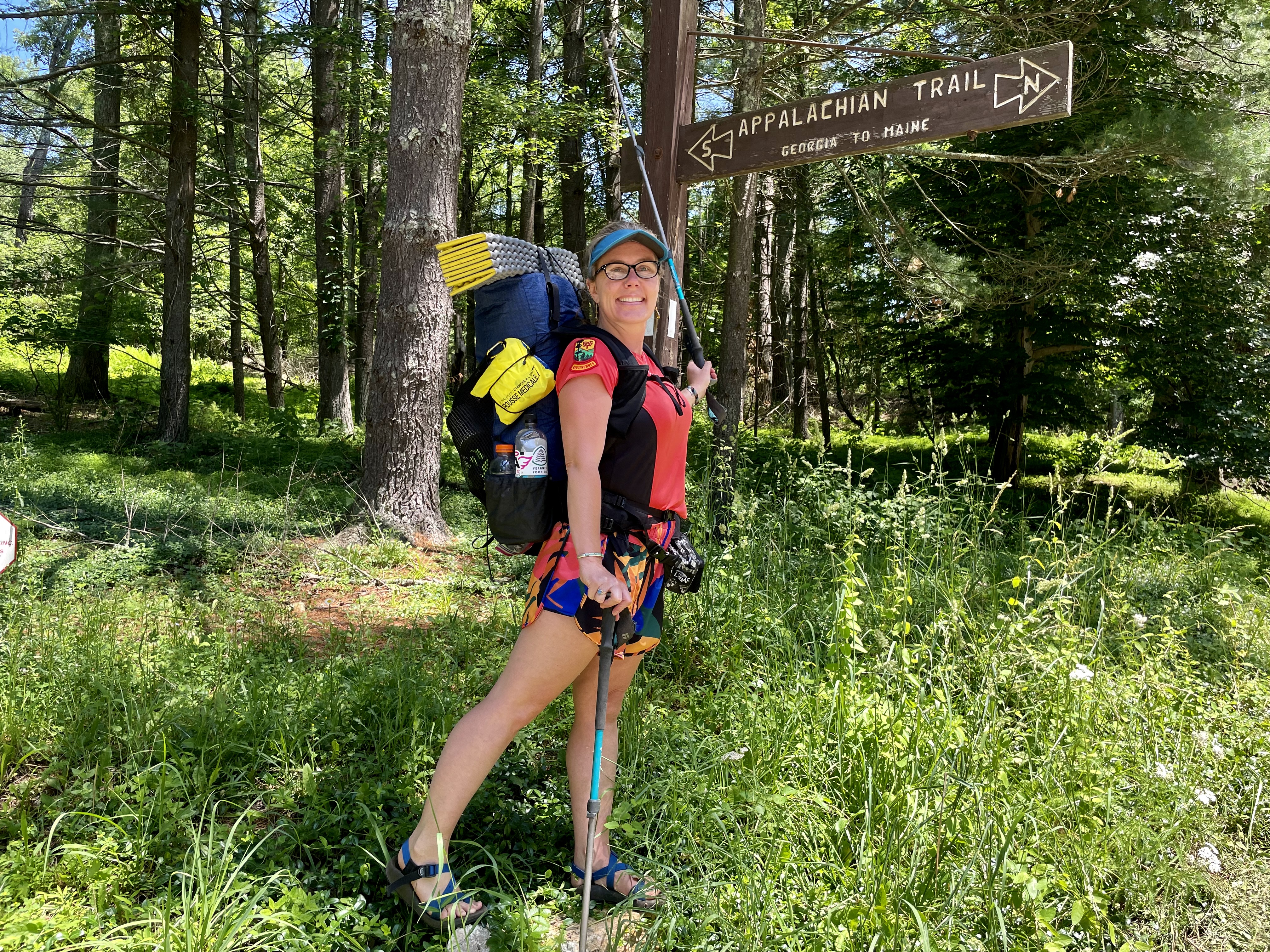 Wendy is an ornithologist who partly grew up in Mexico and most recently worked with a bird sanctuary in Peru.  She is a PATC trail maintainer in Northern Virginia whose Spanish and English are interchangeable.  She’s spending a month of her sabbatical this summer with us. 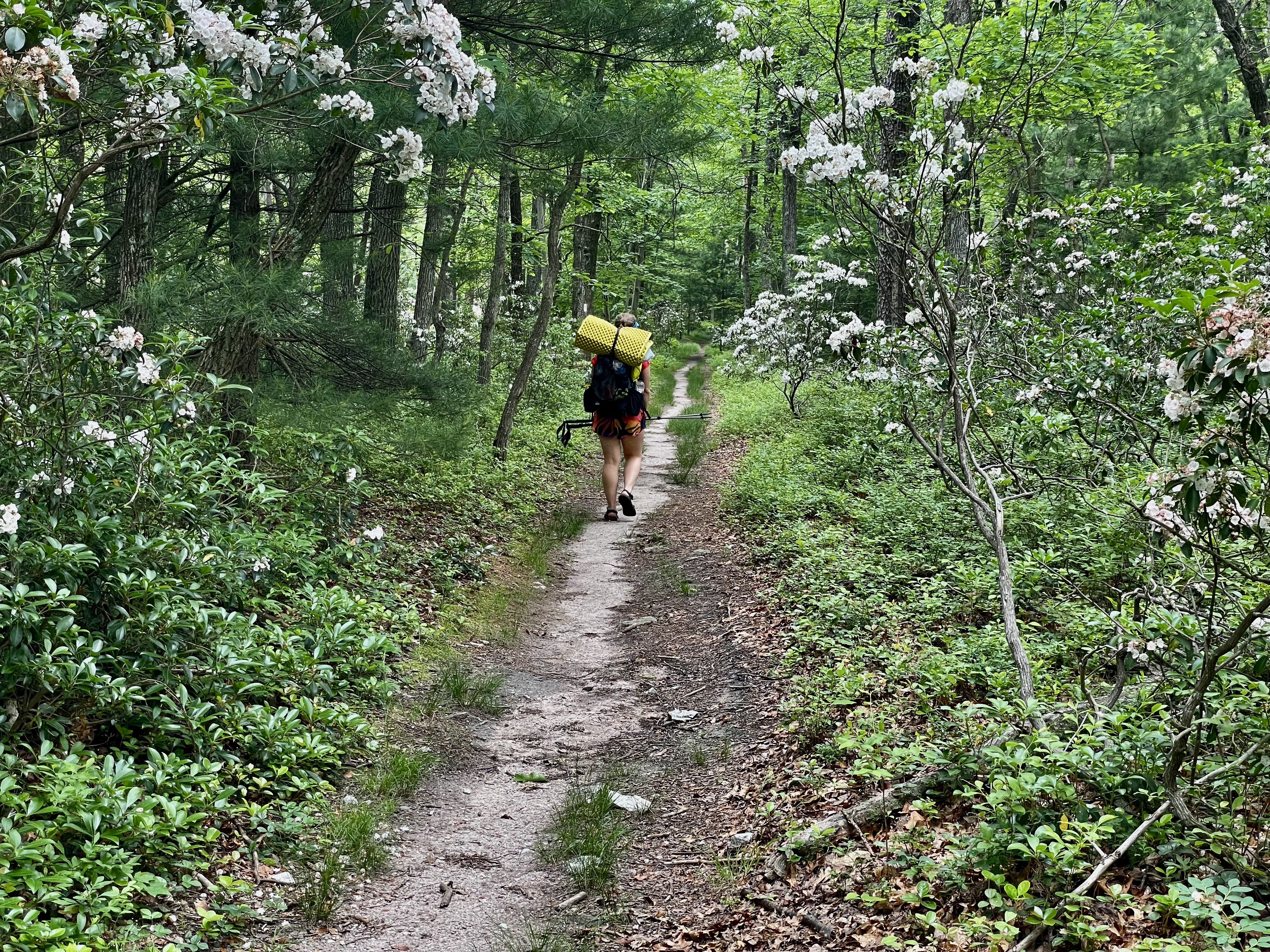 The first couple of days were humid as Hades with sweat dribbling down our noses like a leaky faucet.  It soaked our clothing which ultimately ripened into that mellow hiker essence we all know and love.

Someone’s TP got wet in the rain so, rather than packing it out, they parked it in a fire pit, maybe as future kindling?  Nice try.  No cigar.

The most common Leave No Trace aphorisms are “pack it in, pack it out” and “take only photos, leave only footprints.”  If people would do that much it would help.  Obviously stacking rocks surpasses leaving only footprints.  In our region rock stacks don’t survive contact with the first responsible person who finds them. 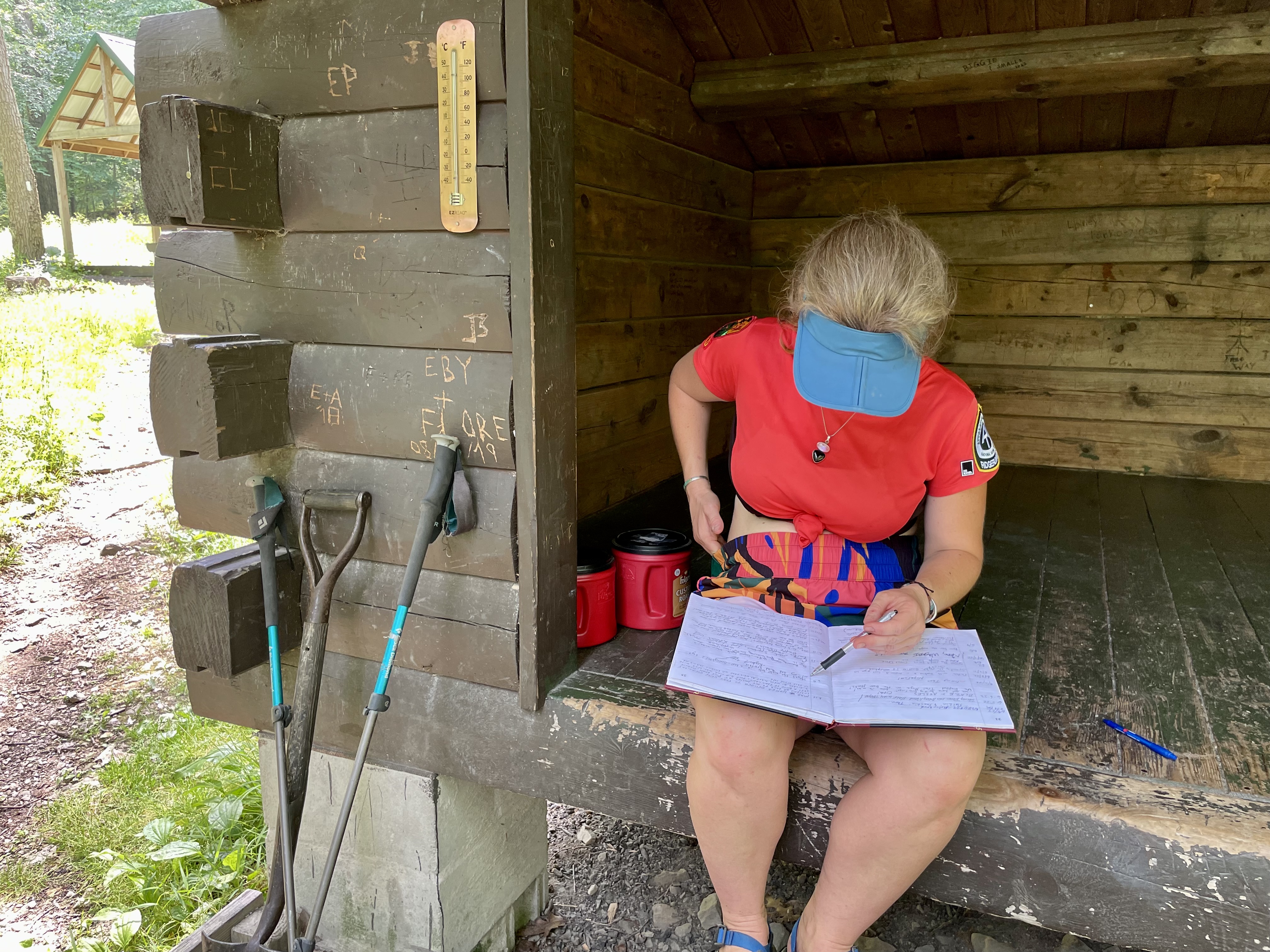 Wendy signs in and checks each shelter log book looking for any remarkable content.  The coffee cans behind her contained food left as trail magic for hikers.  Luckily it didn’t attract any animals before she had a chance to hike it out to a dumpster 20 miles to the south.

Breakfast at Birch Run and a little map recon of the day’s journey.

Wendy sawed this five inch obstruction and flipped it out of the way.  Her first. 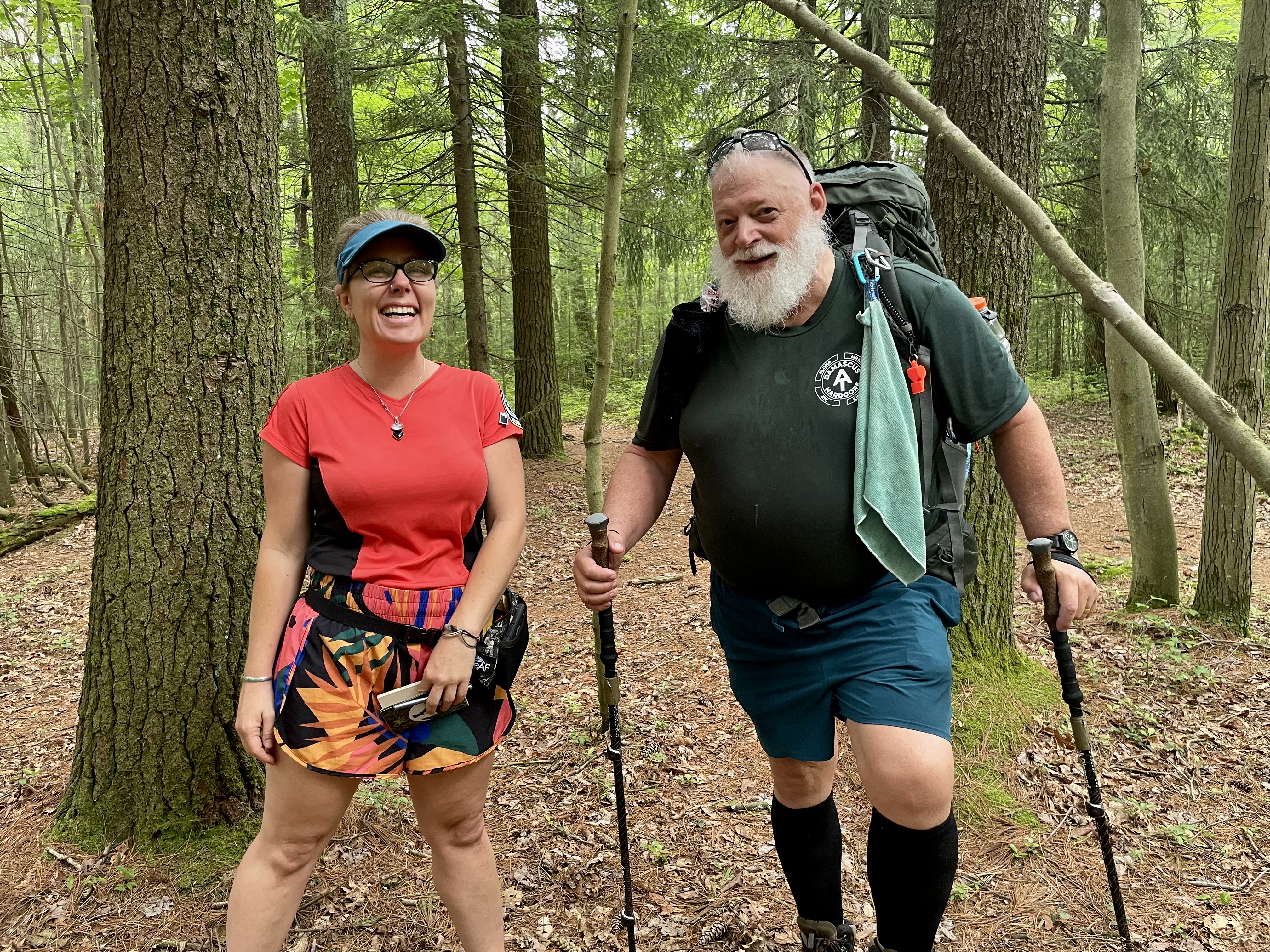 What luck to run into Dr. Ken “Nimbus” Bunning, former ALDHA (Appalachian Long Distance Hikers Association) Coordinator, who was out for a few days.  Ken truly is one of the greats. 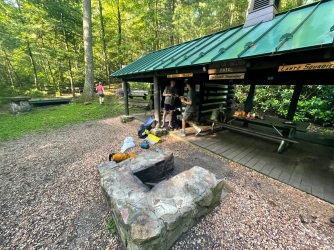 You may remember the smashed roof at the Quarry Heights Shelter from the previous blog two weeks ago.  It’s fixed thanks to the PATC North Chapter.

Quarry Heights may be the most intimate shelter space on the trail.  It’s enclosed by a grove of rhododendrons, features a porch swing, potted flowers, tent platforms and is always in mint condition.

Preparing to truck some trash down the mountain to the dumpster in New Caledonia State Park.

Sawing another small blowdown.  Sometimes you apply too much energy and bend your saw which then binds in the kerf.

The Mountain Laurel were peaking while the caterpillars are about to feast upon the oaks. 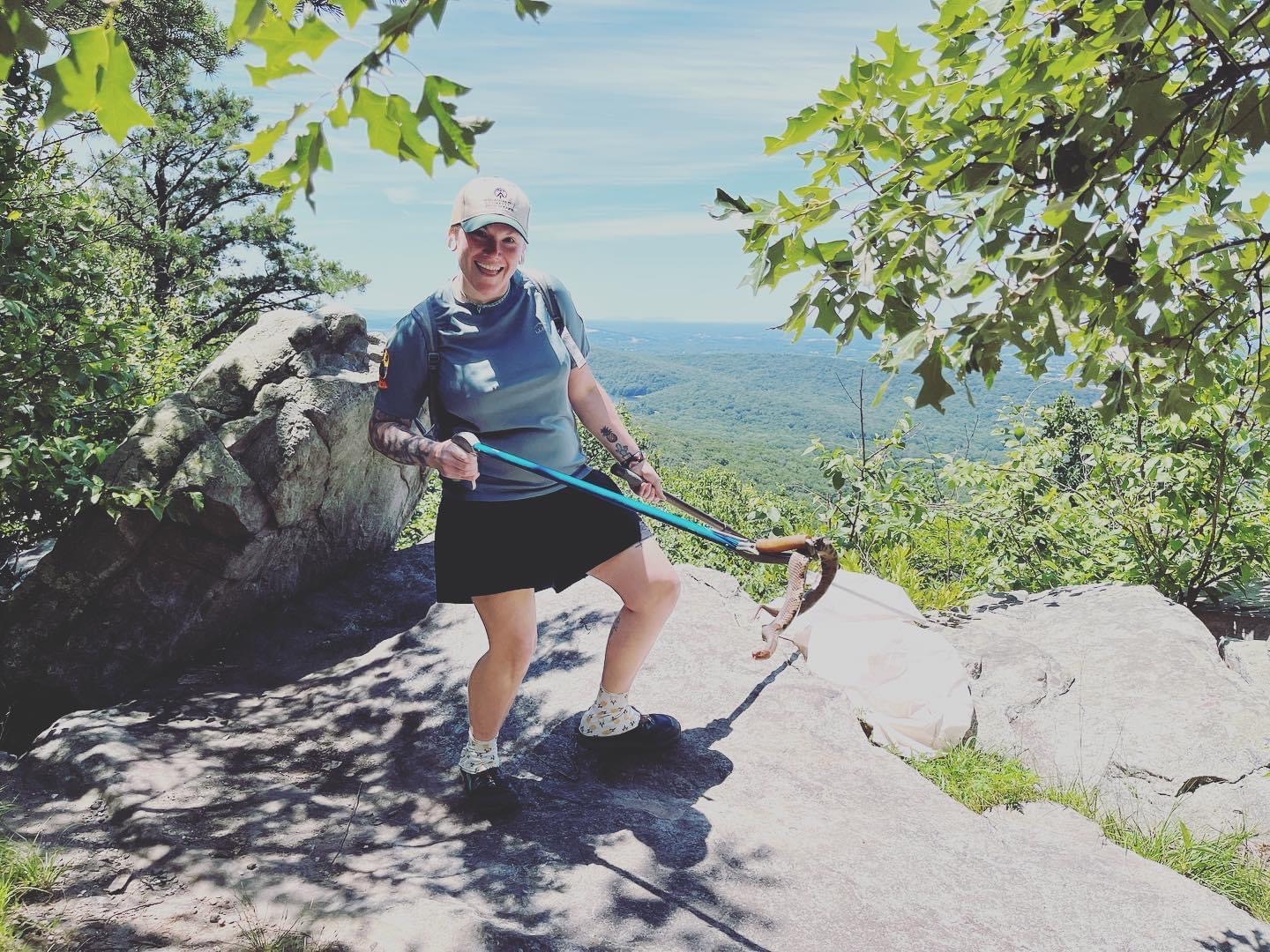 Meanwhile, a few miles north of us in Maryland, Kasey was wrangling copperheads to help them avoid unsuspecting hikers at a popular overlook.

Michaux State Forest, Pennsylvania, June 1 – 5 — Contrast is the name of the game.  This year the predicted rains never came.  Last year it never stopped raining.  This year the temperatures were in the low-80s.  Last year hypothermia lurked around every corner as the rain-soaked thermometer registered in the high 30s.   In both cases, the hikers were in good spirits, the rocks were happy, and so were we.

Ridgerunner recruiting this year has been a proverbial bear.  Qualified seasonal employees are in short supply.  Thanks to a stroke of luck, two ridgerunners will share the season in Michaux.  Chrissy has the first part.  Wendy has the second.  Chrissy will return to close out the season.

After meeting the the state forest rangers, we encountered our first blowdown almost straight out of the door. We quickly hacked a path through the branches leaving the bigger stuff for the chainsaw folks. 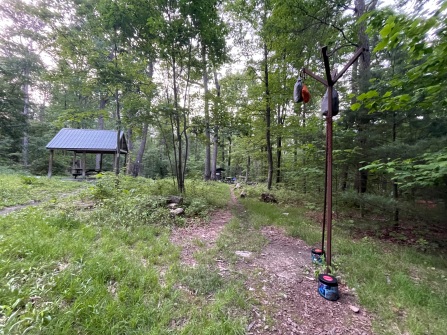 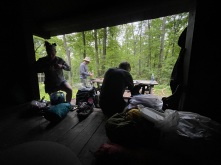 Our first night was spent at Tom’s Run Shelter.  The crowd was convivial.  We saw several people using bear canisters.  Everyone took advantage of the bear poles to protect their food.  Given the increasing number of bear incidents, this is an excellent sign.

With early morning temperatures in the low 60s, hot coffee is still a welcome treat.  That season is about to end as the summer heat and humidity sets in.

Our section of trail in Pennsylvania is only 37 miles long.  It packs some respectable hills, so it’s not a snap.

A line of thunderstorms was expected to pass about lunch time at Birch Run.  Several hikers ducked in for lunch and some decided to stay.  Fortunately the storms never materialized.  We pressed on for a total of 18 miles to Quarry Gap, probably the most famous and aesthetically pleasing shelter on the trail.  It is famous for its flowers and kitschy decorations. 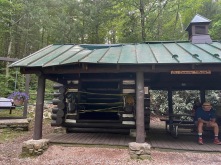 Sadly one of the twin shelters at Quarry Gap got bonked by a blowdown.  Most shelters are built like bunkers and can withstand a significant hit.  This was Wednesday. 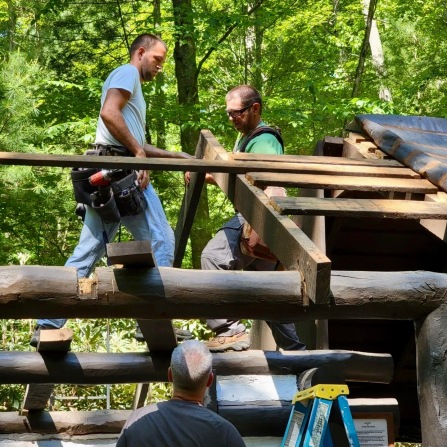 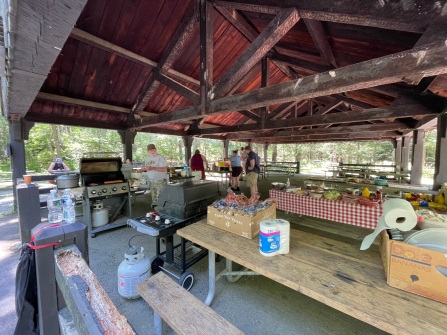 Meanwhile, other members of the north chapter were organizing at nearby New Caledonia State Park to prepare a trail magic feast featuring hamburgers, hot dogs, pasta salads desserts, and soft drinks!  After the work day, the crews descended to polish off the fixin’s. 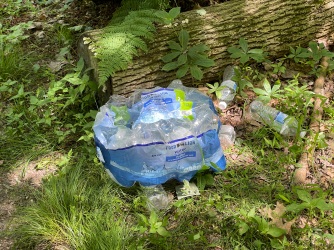 Ours wasn’t the only trail magic.  A well-intended generous soul left water near a road junction.  We left it overnight, but cleaned it up on our way back to New Caledonia.  Trail magic should not be left unattended, even if it is water which, unlike food and sugary drinks, does not attract animals. 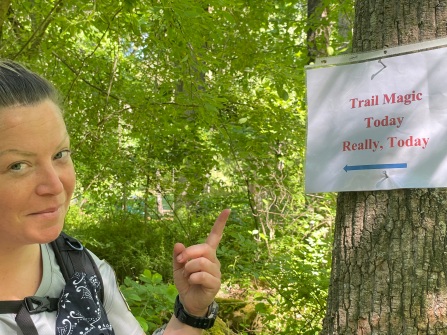 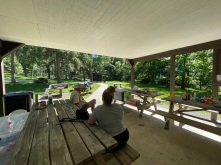 A hiker’s favorite sign.  This is trail magic done the right way.  This guy comes out several times a year to cook hot dogs and serve snacks at the Old Forge picnic area.  He retrieves his signs when the day is done.  I loved his dogs last year and my dreams were fulfilled that he’d be there again this year.  Before we left, the pavilion was full of hikers. 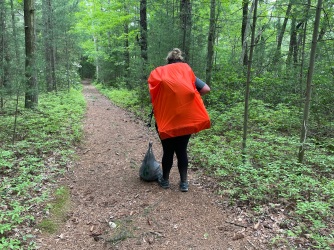 Our chunk of Pennsylvania has its scenery.  Eponymously named Rocky Mountain is our signature site.  In other places pine needles carpet the straightaways. 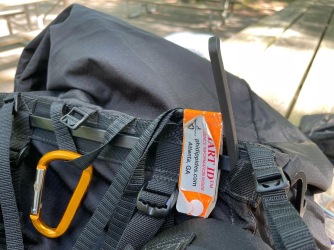 Houston, we have a malfunction.  I’m still adjusting to switching to ultralight equipment.  This Zpacks frame has had its issues.  One reason the gear is lighter in weight is that it simply is not as rugged as the heavier traditional equipment.  In this case, the design is flawed.  Now both sides have been repaired with zip ties. 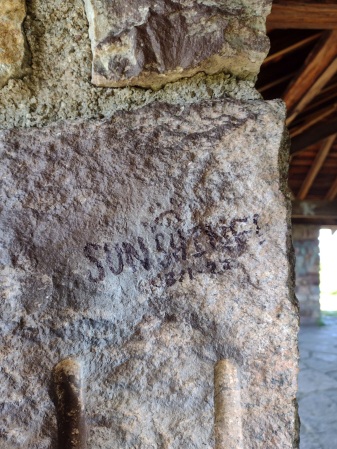 Graffiti continues to be a problem, although not nearly as bad as it was last year.  “Sunshine” seems to be this year’s problem child.  The first instance is in PA.  The second is in NJ.  We’re looking for you girl. “Pyro” last year’s biggest jerk has been painted over everywhere except in this one spot where someone seems to have had a sense of humor and maybe is trying to message others. 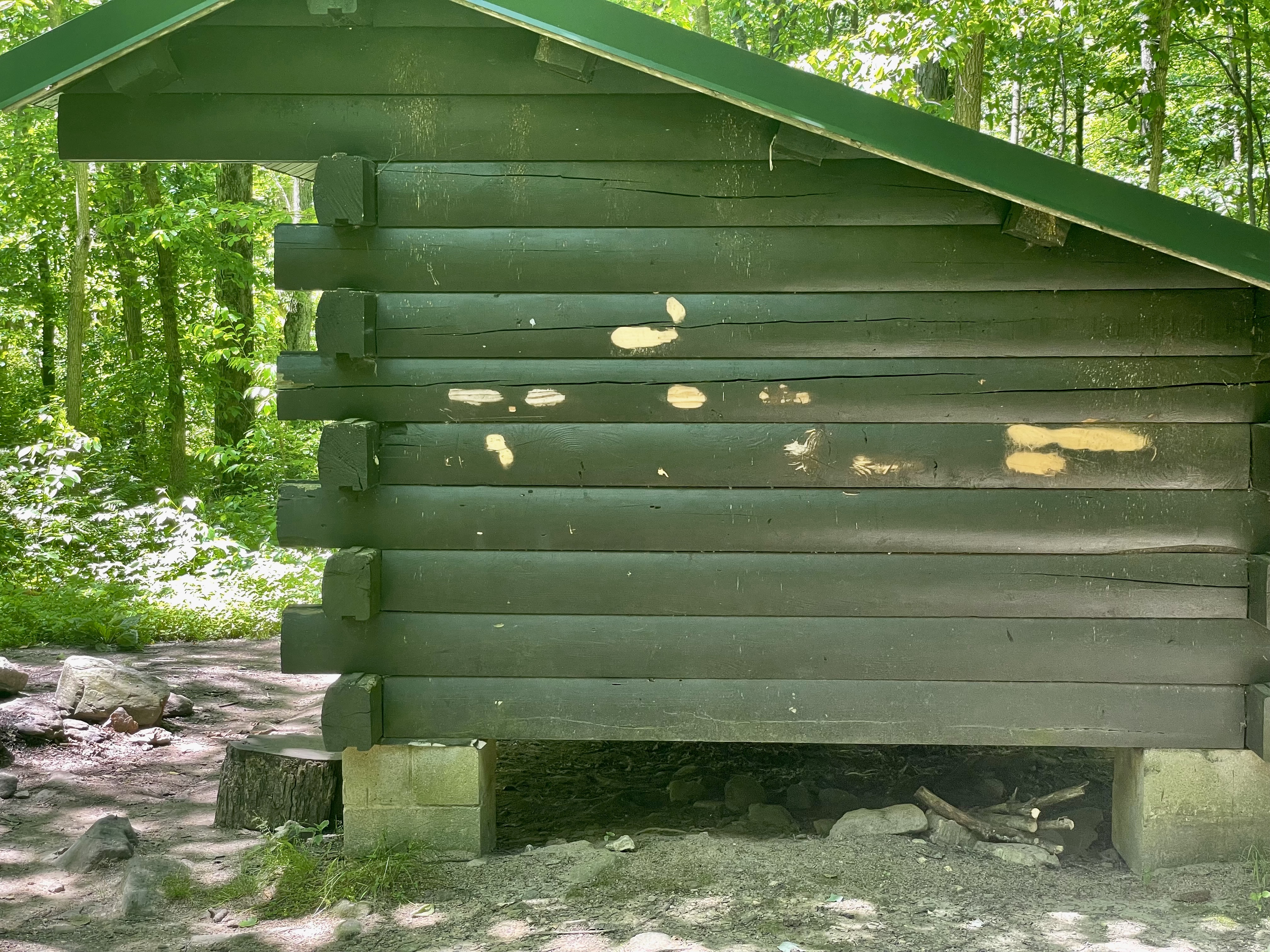 Literally rubbing out graffiti can be a sport.

The patrol ended with the last piece of microtrash at Penn-Mar, aka the Mason-Dixon line.