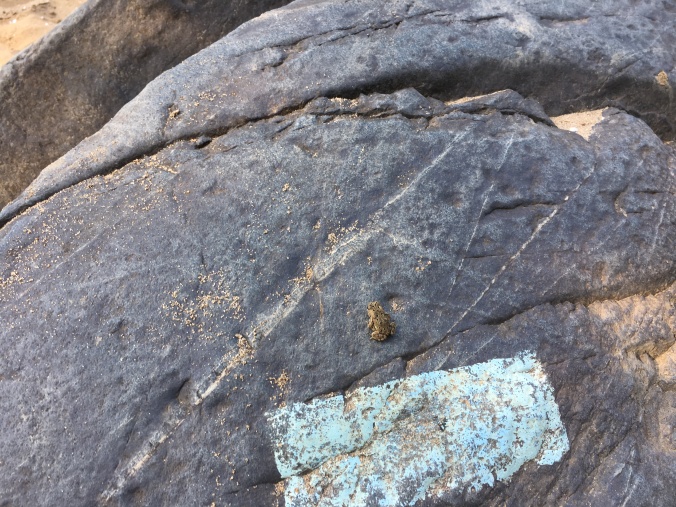 Tiny toad next to a blue blaze. 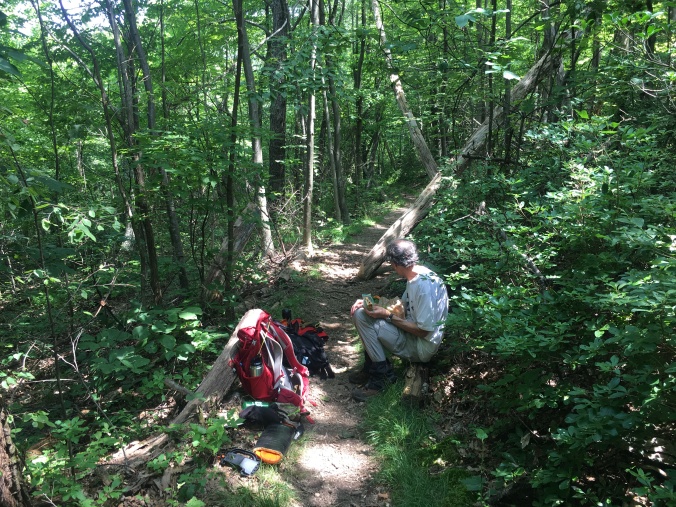 We cleared the leaner with a 24 inch pruning saw.  The chainsaw vapor locked. 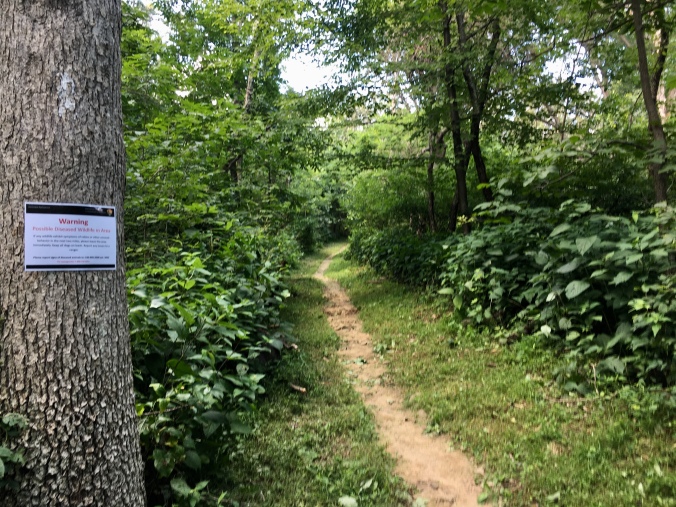 Monday the heat broke and I dashed up to the park to weed the AT section I maintain.

The warning sign is about a rabid ground hog that has been spotted in the area.  Of course I immediately imagined that our local bear would find and eat the dead ground hog, then we’d have a rabid bear on our hands … Nooooooo!  With that I put my imagination back in its box and got to work.

Tuesday featured a Maryland AT Management Committee meeting where the various organization involved with the AT in Maryland convene to sort out issues and coordinate activities.

Traffic is always horrific coming out of Washington so I usually leave early and meet the ridgerunner for dinner.  Then we attend the meeting. 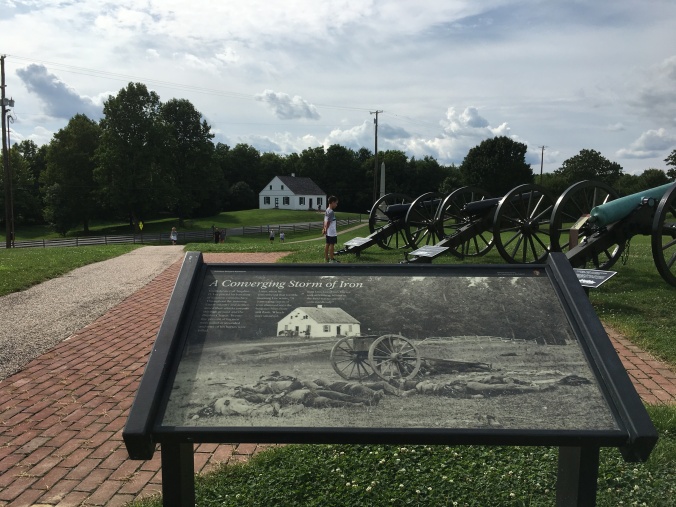 Dunkard Church taken from near this vista.  It is one of the iconic photos from the battle.

I had 90 minutes before the time I arranged to meet Mary, so I dropped in on Antietam National Battlefield near Sharpsburg, MD.  Link to Antietam Battlefield website

When I was a student at the Army War College in Carlisle, Pennsylvania, we spent some time studying this battle to learn what we could from the decisions its various leaders made on that bloodiest day in American military history.

“23,000 soldiers were killed, wounded or missing after twelve hours of savage combat on September 17, 1862. The Battle of Antietam ended the Confederate Army of Northern Virginia’s first invasion into the North and led Abraham Lincoln to issue the preliminary Emancipation Proclamation,” according to the website. 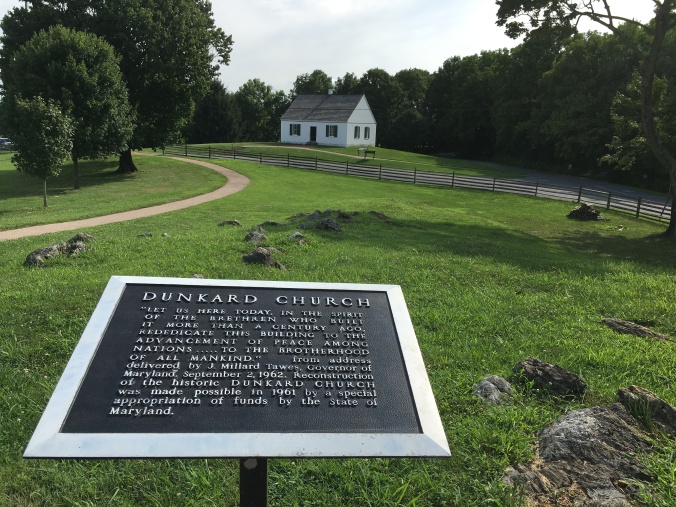 After falling into disrepair, the church was rebuilt for the civil war centennial. 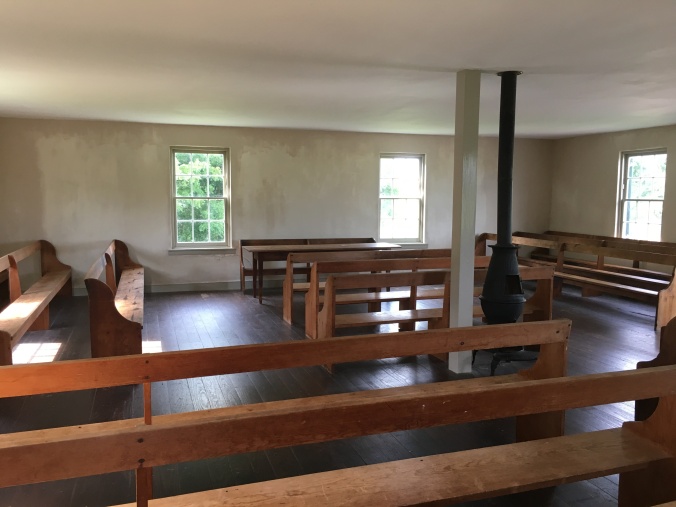 Inside of the church as it is today.

The Dunkard faith tradition is alive today.  Link to the Dunkard Brethern website.

Now for the highlight of the week.  It’s time for another Gang of Four (again minus one) hike.  Alexis was booked as an analyst on NPR’s 1-A Friday domestic news round up. 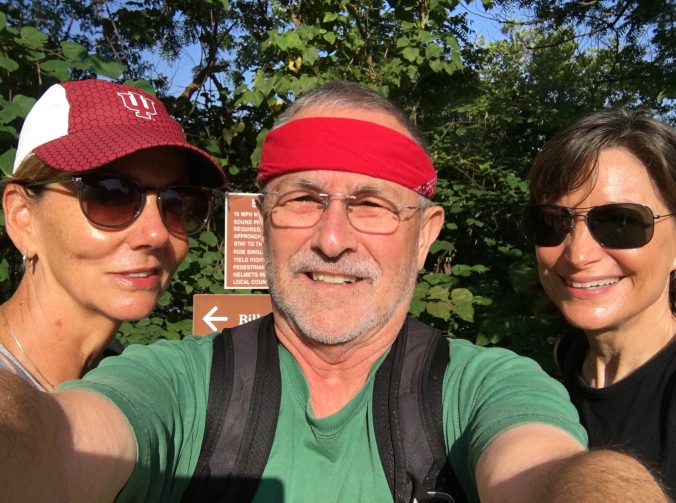 We were back at the C&O Canal’s great falls.  There are many trails in the park, but the Billy Goat trails are the best.  Last time we hiked Billy Goat B because A was flood damaged.  Yesterday A was open and we were ready.  Link to our last visit. 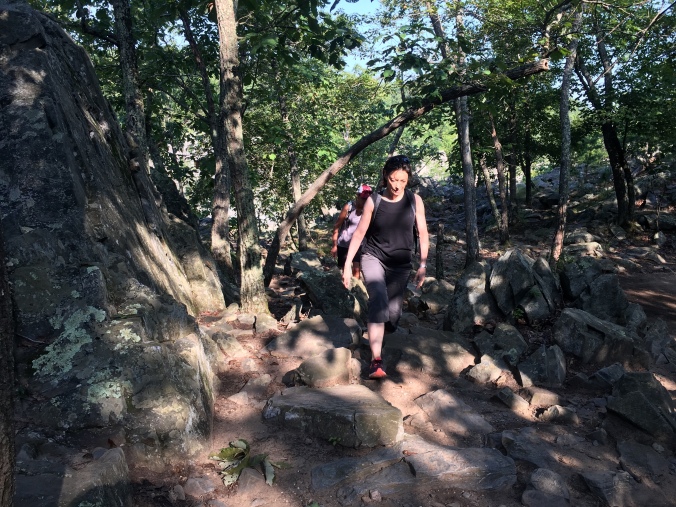 Billy Goat A is similar to B.  It’s located on the Potomac floodplain and features rocks and sand. 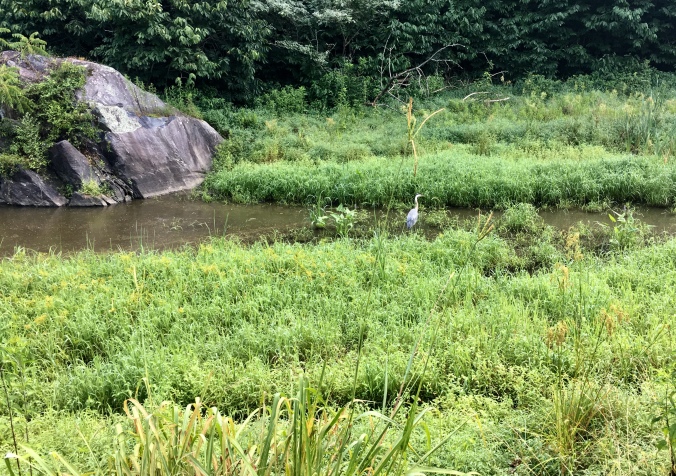 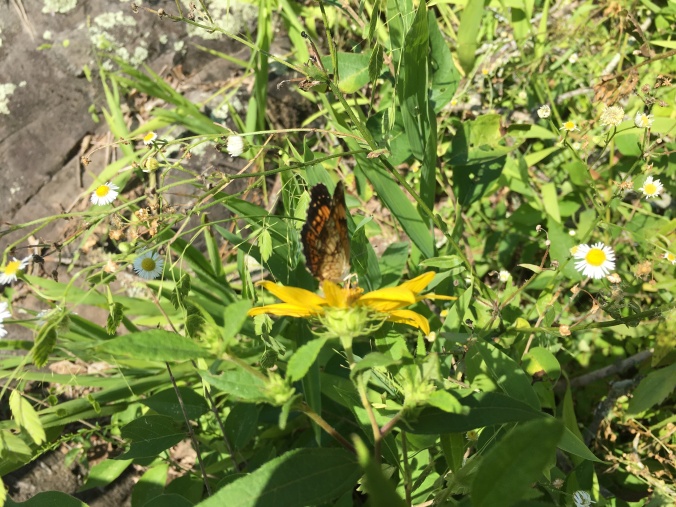 Butterflies were abundant.  This is Viceroy, not a Monarch. 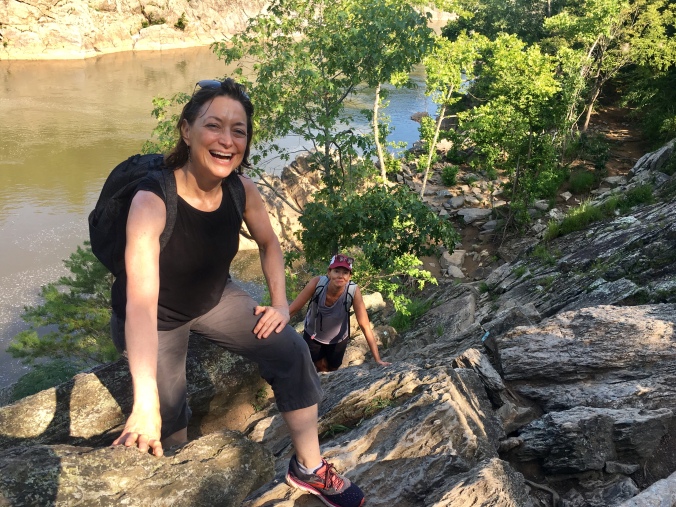 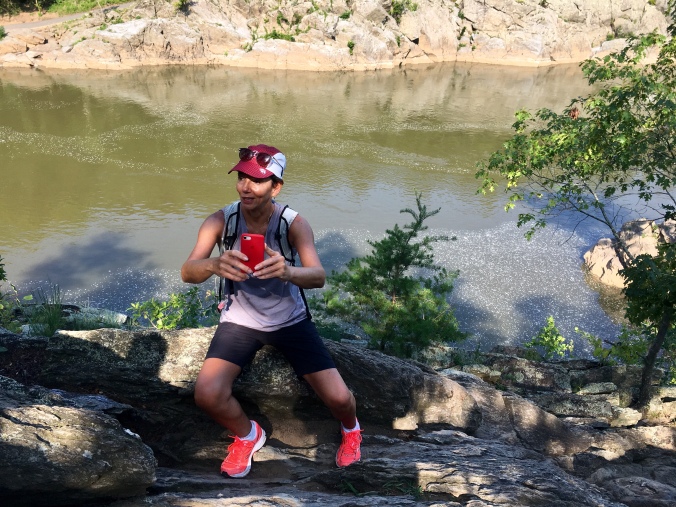 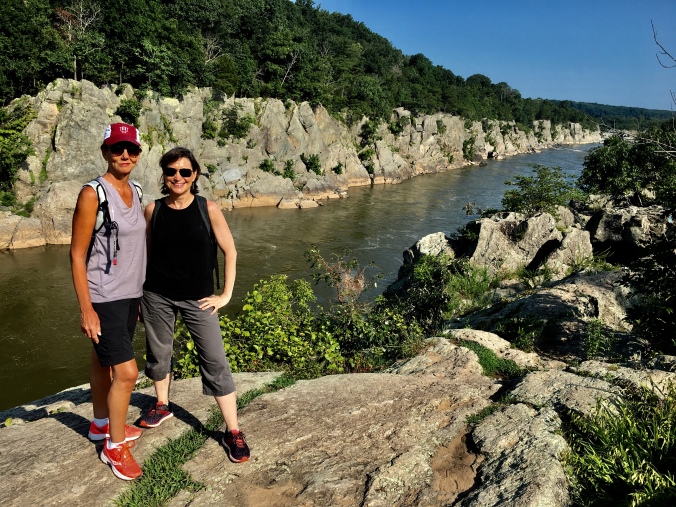 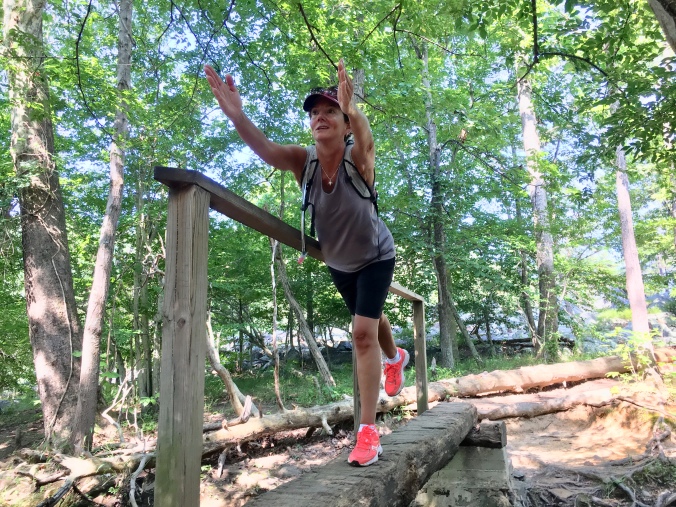 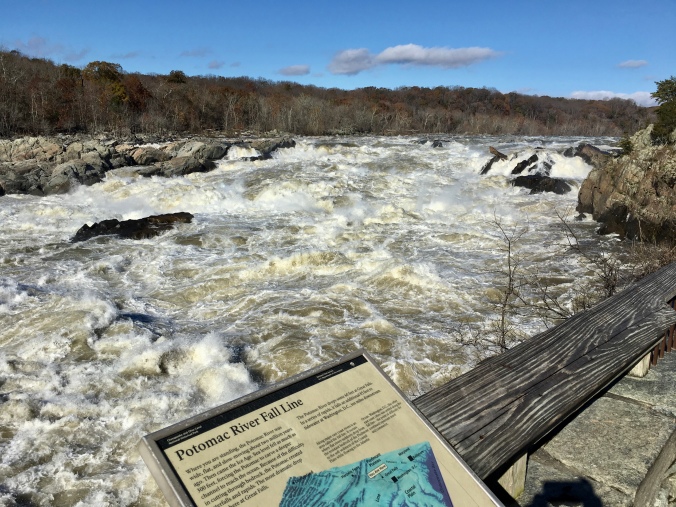 Readers may recall last year.  Area rainfall for the year was nearly double normal.  The river roared through Great Falls as if wasn’t even there. 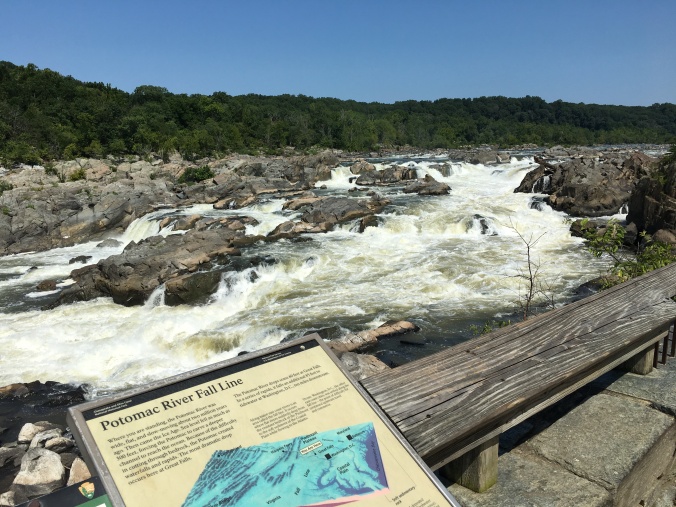 What a difference a year with normal rainfall makes! 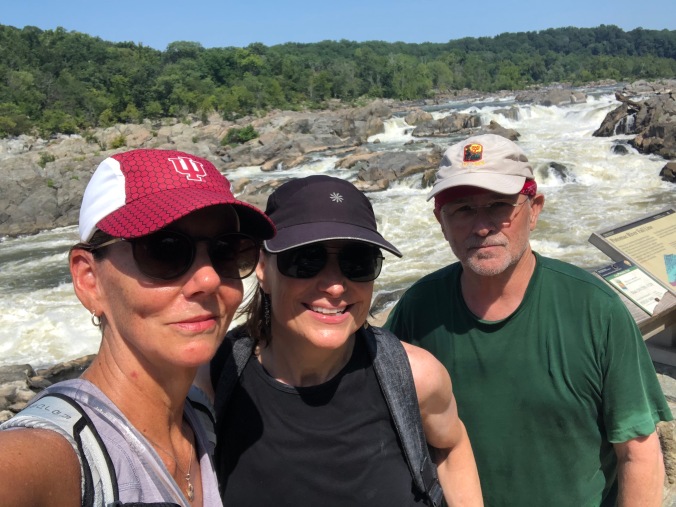 With that, we called it a day and repaired to a local watering hole for an al fresco lunch.  We had to sit outside.  I forgot to bring a dry shirt.  Stay tuned for our August adventure.