Shenandoah National Park, October 21 – 22, 2022 — The park is probably getting tired of me.  I’ve been there six of the last nine days. I won’t mention the gas bill.

First the hike.  We were back at it again last Friday when the Gang of Four -1 plus Sara hiked up North Marshall and down Big Devils Stairs on a leaf peeping sojourn.  We were not disappointed. 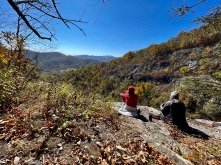 We ended with our usual pizza stop at the ever excellent Rappahannock Pizza Kitchen – a brick oven pizza emporium in Sperryville. https://www.rappahannockpizzakitchen.com/

Now for the weekend highlight.  Gravel Spring Hut is a place for hikers to sleep.  As it’s name implies, it’s adjacent to a spring and comes with campsites and a composting privy we’ve chronicled before. 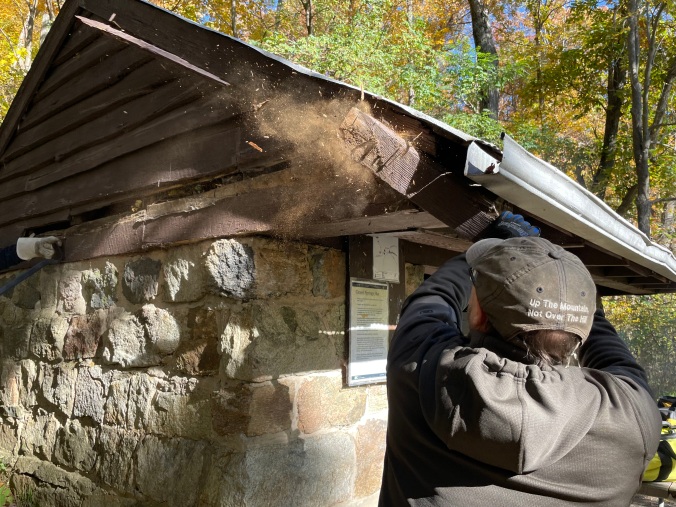 The hut’s siding is original inch-thick oak carpentered by the CCC nearly 90 years ago.  After all that time, it’s beginning to rot in places due to insect and water damage.  In order to save as much history as possible, only the rotted parts of the boards are replaced with rough sawn lumber matching the same dimensions. 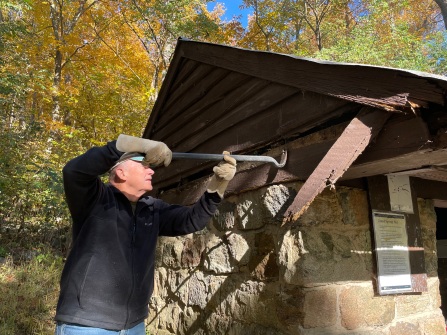 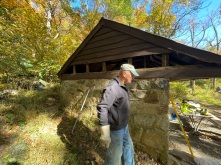 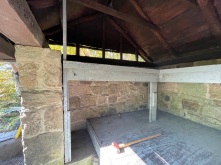 Boards are surgically removed rather than the chaotic demo seen on TV home renovation shows.

The scrap was left as a treat for campers to burn.  The volume of activity near the huts ensures there isn’t much small firewood around to collect.  Since most campers don’t carry small saws, they get stuck trying to burn larger branches that don’t readily lend themselves to campfire fuel.

Next, the boards are cut and sized.  Thank heaven for battery-powered tools.  Sara, aka Ridgerunner 2, stopped in to lend a hand. She’s given a lot to the park the past two years and PATC in 2016.  This year she also was a ridgerunner in Northern Virginia and Maryland.  We’re going to miss her.

The boards are carefully placed and screwed into place.  Screws eliminate the risk of further damage pounding nails might cause. 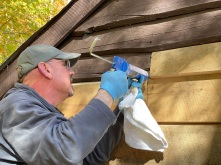 Special caulk is stuffed into the cracks followed by paint.  Russell Riggs, the hut maintainer, played Rembrandt.  The hut is back in service.  We’ll be back again when we have more lumber which is donated by a local saw mill.