My view of the Thornton Gap Entry Station

Shenandoah National Park, July 24 – 27 — The North District Crew Week was anything but usual.  For one, we tackled a variety of projects.  For another, I only worked three of the five days.  Now, it’s off to Manitoba to fish with my brother and nephews.

Usually crew week offers the opportunity to partner with the park service trail crews on big projects that are too big for either outfit alone.  This year everybody was everywhere all the time.

We started with the great blowdown hunt.  While the remainder of the group took on some dirt work, Wayne Limberg and I searched for a tree tangle reported by a hiker on the Shenandoah Hikers Facebook page.  Shall we say it wasn’t where it was alleged to be…

On net we hiked about four miles on our search.  We found it about 200 yards from a trailhead parking lot.  It would have been a cinch if we had started three miles south of the initial reported position. 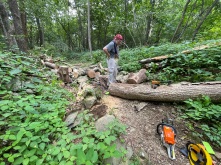 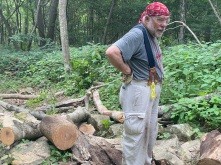 We managed to chew a lot of wood into sawdust, huge piles of it.

In the end, the old guys were bushed. 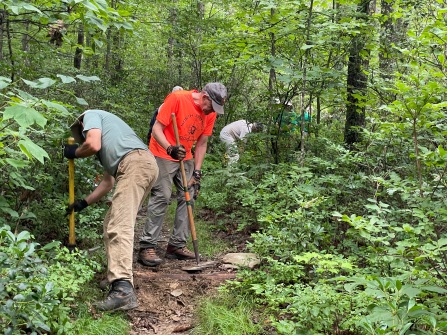 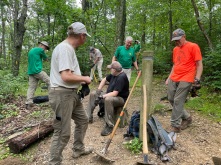 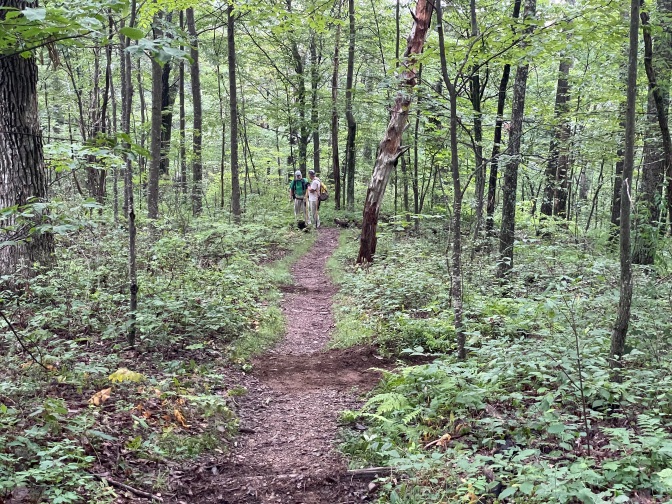 The next day we rehabbed the AT from trailhead parking south to the Byrd’s Nest 4 connector trail.

My last day was best.  A tree on the AT about 200 yards south of Compton Gap parking became a leaner last year and ended up in a near vertical posture.  This was too dangerous for volunteers to cut.  After consultation we and the park crew agreed that it should be pulled down.  This is how it happened. 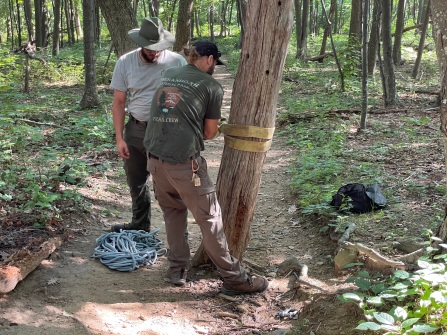 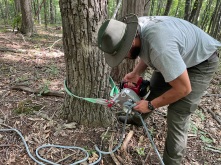 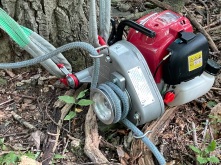 Dave Jenkins has a new toy.  It’s a motorized winch.  Beats a grip hoist any day.  But, sometimes things don’t exactly go according to plan.

Oh oh!  Nothing is happening.

Ain’t technology great!  What else.  Check You Tube to find out what you did wrong.

Turns out the rope wasn’t wrapped quite the right way around the capstan.  A couple of twists made all the difference.

The tree had dug itself in.  Nothing a pick mattock could not tackle.

All that for 50 seconds of sawing. 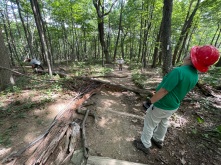 Caroline is a beast!

Shenandoah National Park, March 19, 2022 — The daffodils are up and so is the Hoodlums trail crew.  Yesterday 26 Hoodlums gathered in three different places to begin spring cleaning on the north district’s hiking trails.

The three groups gathered at the North Marshall trail head, Piney Ridge and the Pass Mountain blue blaze trail.  My assignment was to report to North Marshall where Caroline and I won the bonus prize of breaking big rocks into little ones with sledgehammers!

Ultimately fate spared us and our mission changed.  We were dispatched on a blowdown search and destroy mission.  So, that’s the story we can tell. 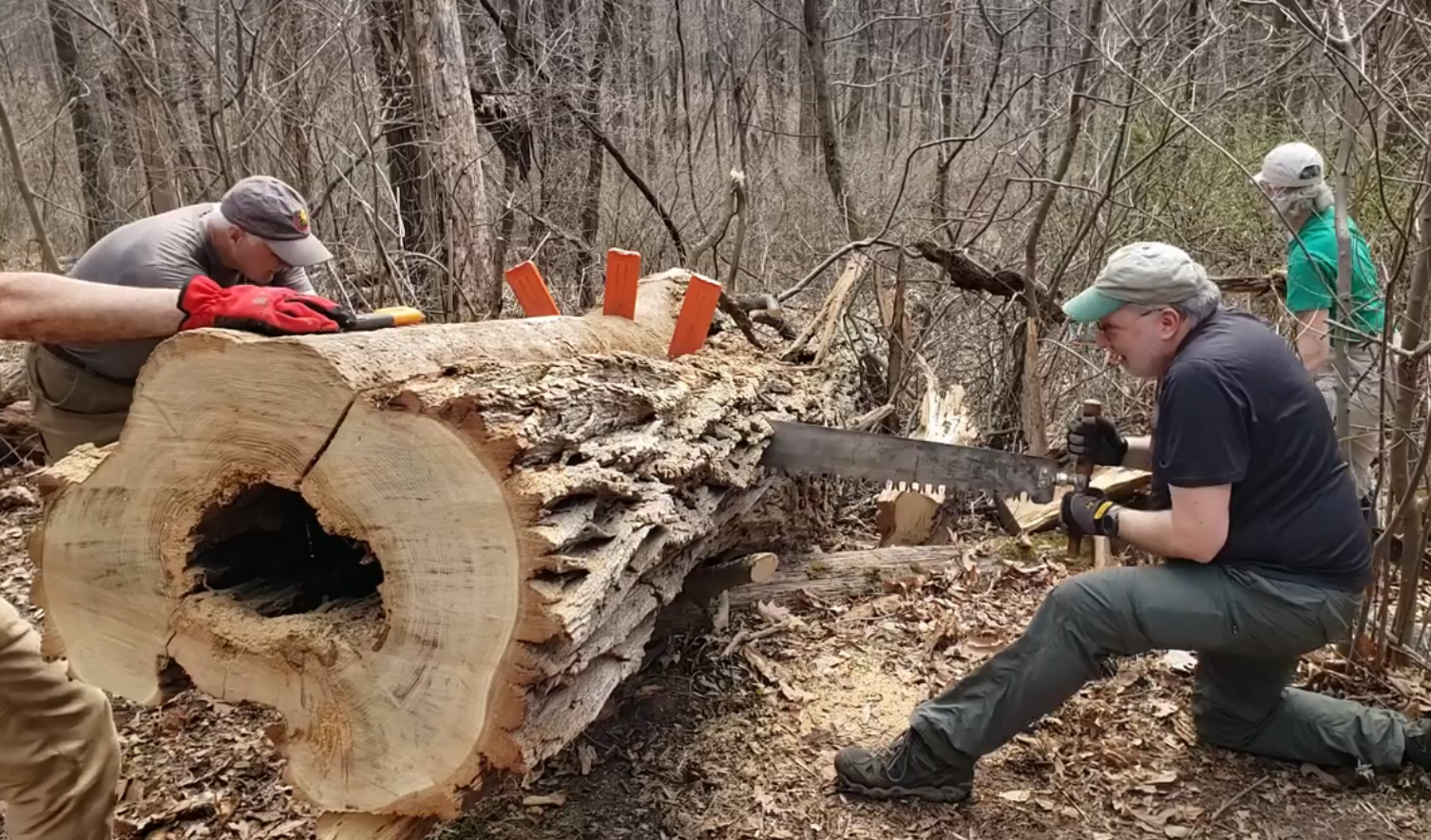 While everyone else was “working,” Caroline and I were eating blowdowns for lunch with my Stihl MS 261 with a 20″ bar.  That’s the military equivalent of an 8 inch howitzer.

Our itinerary included a big honker on the Gravel Spring hut blue blaze access trail, a smaller one on the AT near the Keyser Run parking access trail and several near Beahms Gap and Neighbor Mountain.  We left for our first objective at 0920. 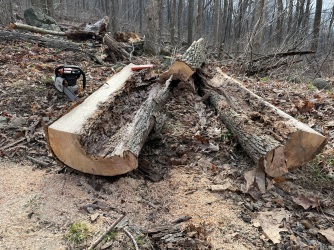 A hiker told us the blowdown at Gravel was near the bottom so we used the fire road to get closer.  Oops.  Not so fast.  The tree broke apart after we sawed it.  Made it easier to move for sure. 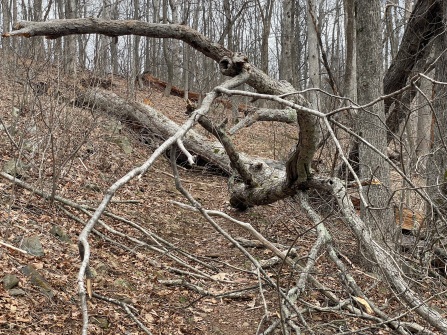 The tree we were after was a hundred yards up hill from the hut.  The double trunk and the slope made bucking this one a little more challenging than normal.  The base was about 20″, making the salami slices large and heavy.  Caution required.

We’re not fake news.  Not every chunk we moved went as smoothly as the one at the top of this page.

In this case, Caroline is the “swamper” or sawyer’s helper.  Her job is to caddy the saw, and help remove the debris. 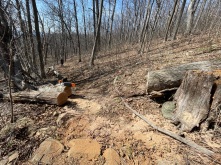 Ultimately the path was cleared.  The two blowdowns near Gravel Spring consumed nearly an entire tank of gas.  In comparison, I can usually saw for an entire day on a single tank.  We finished at 1140 and drove to Keyser Run parking for lunch. 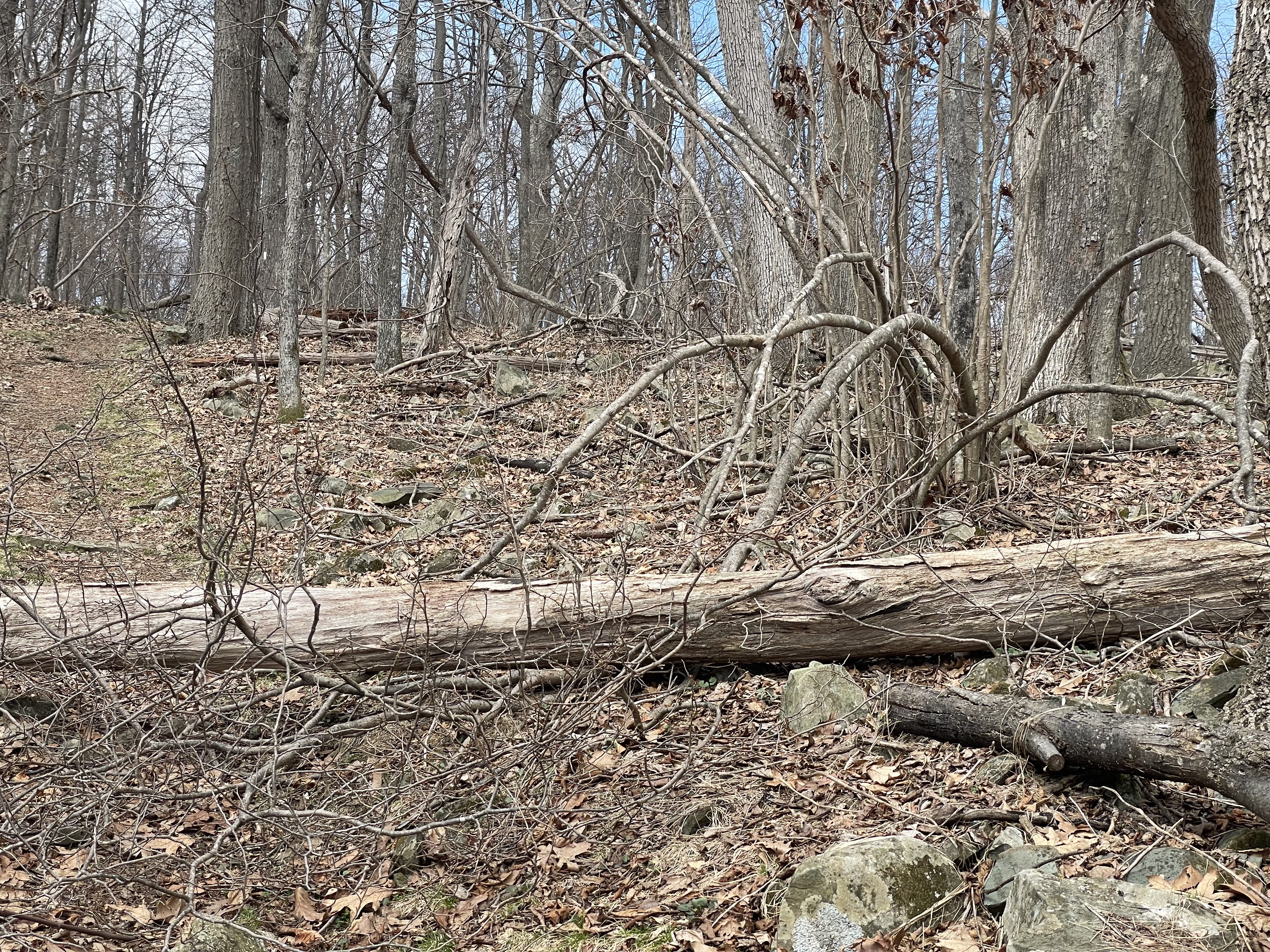 Our next objective seemed fairly simple, but it wasn’t.  The fall created several spring poles,  live trees bent over and held down.  Spring poles can be very dangerous.  The amount of energy stored in any one of them can be shocking.  Don’t let the size of these saplings fool you.

Caroline checks out one of the spring poles.  She was surprised at how much energy was released when I demonstrated an improper cut on one of the tiny ones. 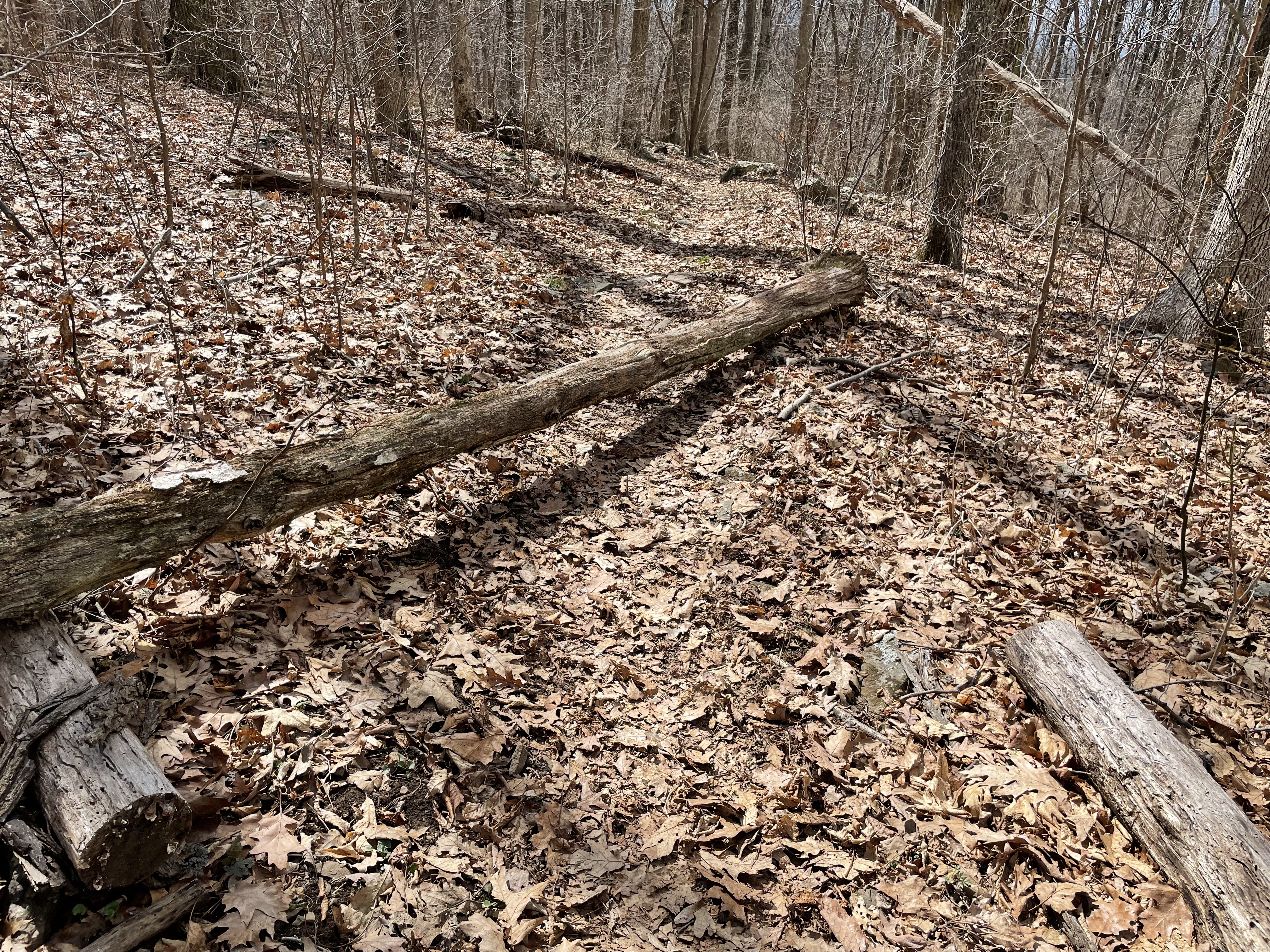 The first blowdown at Beahms Gap.  It was a single cut.  The rest were similar.  Nothing found on the hike over Neighbor Mountain.  Time out:  1530.

Fortunately or unfortunately, Mother Nature never seems to run out of blowdowns.  That said, Caroline was disappointed that she didn’t get to bust rocks.  Maybe next time…

Shenandoah National Park, November 29 – December 2, 2021 — Once upon a time the kid thought he knew a fair amount about chainsawing – not everything, but enough.  After all, he’d owned one for 30 years and first used one about age 16.  Then I took my first sawyer certification course from the National Park Service in 2015.  It was a major wake up that hit me up side the head like a beaned baseball batter.

I realized that I knew nothing compared to what I needed to know; sawing small bore firewood is nothing compared to bucking huge oaks and tulip poplars; professional chainsaws are bigger and badder than the backyard models I’d been using.  So began a steep learning curve seasoned with a lot of caution. 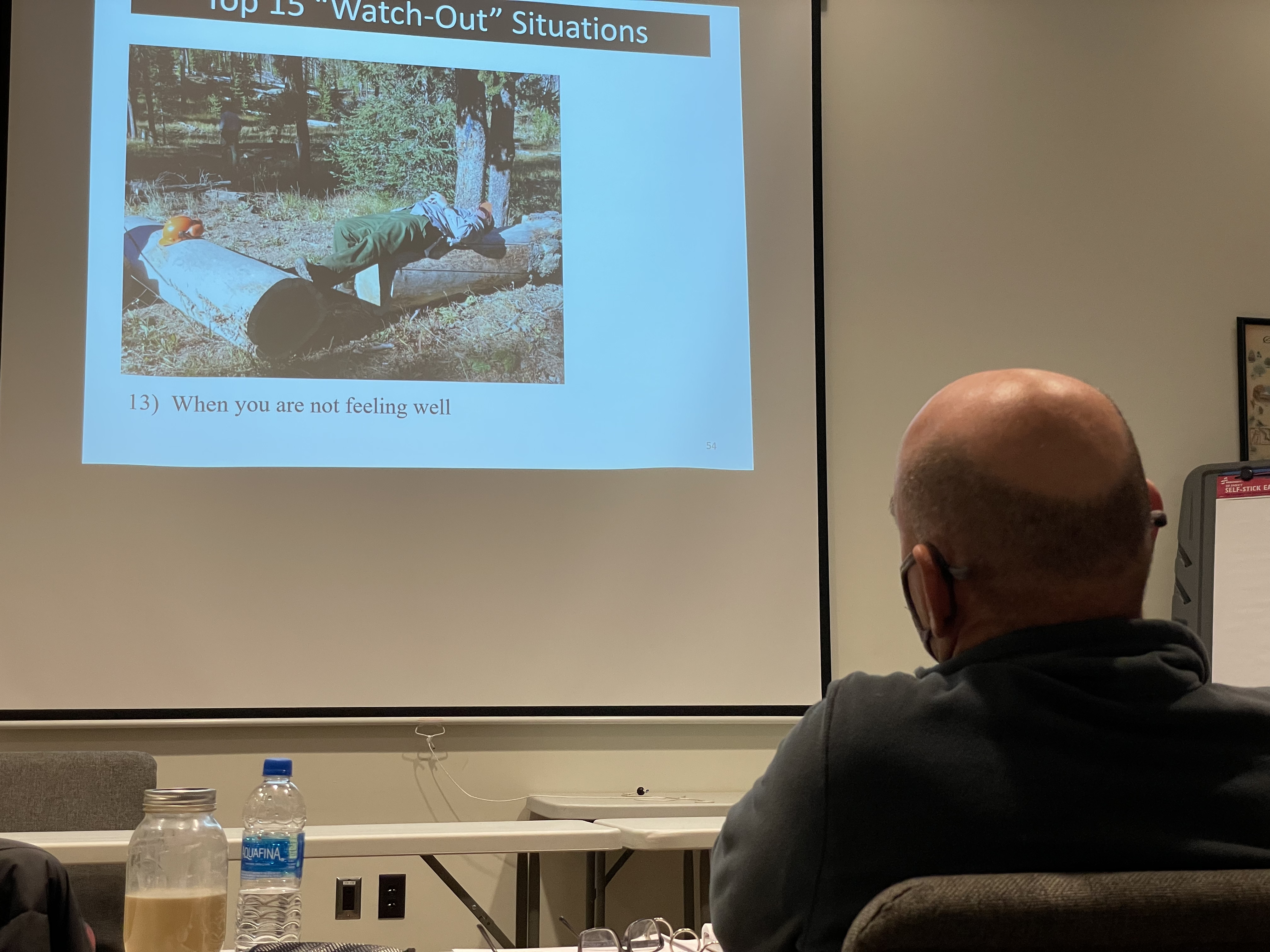 Previously chainsaw training for volunteers took place over a weekend with some homework done prior to class.  After some lecture and passing the written test, a practical exam followed in the field where students demonstrated the required competency to be certified.

For decades there has been a tug of war on chainsaw certification between the U.S. Forest Service (Department of Agriculture) and the National Park Service (Department of the Interior).  It’s my guess that the NPS moved toward the USFS judging that chainsaw training is now 40 hours and far more comprehensive.  Now we receive the exact same comprehensive training park service employees get.

Ya gotta love COVID, grrrr.  The masks weren’t really that much of an inconvenience.

The course did cover some things we, especially the volunteers, didn’t need to know.  When learning to sharpen chains, I noted that if my chain got dull, I’d simply change it and take it to the shop when I got home.  I have six, in part because I don’t have the patience to sharpen them. 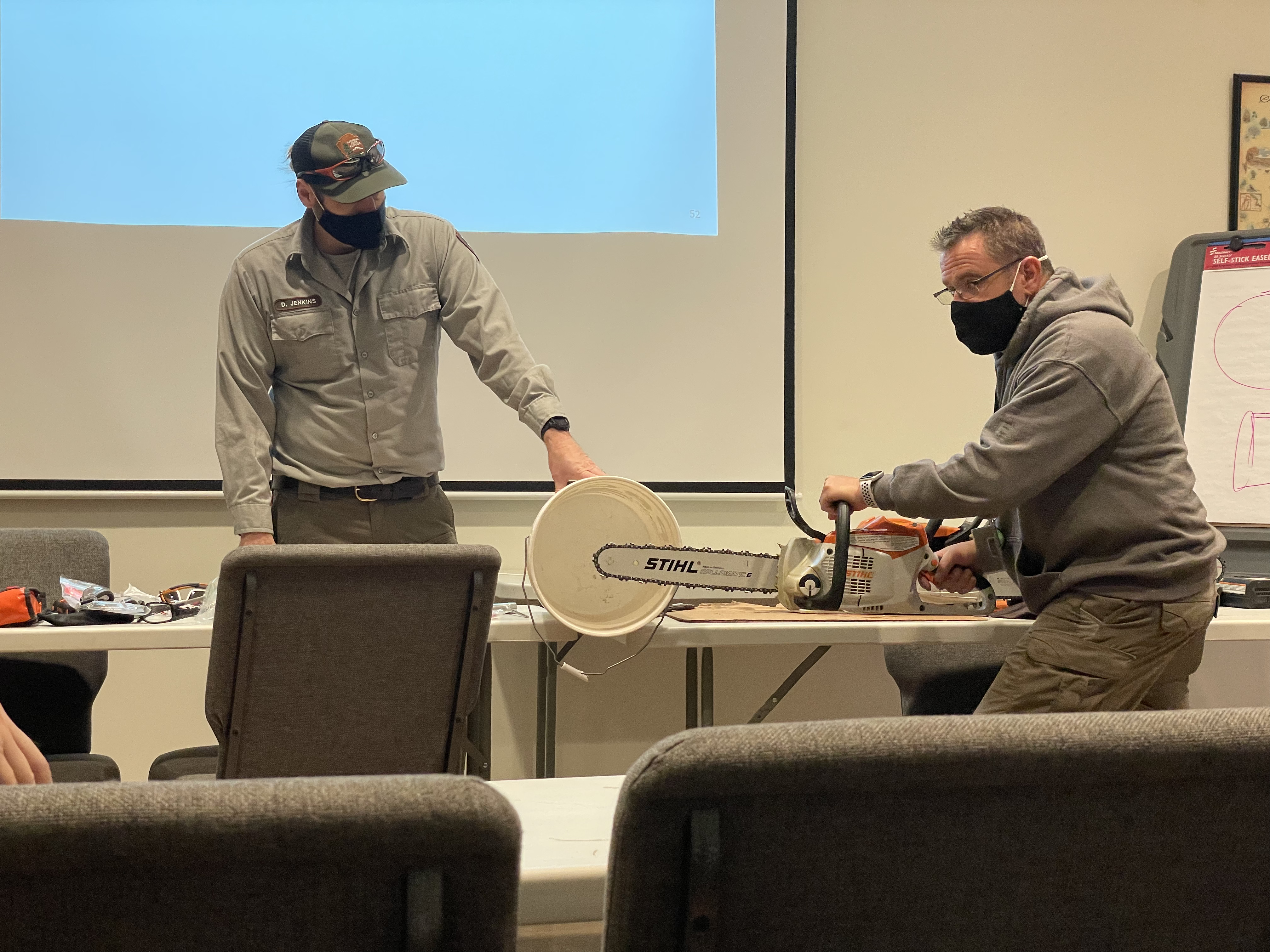 Chainsaw accidents happen in a flash and they’re ugly.  We’ve always been drilled on safety, but this course went into a lot more depth.  For someone with several years experience, I learned more about safety and accidents than I knew before the course.

Safety is a big damn deal as it should be.  Rule one:  If you are uncomfortable with your assignment, decline.  No one will fault you for doing so. 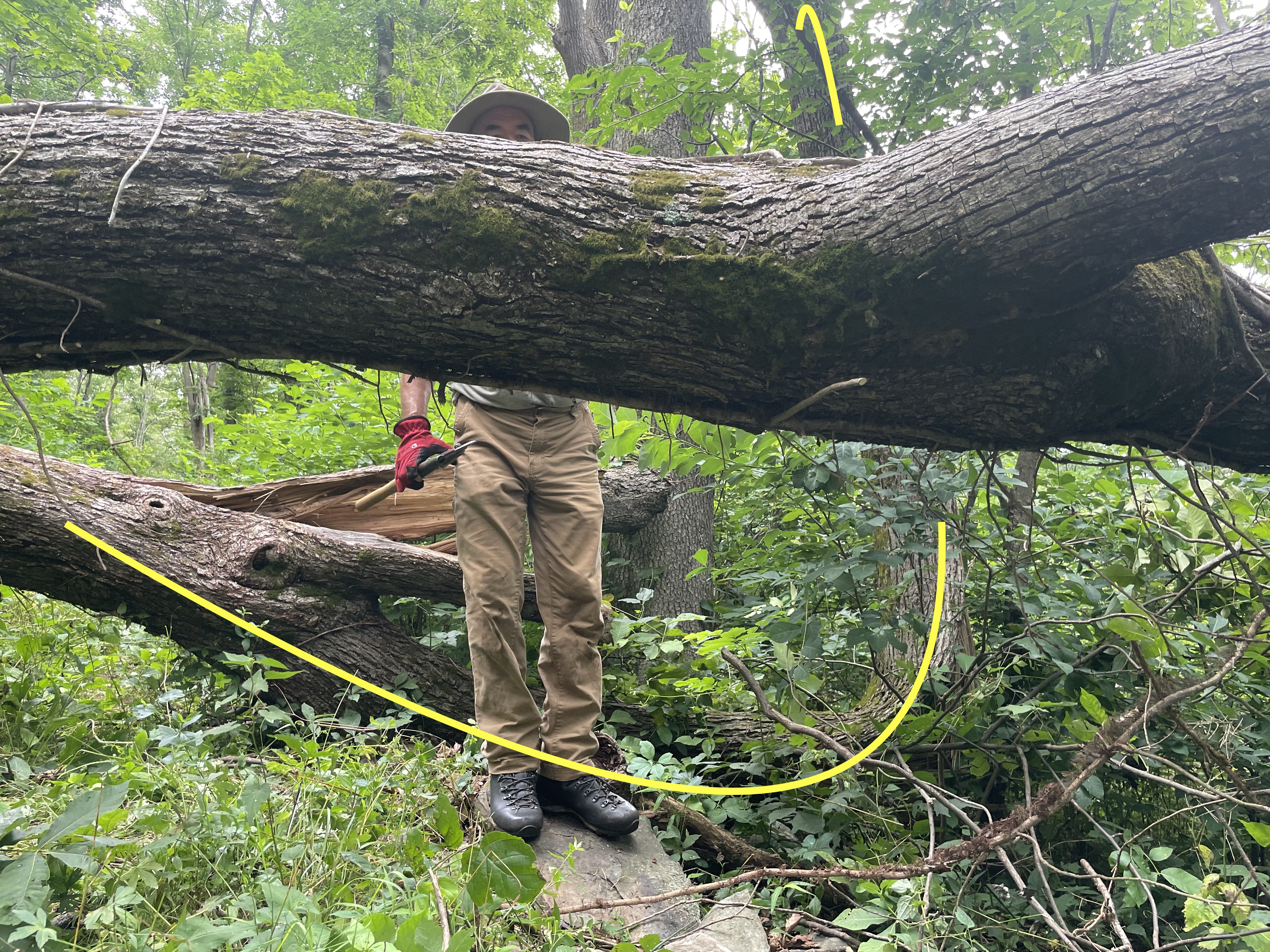 I passed on one this summer and the park service crew did too.  Too hairy.  It’s in a wilderness area where it’s well within policy to leave it.

The course reminded me a lot of military training where everyone starts at square one and demonstrates competency at each step of the way.  Here is square one:  Safely starting your saw.  There are wrong ways that are very unsafe.

Steph has an electric chainsaw and used a standing start. Dan is using my saw which was already warm.  He used a ground start.

Steph was in my last recertification class and allowed me to borrow her saw for my competency demonstration.  They are very cool featuring less pollution, noise, and maintenance.  Their power is good and battery life ok.  I’d eventually like to get one, but would probably buy three batteries.  Of course, electric chainsaws are like printers.  The saw costs far less than the batteries.

We practiced making sawdust and demonstrating the cuts we’d have to make.  Everyone passed. 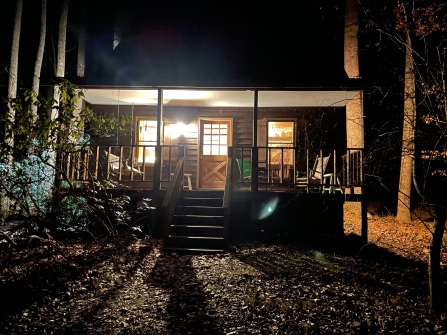 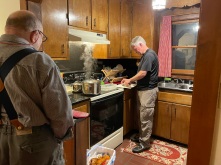 We stayed in PATC’s Huntley cabin, just outside the park.  It’s a fully modern and well designed building with a NYC apartment-size kitchen.  The three of us there took turns making dinner.  Let’s say everybody got a go on that assignment.  I made prosciutto, green apple and Gorgonzola pizza.

We woke up to a light dusting one morning. 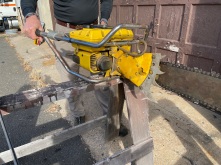 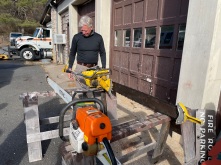 The capper was a display of some vintage and very ginormous chainsaws.  No chainsaw envy here. 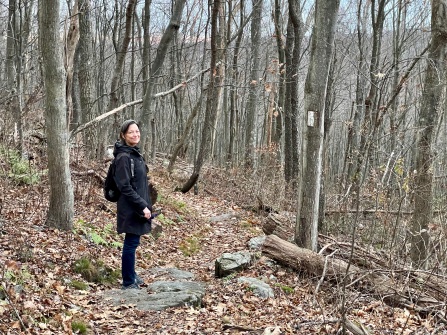 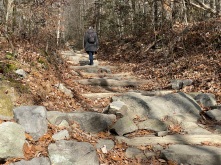 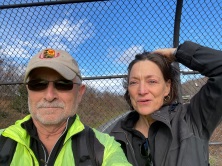 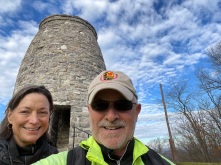 The next day Gang of Four member Catherine “Badass” Berger and I pounded out the final 12 miles she need to complete the AT in Maryland and earn her Maryland end to end patch.   We found some work for the Maryland sawyers along the way.