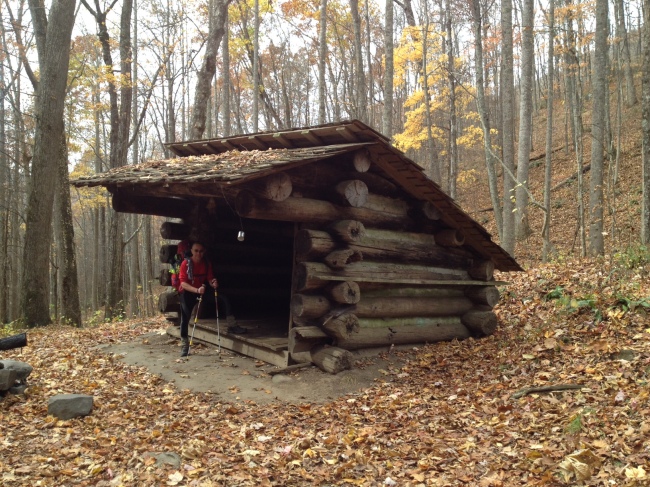 When you’re hiking day in and day out, your mind sometimes drifts to the whimsical.  Other times it’s strictly focused on not tripping, the next drinkable water or whether or not you can make the next shelter before dark.  Unfortunately, there’s much more of the later.

Along the way, I had an idea.  Water weighs a pound per pint. In round numbers, that means two liters weigh slightly more than four lbs.  That’s a lot.  Fortunately, I learned to carry only a single liter when I got word that the water was good up ahead.

Still, I have a challenge for all my scientist friends at Georgia Tech.  What you geniuses need to invent is dehydrated water.  You know, open the bottle and just add air.  Air has the essential ingredients –  hydrogen and oxygen.  Certainly, someone could figure it out.  Sure would help a bunch of tired hikers!  Every hiker to whom I mentioned was certain that the scientist who invents dehydrated water would be canonized for sainthood!!!

As for the rest of the gizmos and gadgets, there’s good news and bad.  First, I used everything I brought in my pack from sewing kit to the Kindle.  Obviously, not everything in the first aid kit was used, but parts of it were.  The Kindle didn’t get used enough, so it’s stays home, as much because of the cold weather’s effect on batteries as anything else.

Lithium batteries are terrible in cold weather.  No way around that.  Even when kept in my front pocket, my phone/camera power level would dive from 100 percent to zero after a couple of minutes of exposure on cold days.  (It was in airplane mode.)  The same goes for spare storage batteries.

The best I could do was store the phone close to my body and the spare batteries deep within my clothing bag.  At night I put the phone and/or iPod under one armpit after diving into my sleeping bag, and the storage batteries under the other.  Once everything warmed, I could recharge or listen to the media stored within.

Cold is for lovers.  Everything wants to get in bed with you – that is your water bottles, your fuel canister, your electronic devices, extra batteries and your sweaty clothes.  I’ve never felt so loved in my life!

My Salomon GoreTex boots froze on a couple of nights because I had no room for them in my extra skinny light weight sleeping bag.  It wasn’t a big deal.  So long as I had dry socks, my feet were never cold, even in frozen boots.

Sweaty clothes.  Only once did I have to whip off a soaking shirt and replace it at the end of the day.  The polyprop shirts I had wicked dry in a very short time after I stopped hiking.  Usually I just covered my base layer with a couple of loose wind shirts I carry for layers.  Over them, snuggled my down puffy as needed.

I often hiked in a pair of compression tights that I use for running and cross country skiing.  They don’t hold water at all.  Best of all, they provide excellent support for leg muscles and joints.  At the end of the day, slipping my rain pants over them did the trick.  No problem wearing the whole giddy-up to bed.

In an earlier blog, I nominated the ziplock freezer bag to replace the Swiss Army knife as the universal tool.  Subsequently, Tenacious Tape gave its zippered brethren a run for their money.

Somehow, a mouse got into my pack and ate a hole in the baffle between the lower and upper compartments enroute to building a nest.  My sleeping bag developed a hole on the inside.  Wondered why my tent was full of feathers in the mornings…  A three-seam corner in my tent leaked.  The stuff sack for my tent got a small rip.

Tenacious Tape (and a little silicon sealer) to the rescue. By NOC I had used nearly a whole role of tape.  I bought two new ones from the outfitter at NOC just to play it safe.  Ladies and gentlemen, this stuff works.  It’s specially formulated to STICK to the light weight nylon used in our equipment.  Keep the AMEX card, I wouldn’t leave home without Tenacious Tape.

David “Awol” Miller’s guide is the gold standard.  It’s highly accurate, though not perfect.  I carried the AntiGravity Gear strip maps as a supplement.  Gave up on them quickly.

The universal challenge with the AWOL Guide is reading the trail profile.  On days the trail looks easy, it’s hard in reality and visa versa.  A lot has to do, not with the trail incline angle, but the surface condition of the trail bed – how rocky, number of steps and boulders, roots, etc.  Just don’t be lulled into a false sense.

A lot of the trail infrastructure listed in the Awol Guide pops up during hiking season; then disappears by the end of April.  That was a tough one to learn.  Shuttlers, hiker rates, and other conveniences haven’t been there in some cases.  Also be advised that those listed in the Guide pay to be there.  (I asked.)  Nothing wrong with that, but caveat emptor.

Speaking of food, since I’m cooking exclusively in ziplock bags, I switched my stove from a Pocket Rocket to the small Jet Boil Sol.  It’s incredibly more efficient at boiling water which is all I do.

Lastly, I tented most nights near shelters.  My tent was warmer and easier to keep my “stuff” organized and safe.  Unfortunately, at a shelter in the Smokies, three meals disappeared after I hung my food bag on the bear line.  At the same shelter someone rifled my pack when I was outside cooking and took three twenty dollar bills from deep within. Lesson learned.  I’ve since acquired a wallet that hangs around my neck.  $hit happens.