It’s like this. The Doyle doesn’t serve breakfast so guests are directed across the street to Goodies Diner which serves breakfast and lunch opening at 6 am. That’s perfect hiker time for anyone wanting an early start.

I was warned about the pancakes. In fact several folks at the Doyle’s bar recommended that I order just one.

Me noshing on a singleton pancake, what an embarrassment. After all, on my mother’s side I come from solid lumberjack stock. What would Paul Bunyan think?

So I saunter into Goodies with a chip on my shoulder, somewhat like an gunslinger on the make in the old west. “I’d like the blueberry pancakes and make it a double,” I dared the waitress.

While the griddle was doing its work, I slurped excellent coffee and made small talk with the other customers sitting at the counter. I barely noticed their knowing looks. Everybody was hanging around to watch the show too!

Bring ’em on, I was thinking. This hiker is HUNGRY. Never mind that less that 12 hours earlier a giant cheeseburger with large fries planted themselves in my gut, not unassisted by me.

I was talking to the fellow next to me when clanking china cued me that breakfast was served.

To my surprise there were no pancakes. Instead my plate was dwarfed by two monster truck tires camouflaged to resemble blueberry pancakes!

They were huge. Think large Sicilian pizzas. I’d need a pitchfork to eat them. Everyone parked at the counter just smiled.

But you see, they don’t call me Sisu for nothin’. It took an hour, but I ate the whole thing. By then all the customers were gone and late for work. Nobody was there to applaud.

Today was a smart day’s hike. The second shelter was only 11 miles down the trail. The next one was an additional 19 miles further. I could stop there or tent somewhere in the middle. Since wet tents are unappealing, I’m watching it rain from a nice dry perch.

More and more genuine Pennsylvania rocks are showing up starting with 10 miles worth yesterday. It’s hard to plan my week not knowing the average number of miles I’ll be able to hike. I’m hoping I can hold off resupply until Palmerton.

It’s TGIF. With luck the rain will retard the party animals. If not, they’ll be arriving late. This is a double decker shelter and I’ve staked out a corner upstairs that I hope will be away from any action. 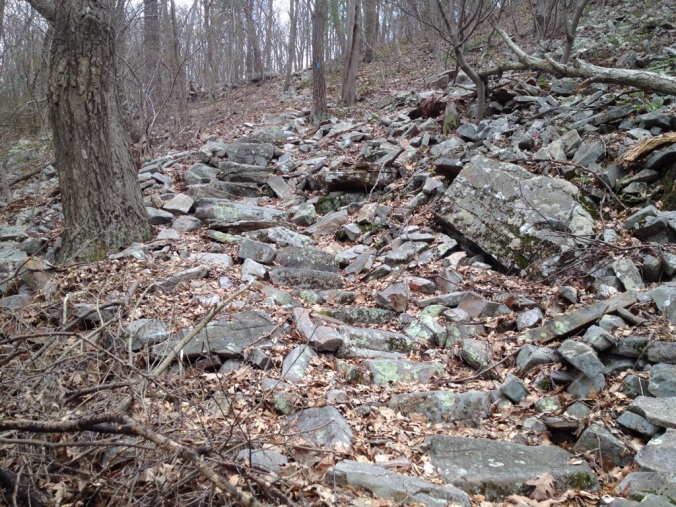