Four basic tools of the trail maintenance and forest fire trade. From the left: Mcloed, Pulaski, Rogue hoe, and a pick mattock in front of a brand new waterbar we used them to build.  Add a rock bar,  five gallon plastic bucket, a shovel, a pruning saw plus an occasional cross cut or chainsaw and you’ve pretty much got all the toys.

Shenandoah National Park, VA, August 15 – 21, 2015 — This was a physically demanding and productive week in the park.  I love to sweat, so thanks to the weatherman, we were virtually swimming in goodness.

The itinerary was chock full of fun. Saturday marked our monthly Hoodlums work day.  We enjoyed an excellent turnout for mid-August vacation season.

I groaned a bit when the short straw put my crew on a weeding expedition down a side trail that hadn’t seen much love this year.  In about five hours, six of us weeded two miles of trail with swing blades because a chunk of it is in a designated wilderness area where motors are not allowed.  We also cleaned 42 check dams and six waterbars, and cleared one blowdown!

I removed this blowdown using a 20 in. pruning saw.

Removing a blowdown isn’t newsworthy except for this.  Note the rise of the tree trunk on the right side of the photo. I expected a bit of a jump, but not all the way to eye level. It’s a good example of how bucking any down tree can be hazardous.

Immediately after the Hoodlums clock expired I hustled 50 miles toward the southern end of the park to meet up with Lauralee Bliss for a two-day ridgerunner walk, after which I hurried to join the crew I’d be working with for the remainder of the week. I was a day late, so I knew I needed to work extra hard to make it up.

The first project was fixing a mud hole created by a spring further down Overall Run trail than we were able to get during crew week in May.

The spring leaks from multiple locations and undermines the trail tread,

We don’t call Eric Jenkins the human crane for nothin’!

Our solution was to build a culvert drain and a raised turnpike to the upper/dryer side of the trail. We left the muddy part untouched because the water also rises from underneath.

The following day we rehabbed the treadway on the Dickie Ridge trail and built several new waterbars and grade dips to improve drainage.  The weather was worthy of a Finnish sauna.

Side-hilling to level the treadway and move it up hill enough to keep it from causing erosion in some areas.

It was THAT kind of day!

The heat was quickly depleting all of us, so we broke early.  I decided to spend the extra daylight checking on my Appalachian Trail Section and I was glad I did.

I found this blowdown on my trail section.

Just after cutting the first branch, another small tree came crashing down. It scared the scat out of me! 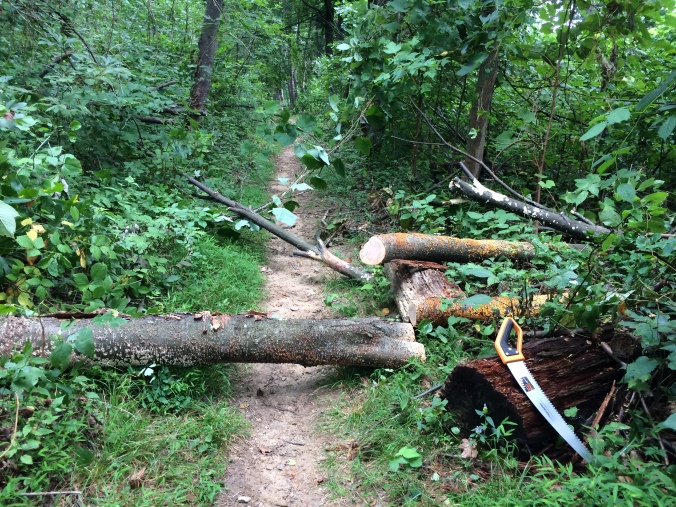 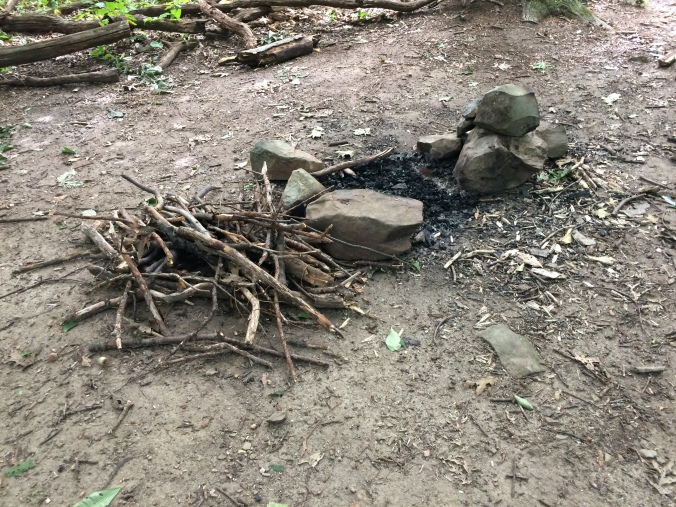 Found this illegal fire ring at an informal campsite on my section. Since destroying the last one early this spring, no one had rebuilt it until now.

Launched the rocks as far away as I could. Maybe planting poison ivy or raspberries in this space might help solve the problem, ya think?

The weather broke on the final day. The temp dropped 20 degrees and the humidity halved.  Yea!  We worked near the Elk Wallow wayside building a couple of new grade dips and waterbars.  We also repaired a huge waterbar where rain cascades down the trail like a river.

17 thoughts on “An Abundance of Goodness”