Hal Evans takes notes on trail conditions during his patrol.

Appalachian Trail, Northern Virginia section, September 5-6, 2015 —  Which was worse, the rocks or the humidity?  It’s a toss up.  “I don’t enjoy either very much,” I thought, as I marched one last ridgerunner patrol, this time with Hal Evans.

Hal, a quiet, gentle soul with a PhD in psychology, is responsible for the 58 mile section we call Northern Virginia between the northern boundary of Shenandoah National Park to Harpers Ferry, WV.

Hal thru-hiked the AT in 2010 following his retirement.  Since then he has been a ridgerunner variously in New Jersey, Pennsylvania, Maryland and northern Virginia.

Over time, he’s been working his territory toward home near the southern half of Shenandoah National Park. “Maybe next year,” he laughs. Since I understand we may receive funding for a second ridgerunner in Shenandoah, that’s a real possibility.

During my hike, I described the attractive places along the trail as “trail candy.”  If places such as the iconic McAfee Knob, the ponies at Grayson Highlands and Annapolis Rocks; or a charming trail town such as Harpers Ferry are akin to high calorie deserts, then the unremarkable trail in between must be like eating your vegetables when you were a kid. 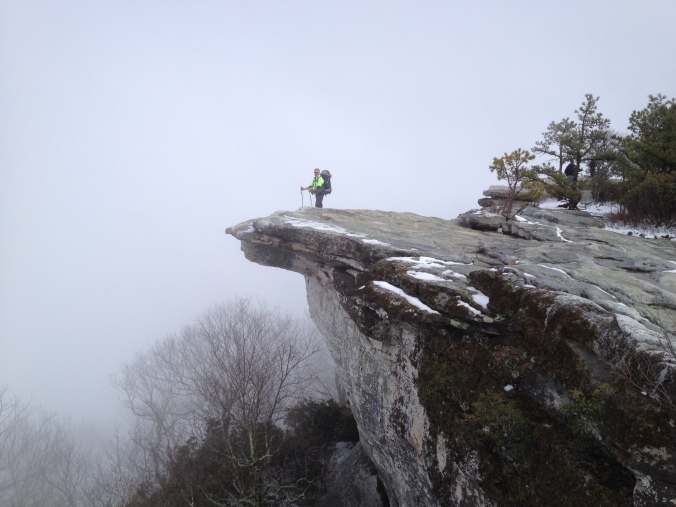 On the AT there’s a lot of figuratively nutritious trail of which your mom would approve.  Hal’s section is so nutritious that it might qualify as broccoli or kale. In spite of its inherent charms – Front Royal, VA, Bears Den Hostel, Blackburn Trail Center and a couple of overlooks – for the most part, this is hike-over country that hikers endure as they lust for the next treat.

Hal and I met Saturday morning at the Appalachian Trail Visitor Center in Harpers Ferry.  We left his truck there and drove my car 21 trail miles south to Bears Den Hostel where we would begin our work.  That way we could hike mostly down hill.  Note:  It sure fooled me and I can read a map!

Northern Virginia is rocky to say the least.  It features the last of “The Roller Coaster,” a 15-mile section of strenuous and infamous PUDS – pointless ups and downs.

Hikers don’t come to this section to meditate.  They come to sweat and nostalgically relive the Pennsylvania rocks.  In fact, I’ve heard that, for good measure, this section adopts Pennsylvania’s orphan stones.  Sure am glad they have a good home.

We cleaned up several “stealth” campsites and scored two grid irons and a frying pan among other heavy junk we had to truck out.

At one of the campsites we cleaned up, Sherlock might have deduced that this perp was never a Boy Scout because he was hilariously unprepared.

First he cooked, only to subsequently realize that he couldn’t clean his dirty frying pan.  Rather than hike it out, he left it. (It’s almost always a he.)

Of course when morning came, this genious realized he needed a hole deeper than forgetting the means to clean his dishes.

Sans TP, the hapless primate used a far less effective expedient that had to be the only thing at hand less effective than poison ivy leaves – a plastic bag.  Bet his trail name is Monkey Butt.  I chuckled at the poetic justice even as I took care of the mess.

Being Labor Day weekend, we figured more trail traffic than we found and the amount of trash was less too.  Lucky us.

We found some strange markings that extended from this spot along the trail far into the woods beyond the trail corridor.  This is the type of anomalous encroachment that ridgerunners find and report.

Hal photographs a blowdown he will include in his weekly report. The photo will help the district manager and overseer determine the best means to clear it.  This one will require a chain or crosscut saw for removal. Those are poison ivy vines all over that down tree.

We spent the evening at the David Lessor memorial shelter with some very nice people, then pressed on to Harpers Ferry early Sunday morning. 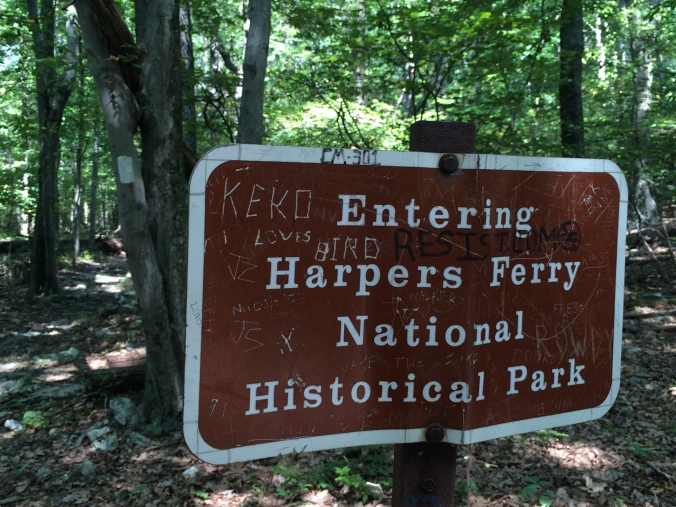 The Harpers Ferry National Park extends far beyond the area where John Brown’s raid occurred. Civil War battlements extend miles beyond the town itself.  It’s beyond me why people think they need to tag everything. 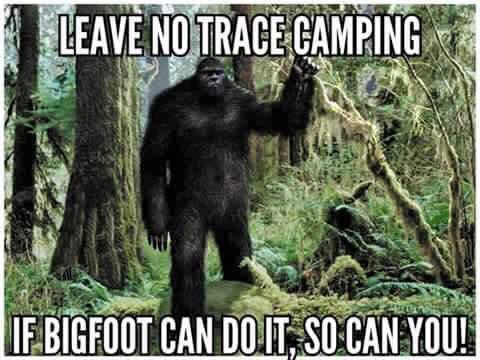 This is my last ridgerunner hike of the season.  Unfortunately I was unable to walk with Clare Arentzen who patrols southern Pennsylvania.  It’s a miss, but not huge.  Clare isn’t planning to return next year because she has something far better in mind.  She’s going to be on the AT as a member of the thru hiker class of 2016.  Here’s wishing a brilliant Princeton grad the best of luck and endless trail magic.