Bobblets Gap Shelter, AT NOBO mile 742.5, Friday March 21, 2014 — For the first time this year song birds sounded the morning alarm! Until now, the forest has been as mute as a mime.

Just as the song birds voiced their pleasure, I spied dwarf daffodils marking their corner of the camp area. But, … There’s snow and sleet in the forecast for Tuesday. Seems Old Man Winter just won’t exit stage right or wrong. Dude! Take the hint!!!

During the day’s walk I spotted Carolina wrens, black capped chickadees, a tufted titmouse, a dark-eyes junko and a cat bird. These all appear at our feeder throughout the winter, so there’s no surprise other than why their spring concert season premiered today.

I also saw a honey bee, surely a sign of spring tho nothing is blooming. P.S. Oh yes there is.

We’re entering the area where the AT crosses over the Blue Ridge Parkway for the next hundred miles or so. It’s the same drill as Skyline Drive in Shenandoah National Park, only minus the waysides where there’s food within easy reach.

I still haven’t forgotten that I did not get my Blackberry Milkshake at the Elk Wallow wayside because the congress closed Shenandoah… Getting one is on my bucket list for sure. Better than beer! 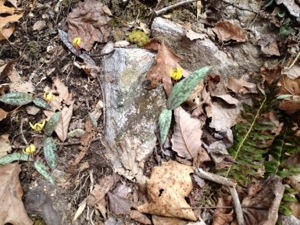 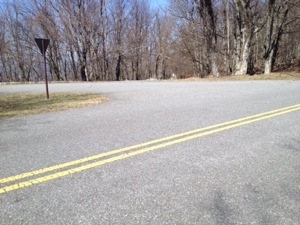