Great Smoky Mountains National Park, February 20, 2015 — I’ve spent the past week gettin’ ready for love.  Oh, not THAT kind. I’ve been with a group of people training to assist hikers on the Appalachian Trail this year.  We love the trail and the people who hike on it.

Our base camp is a modern style house from the late 50s or early 60s owned by the National Park Service.  During the summer it is basecamp for the trail crews that work in the park.

Our mission is to educate hikers primarily on “Leave No Trace”™ principles, encourage them and help them in practical ways.

An estimated three million people walk at least some distance on the Appalachian Trail each year, so Leave No Trace is a big deal.  The national scenic trails, of which the AT is only one albeit the most famous, are being “loved to death.  The number of users continues to increase at a high rate.  Therefore, the impact on the environment from human footsteps alone is enormous.  Add their feces and urine, toothpaste, dishwater, dropped litter, abandoned gear, fires, animal disturbance and all the rest together and the sum is enormous.

Unfortunately, individual hikers fail to appreciate that their impact is additive to all the others.  That’s why Leave No Trace is more than Pack it in.  Pack it out.  Hikers are expected to plan and prepare for everything they might encounter on their hike.  Understanding how and where to camp prevents erosion and unsightly scars.  Knowing how to dispose of human waste properly is critical to preventing water contamination and disease. Respecting wildlife, fellow hikers and campers, leaving what you find undisturbed and generally being considerate round it out.

Here I’m demonstrating how to hang a food bag in a way that is not tied to any tree.  Bears have learned to break ropes tied off to trees and feast on what falls to the ground!

Human food kills bears.  Once they become unafraid of humans, bears have to be trapped and moved, or worse, destroyed. They are magnificent animals.  Being thoughtless has sad consequences.  The AT-wide bear statistics weren’t encouraging.  Bear territory is shrinking and the animals are only trying to find food.

Had a small bear encounter at the outfitter in Gatlinburg, TN. 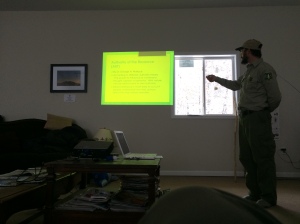 During the week, the Forest Service taught us a lot about hiker/camper psychology and methods to be persuasive without confrontation.  Nobody wants to hear that they are a screw-up.  Above all, we learned to count small victories. 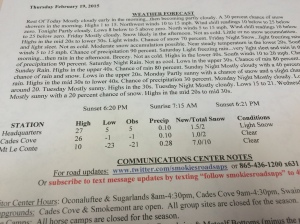 Then there’s the weather.  Minus 23 at altitude in the Smokies!  Holy frostbite Batman!!!  My gear will get me to -15F at best with a miserable night.  I’ve experienced and slept outside in -50F in Alaska and northern Minnesota.  I can’t carry that kind of gear over these mountains.  Best to stay in town when the weather forecast looks like this.

Today I drove to Hiawassee in north Georgia to visit a couple of hostels and assess trail and weather conditions.  There weren’t that many hikers around.  Several had been driven back to or into town by the subzero temperatures.  They said the snow wasn’t a big deal, but that there were a lot of downed trees to impede progress.

Ridgerunners/trail ambassadors carry large pruning saws to attack blowdown up to about a foot in diameter.  At a minimum, we can trim away the branches from a large trunk.  The going will be slow next week.  Can’t wait.

Tuesday the Georgia crew meets with the Forest Service and the local trail club for coordination.  Let the games begin!