Kensington, MD, April 1, 2015 — Bill Bryson wrote a wonderfully humorous book entitled A Walk in the Woods almost 15 years ago.  It is a story about two totally unprepared old pals attempting on a lark to thru hike the Appalachian Trail.  When I read it, I thought it was humorous fiction.  After ridgerunning in Georgia this March, I know it’s not.  It is as true as true can be, and Bryson was an astute observer.

The movie of the same name, starring Robert Redford and Nick Nolte, will be out this summer.  I can’t wait to see it, but I worry about those who do and then think they’re going to jump on the trail without a care in the world and hoof it up to Maine.  Not that there aren’t plenty of folks hiking this way already.  I just worry how many more of these unprepared innocents will join in the frolic over the next few years, and more importantly, what their impact will be on the trail and its environment.

This blog has noted the incredible number of clueless hikers  observed last month as they attempted to foible themselves through Georgia.  How anyone could jump into the woods having never set up a/their tent before, or show up with packs stuffed with so much that they can barely carry them – with all their gear still hermetically sealed in the original boxes – is beyond any level of sanity I can conceptualize. 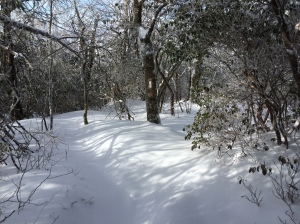 How people can forget that the sun doesn’t always shine, that the days and nights are not always warm, and that rain or snow can be bitterly cold is beyond me.  Misery does not love company on the trail. 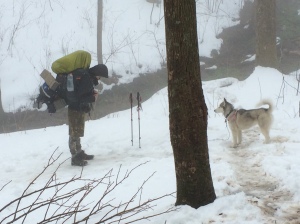 Under the wrong weather conditions – cold rain sleet for example – you could become hypothermic and cease to exist or be seriously injured in the southern Appalachian spring.  It’s happened recently.

Four components of success defined themselves as I observed both the prepared and unprepared go about their business.  I thought a lot about them, comparing what I saw this March with my previous experience on the trail and elsewhere.  Some may disagree with my priorities here they are anyway.

FITNESS.  Being fit, especially cardio fitness, can cover a wide range of other deficits, particularly in older and female hikers.  I couldn’t count the number of late middle age guys (mostly) who, for decades had been chained to their office desks until the week before they started, when they were suddenly paroled to pursue their retirement dreams on the AT. Too many of them went from zero to 60 and back zero in less than a week.

Guys, your high school sports days were close to 50 years ago!  Take a year to get yourself in shape.  Couch potato millennials fall into this same category. What did they think would happen when they rushed to Springer Mountain with little or no prep?  That’s why about a third of hikers don’t make it past the first 30 miles.

As I hiked my patrol route, I’d watch the out of shape hikers sweat their way up hill chipping tiny step by tiny step up the trail, their wheezing breath hissing like dying steam engines suffering from leaky piston seals.  Pure panic defined pallid faces as the harsh realization sunk in that they were in for more than they bargained.  Their knees quivered under both the oppressive weight of their bodies and the clutter of unneeded gear strapped to their backs.  Their fun meters were pegged at zero.  So much for a walk in the woods. 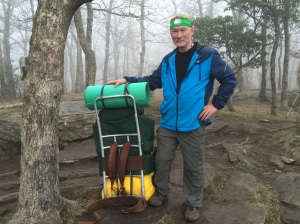 Some folks are old school, but they’re in shape and prepared to go.

Being fit helps prevent common orthopedic injuries, not to mention that you can hump more weight on your back.  Would anyone think that it might be smart to at least attempt lose some weight and/or get into shape before day one?

EXPERIENCE.  Knowledge.  Know-how.  Call it what you will.  Knowing how to live in the woods, and what to do if and when, can be priceless.  Traditionally we might consider learning what’s in the Boy Scout Handbook a good starting point, and it is if you have an up to date copy, not the ancient one with which I grew up.  Excellent information is available on line or in a range of recent how-to books.  Then there’s the confidence born of having been spent a little practice time living outdoors. 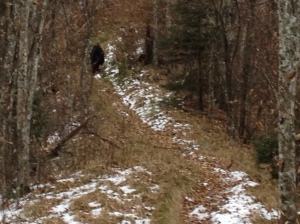 Experience is the best teacher and makes for fewer goof-ups in the woods. AT hikers should know how to hike in the rain and stay dry, stay warm and above all, stay clean.  How about pitching a tent in a storm so it won’t be flooded or blown down?  How big a knife does one need, not want, but need?  First aid anyone?  What do you do if you tear your ACL or impale yourself on a protruding branch?  You should know ’cause 911 response is several hours, if not a day or more away. Leave No Trace anyone?

How about them bears, anyway? 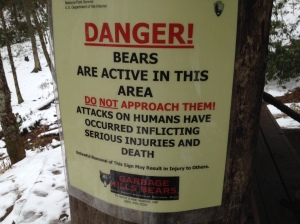 GEAR.  You can buy your back weight down if you can afford it, but more folks are on tighter budgets than I would have thought.  They simply can’t afford to equip themselves with hyper-light gear.

The reality is that most of us cannot afford a $600 – $800 Cuben fiber tent weighing mere ounces, much less the full boatload of gear made from this miraculous fabric – rain gear, food bag, pack, etc.

So, what do people do?  A good set of lighter weight gear costs between $1,000 and $1,500 depending on how much of it you can buy on sale.  This type of gear, with five days food and a liter of water, will get your total winter pack weight under 35 lbs. or less depending upon what you think you need to bring.

Properly fitting light weight and flexible boots or trail runners along with dry feet help prevent blisters, the scourge of any hiker.

Unfortunately even that much money is too much for many people.  Their alternative is to buy heavy gear from Walmart or army surplus, either that or they repurpose older but much heavier gear from previous generations.  They pack canned food because they cannot afford the lighter dehydrated meals.  This route alone doesn’t deny success, it just makes everything harder.

Some hikers don’t know what to buy, even if they can afford it.  That’s what produces the over sized 70 lb. packs stuffed with all sorts of useless trinkets.

Binoculars, camp chairs, bear bells, heavy stoves and stainless steel cooking pots, Carhart canvas jackets and other detritus is what finds itself strewn along the trail. Folks start sinking under the tremendous weight and desperately heave it overboard in hopes of staying afloat as did Bryson’s sidekick Katz in A Walk in the Woods.  Remember:  Are you on the AT to camp or to hike?

ATTITUDE.  Like the Little Engine in the storybook, if you think you can, you can.  Self-confidence and a bit of bravado can take you a long way. Yet, self-doubt racks too many hikers.  The most common question is:  “What have I gotten myself into?” That’s when I want to roll my eyes and intone “Duuuuuude! What were you thinking – that is if you were thinking at all?” 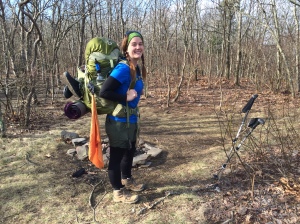 Being trail ready on day one is priceless.  Showing up on the starting line fit, knowledgeable, properly equipped and confident isn’t a guarantee, but it gets you off to a great start.

12 thoughts on “Walking in the Woods”