Harpers Ferry, WV, May 26, 2015 –There I was doing my best Captain Kirk impression as I sat in the command chair behind the counter of the Appalachian Trail Conservancy (ATC) visitors center when the door opens and I hear a cheery, “Hi Sisu!”  (Sisu is my trail name.)

To my delight, in walks Emily Leonard.  At least that’s who she was when I camped next to her and her husband on Springer Mountain, GA in early March.  Now she is “Black Bear,” an awesome thru hiker who remembered me promising that I would take her ‘half-way photo’ if she reached ATC HQ on a Tuesday, my volunteer day.  Well, she did and there I was wearing a giant smile in salute to her presence and accomplishment.

Emily is a former teacher and soccer coach who lives in Maine.  She sounded and looked strong. After the formalities, I treated her to a healthy, read leafy green-colored, lunch at a quirky local restaurant. Our conversation quickly established that she’s having a wonderful time walking in the woods.  You can follow her blog at:  http://happyhiking.bangordailynews.com/category/home/  I really hope that Black Bear goes — ALL THE WAY!

By way of additional insight, I wrote about Emily anonymously in one of my blogs from Georgia.  She was a hiker with the ultra light Cuban fiber tent pitched with so much slack that I worried might blow away in a strong wind.  After staying the first night, her husband returned home to Maine and work while Emily hiked on.  That wasn’t the first time I learned to never judge a pack by its cover.

Of note:  It turns out she ditched that tent for a range of reasons and is using the one her husband had.  So much for hi tech. 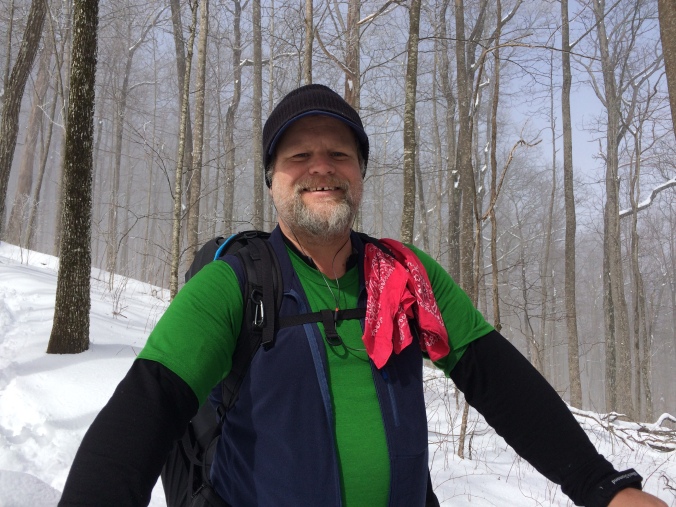 Separately, a hiker named “Bonafide” aka “Winter Walker” phoned me from Bears Den hostel last night.  I first met him in Tennessee in December 2013 during my thru hike.  That year his doctor told him to lose some weight, so he walked from his home state of Vermont to Tennessee and back to Harpers Ferry.  This year he decided to thru hike and I met him plowing through the north Georgia snow back in February.

His call was to check in being that he was nearby. When I mentioned that the movie, “A Walk in the Woods” would be out in September, he unleashed a tirade about hikers who mess up the woods and don’t follow Leave No Trace principles.  It was instructive to say the least.  It seems like time and distance don’t weed out all the bad apples.

The “Walk in the Woods” trigger was this:  The Bill Bryson book features many scenes like the ones I reported from Georgia with people tossing trash and worse all over the trail.

He asked me what I thought the answer might be.  My response was one word:  Babysitters.  That’s what you get when you act like a child.

Here’s the trailer for “A Walk in the Woods:” It promises to be a fun movie.