Hiawassee, GA, March 17, 2016 — It was time to say farewell to my intrepid friend Denise and head home for a Hoodlums trail crew work weekend, since snowed out, but that’s another story.

I really didn’t want to go.  In fact, the bug bit me.  I really, really wanted to hike all the way home.  A cool thousand miles would be a great way to celebrate spring and work off my winter weight gain.  Unfortunately, my volunteer career comes with responsibilities requiring my presence in places other than the southern Appalachians.

I’ll be up front.  I think Denise is going to make it.  At the very least she has better odds than most.  She’s stubborn, positive, and has the self discipline of the soldier that she once was. Her competence in the woods counts for a lot.

For most people Georgia’s 80 miles are a bitch, plain and simple.  Although the treadway itself is mostly smooth dirt, the hills are steep and a good test of will and fitness.  The first day out, Denise’s challenge was compounded by a nasty upper respiratory infection (URI).

Being sick in the woods isn’t fun.  She suffered, yet she persevered without complaint – good sign!

Along the way we met a ton of people.  At one point she asked me if there was anyone I didn’t know.  Here we are with Erwin, Tennessee’s “Miss Janet” Hensley, one of the iconic trail personalities and genuinely good folks on the trail.  She’s referenced in memoirs going back to the turn of the century.  It’s fair to say those stickers help keep her van in one piece.

The weather this season has been unusually warm leading to a slightly greater number of hikers making it out of Georgia.  In other years adverse weather tends to wash out a lot of inexperienced people.

The warmth this year has led some hikers into believing spring has sprung.  They have sent their weighty cold weather gear home.  Not Denise.  She knows that she’ll  be hiking over 5,000 ft. (and at one point 6,000) for the next 400 miles.  Not until you’ve seen the wild ponies at Virginia’s Grayson Highlands state park just south of Parisburg is it safe to shed most of your cold weather gear. 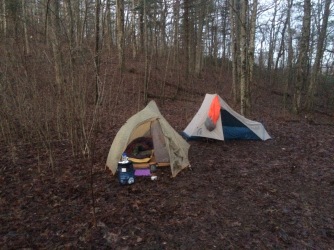 Denise started ahead of the big bubble.  By March 15 last year I was counting around 150 hikers per day.  They fill the shelter/camping areas beyond capacity in spite of the heroic improvements made by the Conservancy, the Georgia Club, National Forest Service and the Appalachian Long Distance Hiking Association.  Knowing the area helped us find good flat spots away from the tent cities.

We hit one day of intermittent rain last week.  Our training hike in the cold rain last spring paid off.  The orange rain cover is to give the hunters a visible aiming point.

I’ve always loved the way life renews itself and finds a way to survive and recover.  That tree is a survivor.

People still need to learn how to Leave No Trace in the woods.  It’s gross, and a lot worse than this in many places.

Meanwhile, our intrepid hiker has invaded North Carolina.  One state down.  Thirteen to go. She’s fine.  I’m the one wringing his hands.   I’ll continue to cross post her blogs as her hike unfolds.