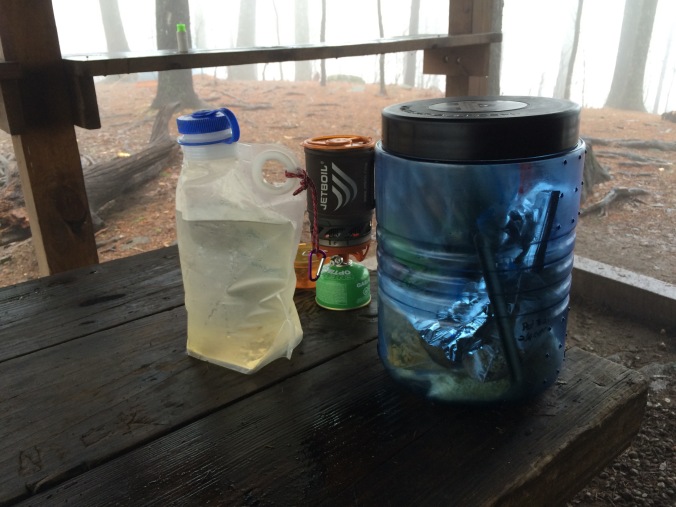 The Appalachian Trail in Georgia, March 2016 –The bear canister debate can get intense.  A lot of people like to troll this subject. My intent is not to rip the scab off that wound or relitigate the question here.  I’m only reporting observations I made last month as the hiking season started in Georgia.

The fact is, according to the Appalachian Trail Conservancy (ATC), U.S. Forest Service and other agencies, that human interaction with bears is increasing on the southern 500 miles of the AT and the ATC is recommending that hikers use bear canisters from Springer Mountain to Damascus, VA.

Last year I had the occasion to be a ridgerunner in Georgia during late February and March. This year fortune granted me the opportunity to hike the state again with a friend as she launched her thru hike. Comparing bear canister use between these two years is interesting.

The conversation on the trail about protecting food from bears also changed some over the course of the past year.  This is what I heard and observed.

As a ridgerunner I was issued a Bear Vault BV 500 (there are other brands) because my duties required camping within the bear canister-required zone in the Blood Mountain area.

I hate to say it but most hikers who showed up at Woods Hole shelter were ignoring this U.S. Forest Service requirement. They were unaware that the local bears had learned to shake food bags off the cable there. 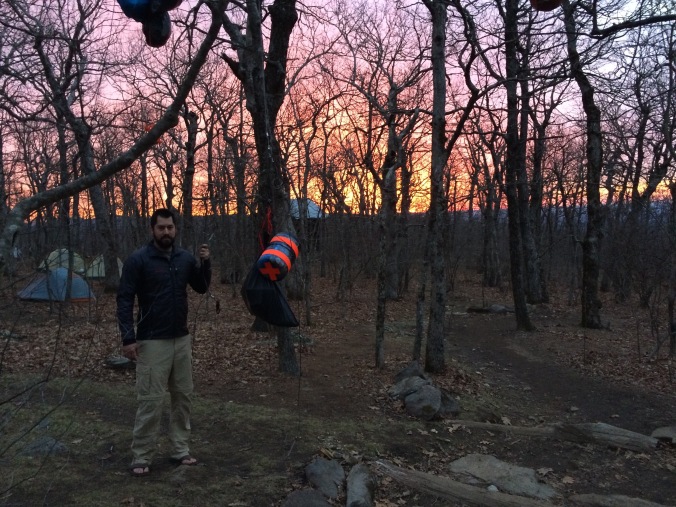 In total, during my time in Georgia last year, I saw a very small number of bear canisters over the five week period I was on the trail.  This one was at the shelter on Springer Mountain.

After conversations with hundreds of hikers over the past couple of years, my guess is the majority of thru hikers don’t take bears all that seriously thinking that what ever happens, it won’t happen to them.  Moreover, most hikers don’t understand bear behavior well enough to recognize the many different ways bears might be attracted and habituated to human food.

With the number of hikers rapidly increasing, especially the large numbers starting in the south, this is unhelpful – mostly to the bears.

So, last year the ATC initiated a Leave No Trace-inspired effort to promote the use of bear canisters.  Remember what the rangers say:  A fed bear becomes a dead bear.  Progress?

I arrived on Springer March 8 and spent the night talking to hikers and waiting for my friend to toe the starting line the next day.  The first thing I noticed was three bear canisters.  As we hiked north, I noted about a dozen or more or so.  These were carried by older hikers – certainly they were over 30.  They’d heard about and taken the ATC’s advice seriously.

Bears are always a topic at the beginning of a thru hike.  For most, the question more about whether bears are a legitimate threat to them, not whether their habits can be a threat to bears.

A lot of hikers said they had considered food protection but had decided that the canisters were too heavy (mine weighs 2 lbs. 9 oz.), or that they would occupy too much space in their packs to make hauling one worthwhile. At around $80 retail, they are expensive too.  Several implied they would rent them if that were an option.

Beyond canisters, people were debating whether or not the Ursack – made out of Kevlar, the material that bulletproofs bulletproof vests – was a better bet.

Ursacks are lined with a thick plastic bag that functions much like a Zip Lock.  This helps protect the contents from moisture and reduces the aroma signature.  Depending on size, their costs range from $55 – $90, so they’re not cheap either.

The white bag is an Ursack.  It must be tied to a tree to be effective.  My Bear Vault is in the far background.

Ursack’s are approved in certain areas but not in others, including the AT.  It seems that even though bears can’t chew through them, they can still crunch up the contents and get a small taste – and that does not solve the problem.  There’s some argument about how varmint proof they are, though their website says tests show they stand up.  No doubt supporters would offer supportive arguments.

The attraction of Ursacks lies both in reduced weight and the amount of space they take up inside a pack.  Being pliable, unless you’re using their aluminum shield, they are much easier to pack around.  In other words, you can jam more stuff in your pack.

Bear canisters are designed to be left on the ground, yet some people still use the bear cables, poles or boxes when they are available.

The Bear Vaults have grooves in the sides designed to aid strapping to the outside of a pack.  This doesn’t work so well with most internal frame packs. They easily strap on top of some Granite Gear packs.  I saw one in Georgia and liked it.  Unfortunately I was too dim witted to get a photo.

Although we’re not going to see the masses rush to embrace bear canisters or Ursacks in the near future, it appears the conversation about not habituating bears to human food is growing and more positive. That direction, in my view, ultimately helps serve the coexistence of both magnificent bears and intrepid people. I’m cautiously optimistic over time.

Full disclosure.  I bought a Bear Vault BV 500 this year and hiked with it in Georgia.  I also have a sow with cubs resident and often seen on the AT section I maintain in Shenandoah National Park.  I frequently hang my hammock and camp over night on my section when there’s a lot of work to be done. In that context alone, using a bear canister makes sense for me and my momma bear.  Sisu