Actually I wheeled into town less than a half hour later.  I’d been stopped for gas in Connecticut and didn’t realize how close I was.  After minor confusion I found Robin and her new friend Sonia “Soho” Horschitz, a 33-year-old German hiker she serendipitously met a couple of days after I left her back in New York.

These two were amazing together.  They meshed like Mercedes and Benz and could finish each other’s sentences as they delighted nearly nonstop over the merits of cream cheese and other hiker treats.  Being along for the ride with these two charming people was pure delight.

After lunch in Great Barrington, we dropped my Subaru at the local hostel in Sheffield.  Its owner, Jessica Treat, shuttled us to the trail and we were off.  She would shuttle us back at the end of the hike from as far as we could get toward the Vermont border some 76 miles northward. 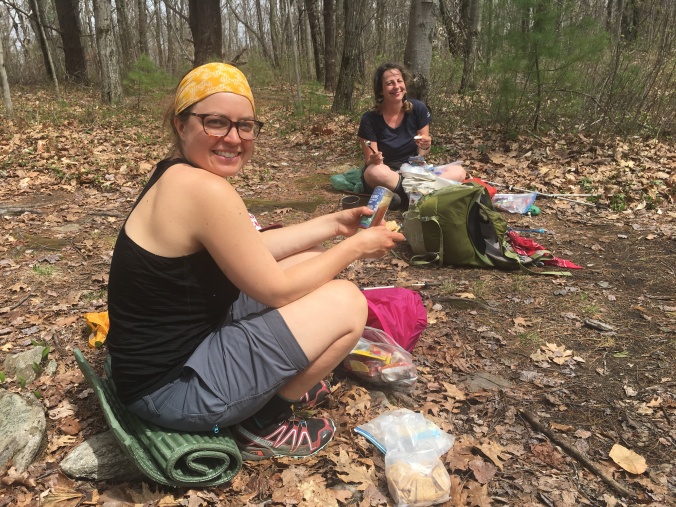 The first couple of days toasted us like summer.  Here the lunch menu features cream cheese and Triscuits slathered in honey. The delight is obvious.  It took me awhile, but I eventually became a convert.

I’d never seen so many Trout Lilies.  This plant ultimately became the bellwether in our quest for the edge of spring. 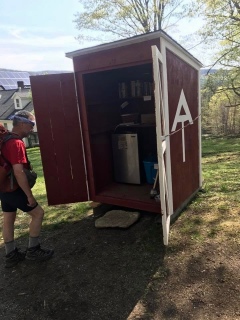 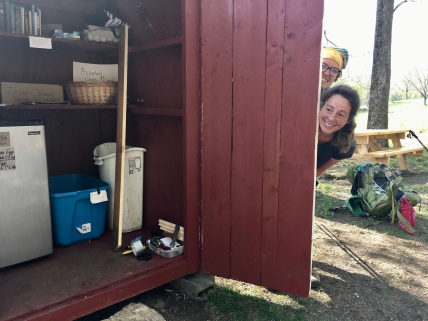 Just outside Tyringham we found this kiosk.  A young entrepreneur had established a trail magic business.  Cold drinks and snacks at a very fair price!  Smart.  Hope he does well.

However, for us, Tyringham is where our weather luck expired.

After topping off at this much appreciated kiosk, we faced a respectable climb to the cabin at  Upper Goose Pond where Miss America and Soho had planned a rest day (zero) in the field.  Along the way we hoped to dodge the forecasted rain.

No luck.  The rain began to spatter shortly after we started our climb.  Soaked in sweat, we decided to minimize on rain gear, even opening our pit zips to shed the extra heat we expected to be generating while climbing in the warmish rain.

Boom!!! The first lighting strike was “danger close.” Link to DANGER CLOSE artillery And so were dozens more.  With nowhere to safely hide, we pushed on as close to double time as we could safely manage.  The lightning exploded all around as the cold rain drenched us and the ambient air temperature crashed to the low 40s (F).  Not at all what we had anticipated. 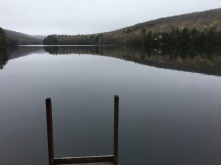 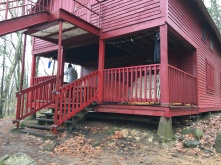 We stumbled onto the cabin’s porch frozen and shaking from the icy rain. Camping on the porch is allowed, so we got into warm dry clothing and made camp.  It would rain almost all night and the next day.

We shared some firewater for medicinal purposes.  Soho shared, but make it plain.  She likes bier besser.

After Upper Goose Pond, the warm weather disappeared, but reducing the mount you sweat is really a benefit when you’re making miles. 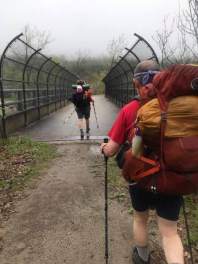 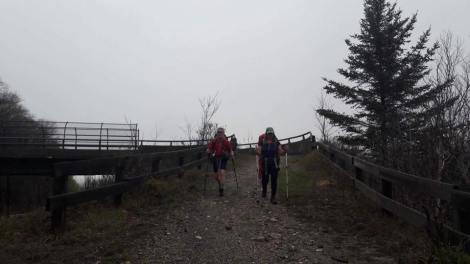 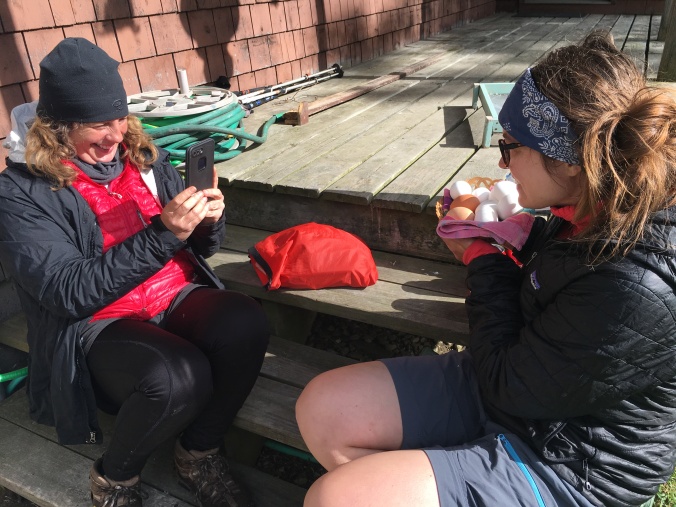 We bought hard boiled eggs from the “cookie lady.”  Soho’s philosophy was moderate miles.  Good sleep.  Fresh food.  I learned to like it.

Camping at the cookie lady’s.  Looks warm, but it was 40F. 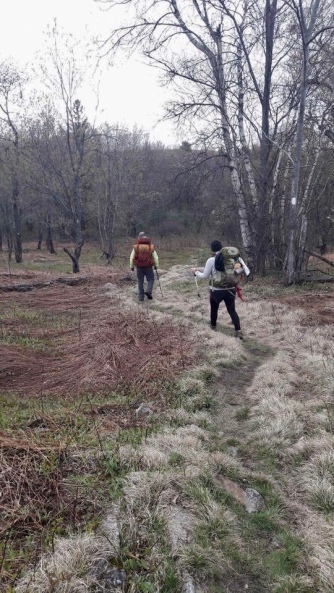 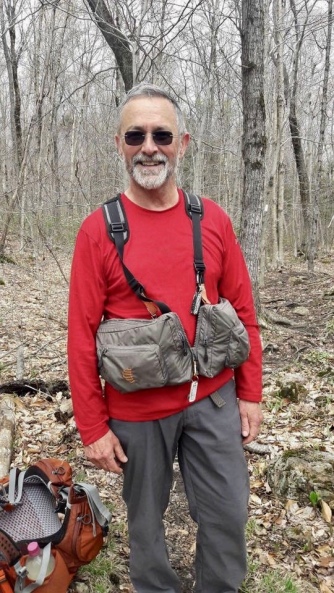 On the way to Dalton for a shower and resupply.

After Dalton we faced a pending storm that eventually dumped 1.5 inches of rain on the trail, turning it into an endless series of streams and mud pits.

Knowing what was coming, we pushed past Cheshire, Mass. to the Mark Noepel shelter where we planned to ride out the rain high and dry, less than a full day from the Vermont border.  The hike into Upper Goose Pond had taught us a lesson.

The Massachusetts shelters are mostly of the same design with a loft.  Up there, we were out of the wind and slightly warmer than if we’d stayed below.  The windows are plexiglass.

We tucked into our sleeping bags to spend the day thankful we weren’t hiking in the cold and rainy weather.  We could see our breath.  Note the cookie lady’s eggs atop the orange and tan stuff sack.

Shot this while the wind was relatively still.

With three days of rain in the forecast Robin and I decided to exit.  She’s within sight of Vermont.  She only has a few miles in Vermont to finish this fall before she completes the AT. 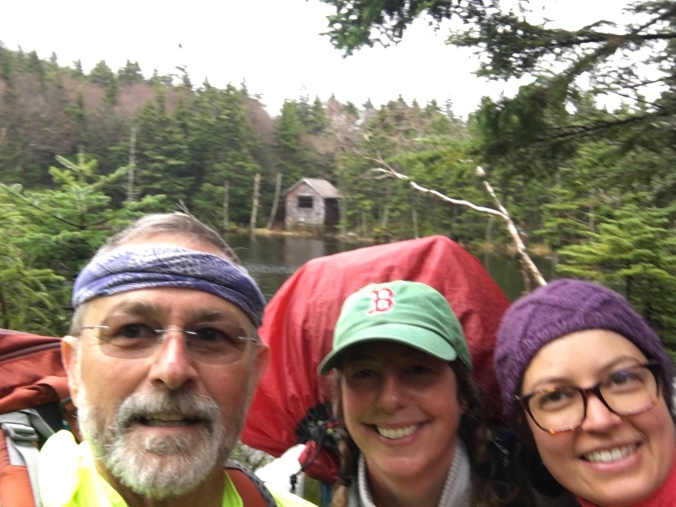 We bid Soho farewell on Mt. Graylock, the tallest peak in Massachusetts. This gentle and genial soul hiked on into Vermont. We hiked to the bottom of the mountain because the road to the summit had not yet opened for the season. 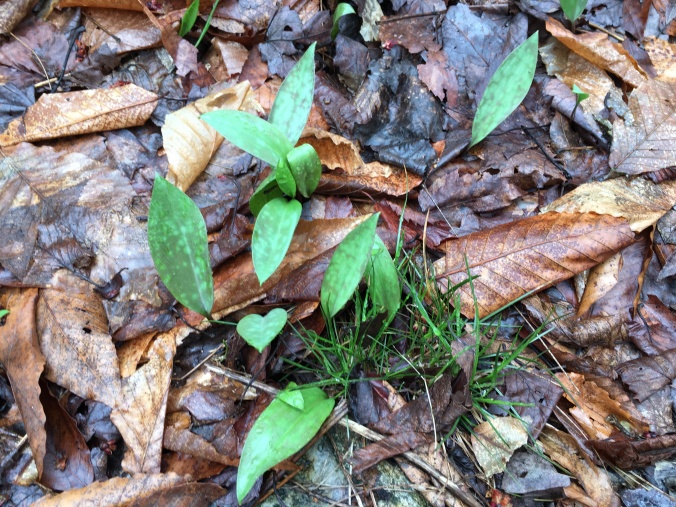 The Graylock summit was windy, wet and bitter cold. I looked down only to spy trout lilies whose flowers had not yet bloomed.  A day later Soho phoned to say that the thermometer and snow in Vermont were forcing her off the trail.  Without doubt we had found the edge of spring; and on that edge the cold wind sliced through our hearts and blew us in new directions.  Our journey had ended.

8 thoughts on “Searching for the Edge of Spring”