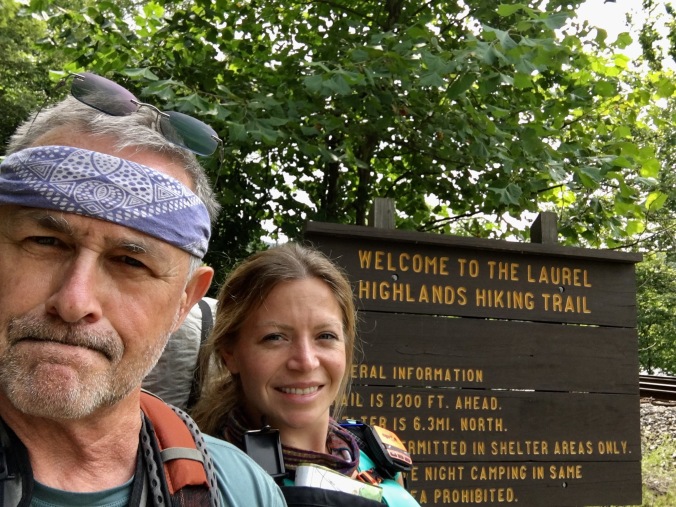 Like a lot of things these days, this trip started on social media.

Chrissy Funk, a woman I met at the Appalachian Trail Flip Flop Festival this past April was looking for people to hike with her on the 70-mile Laurel Highlands Trail.  She recently completed a LASH (Long-Assed Section Hike) of several hundred miles on the AT and needed to keep moving while waiting for some personal business to resolve itself.  Having barely run or hiked this summer, I needed the exercise.  There you have it.  Instant common cause.

Before we make assumptions, let’s review the lesson I learned last year hiking the infamous Roller Coaster section of the AT with my fellow Hoodlums trail crew member Denise Benson.

As you may recall, I joined Denise 1,000 miles into her thru hike.  She actually moved so fast that eating her dust  was an impossibility –  and I was in decent shape then, especially compared to my current physical state.

Now, with Denise’s ghost hanging in my memory, here comes Chrissy.  Let’s downplay her steely trail legs, her strength and conditioning as a body builder, and our 35-year age differential.

Remember that lesson?  Maybe I should have bargained for a handicap or at least a speed limit.  Actually it worked out better than I hoped.  We were compatible partners, our pacing wasn’t that far off, and we had a lot of fun.

Let’s cut to the chase.  This trail is a gem, a pure delight.  If you’re looking for a relaxing or a rejuvenating five-day hike, this is it.  Maybe the timing was lucky, school had started for the locals, but we had the trail to ourselves.

The trail is marked with yellow blazes.  On the AT yellow blazing has a negative connotation, describing unethical hikers who hitch hike to skip large sections of the trail to avoid hiking them. On the Laurel Highlands Hiking Trail yellow blazing is legit and it’s well marked.

Our plan was to northbound (NOBO) starting at the tiny resort town of Ohiopyle.  For more, click here.  The name refers to the native American word for the local waterfall meaning ‘it turns very white.’

The finish was 70 miles ahead near Johnstown.

Sunday was start day.  For logistical reasons I arrived on Saturday so we could recon, get maps and place a vehicle at the end of the trail.  Chrissy’s grandmother was my lovely host. Sunday morning we drove to the southern trail head itching to go. 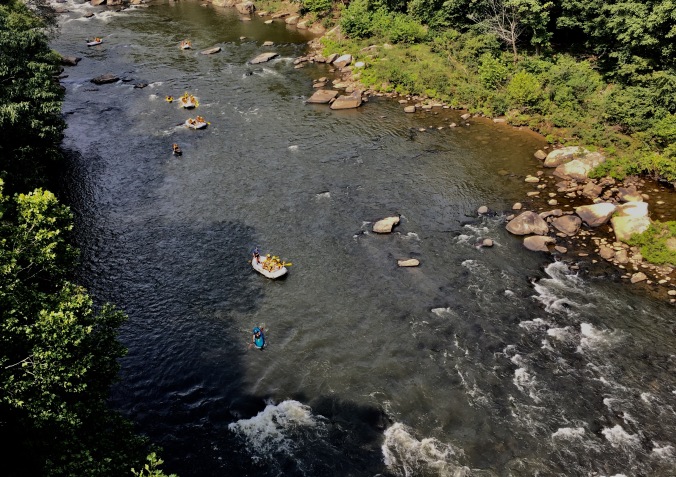 We paid and registered for safe parking at Ohiopyle.  Of course nothing was clearly marked, so we initially took the wrong trail.  The good news is that we got a great view of some happy rafters from a bridge hung high above the Youghiogheny River. We had doubts that we were on the correct trail.  On that bridge a kindly ranger turned us around after Chrissy smelled a rat and asked for directions. (I am aware of the stereotype about gender and directions.  It’s accurate in my case.)

View of the Allegheny Passage at an overlook within range of day hikers.

The hike opens with an eight-mile climb.  It’s not particularly challenging compared to the grades found on most of the AT.  The last mile or so is the most difficult with a gain of about 1,200 ft./mile.  The good news is that the first shelter area comes at mile six so you get a break.

Each mile is marked with a concrete marker, meaning that averaging two miles per hour, one of these puppies slides by every half hour both marking progress and allowing hikers to calculate their speed. It’s the sense of progress helps this hike literally fly.  We were a bit faster.

The blue blaze trails to the camping areas are marked well enough that even a zoned-out hiker won’t miss one. 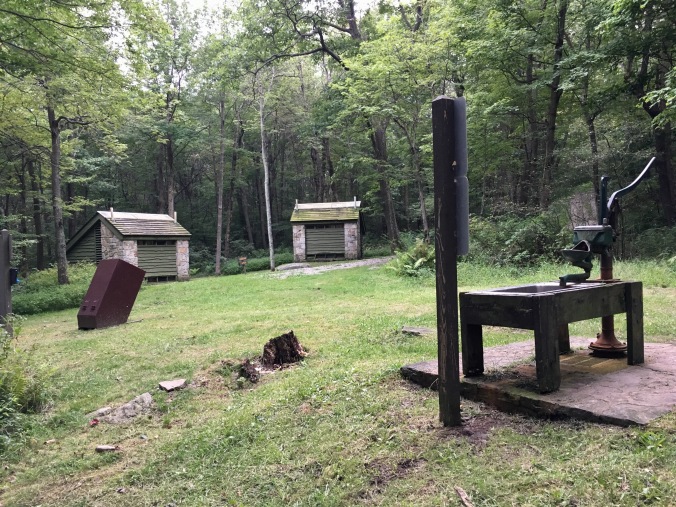 Stay tuned for even more good news.  The shelter/camping areas are front country!  Each features a well (non-potable), vault toilets and bear-proof trash. It was great not having to pack out a ton of trash.

A couple of the wells had too much iron in the water, but the Sawyer filter easily removes the metallic taste. 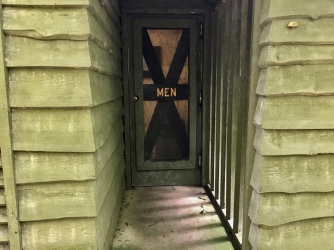 The rugged doors on the privies are allegedly bear proof.  Although unlocked, they open outward which is supposed to foil a curious bear.  I still think a smart bear could figure out how to open them. 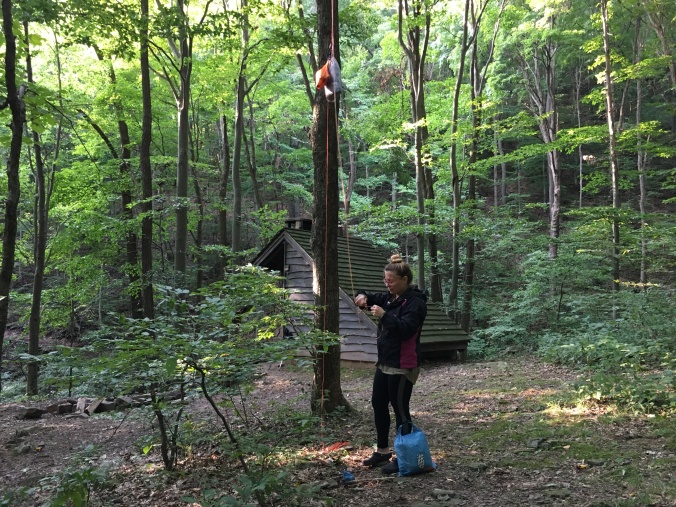 We saw plenty of bear sign in and around the camping areas.  In spite of the bear presence, there was no provision for the safe storage of food and smellables like toothpaste and brushes. 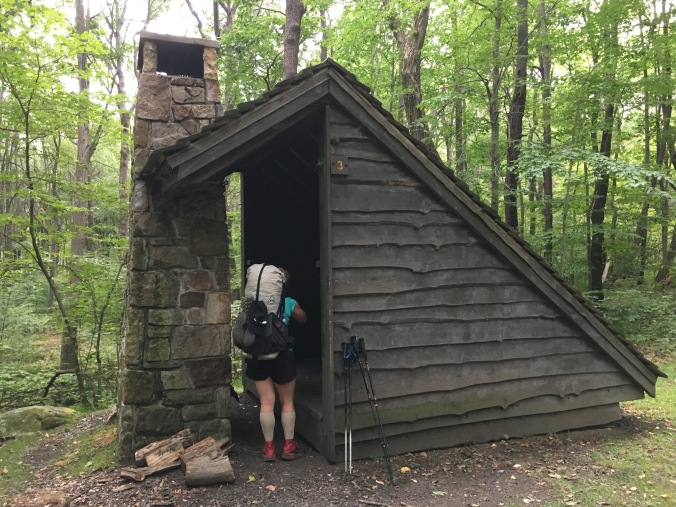 The shelters are Adirondack style featuring a fireplace and prestacked wood.  Hikers must have a reservation and pay $15 for a shelter and $10 for a tent pad. When you reserve a shelter, it’s yours alone.

Although the shelters are advertised to sleep five, four would be a more practical number.  They are well-maintained and clean.  In fact, we saw no trash in camp or on the trail and a tiny bit of graffiti in only one place. I wonder if there is a lesson for the AT in this somewhere… 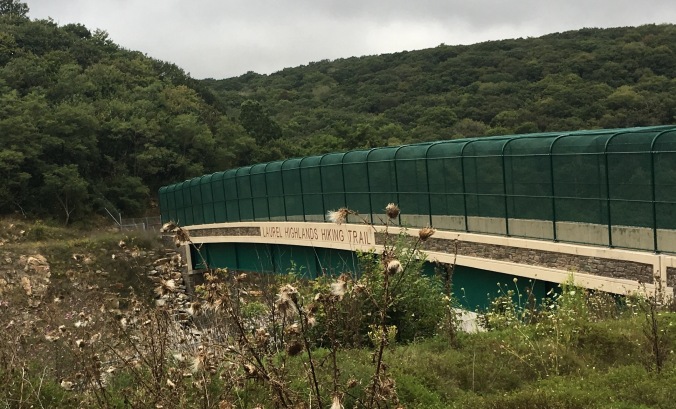 The trail crosses several highways and forest roads.  This well-branded bridge spans I-70.

This hike is easily done in five days.  However for those hiking from shelter to shelter (six to eight miles/day) and might need to resupply, there is a market just past the Seven Springs ski area, one tenth off the trail, featuring groceries and good eats.  You also can buy a snowboard next door if desired.

So there we were, off to a late morning start with about seven miles to march from the parking lot to the first camp.  We rolled into camp late in the afternoon and took our time.  The weather was mild and humid the first day with the humidity reducing until the final day.  In other words, perfect hiking weather. 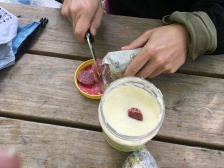 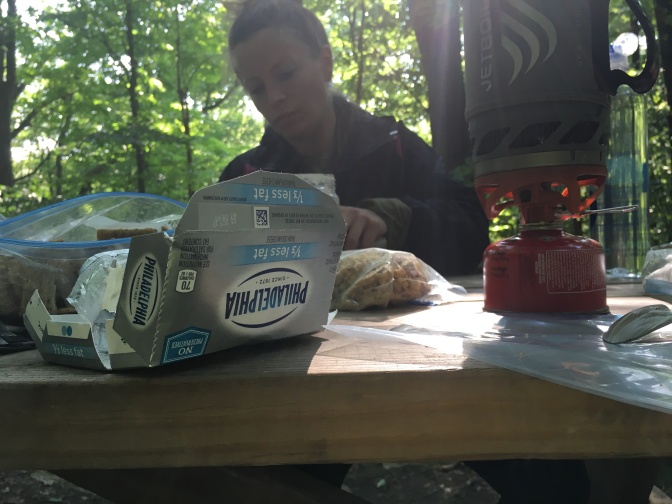 In spite of her love for hot coffee in the morning, Chrissy didn’t carry a stove. So I gifted her a cup of hot water each morning.  That’s what a good partner is supposed to do, right?

She cooked “cold” as we say on the trail.  Here she’s chunking summer sausage into her instant potatoes.

I fell in love with cream cheese and Triscuits in Massachusetts this spring. Great appetizer.  I also made ramen al fredo with the leftovers the next night.  A block of sharp cheddar and a summer sausage were lurking in my food bag waiting to be eaten a couple of days later with the remaining Triscuits. 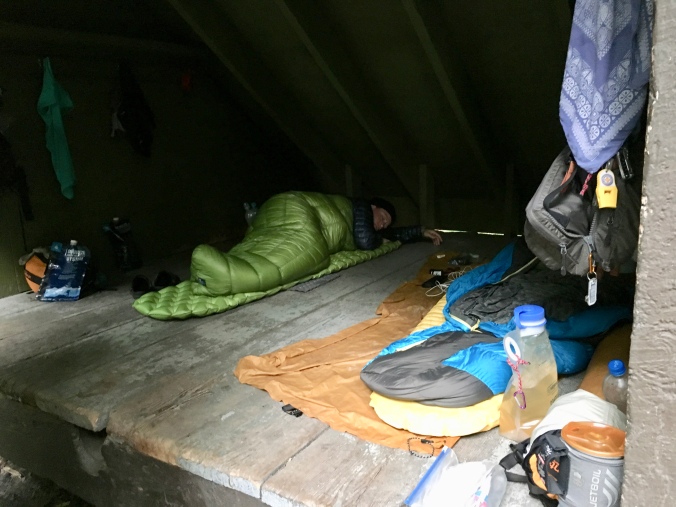 No sleepyhead in this picture.  I just woke up extra early.

Next night.  About the same time.  Chrissy:  “Hey!  I think I heard a bear.”  Me:  “Then let’s go chase it away.  There’s no reason to wait until it comes in the shelter.  Remember, bears eyes reflect red; cub eyes reflect blue.”  We get up and shine our headlamps around.  Nada.  Me: “Let’s go back to sleep.” 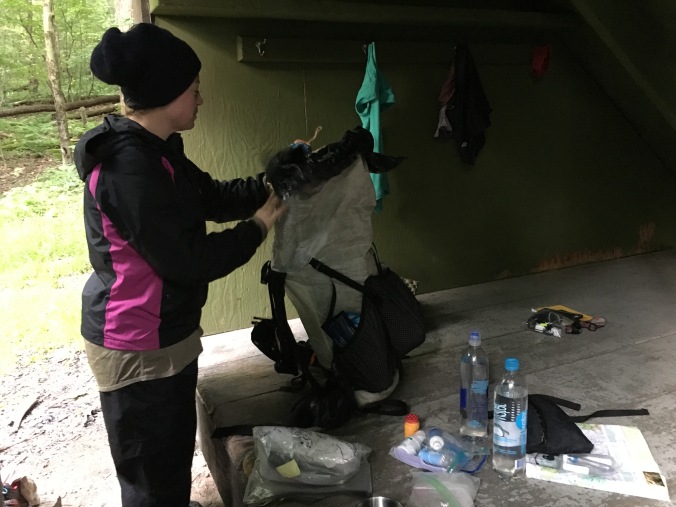 Packing up.  The mornings were cool and pleasant. 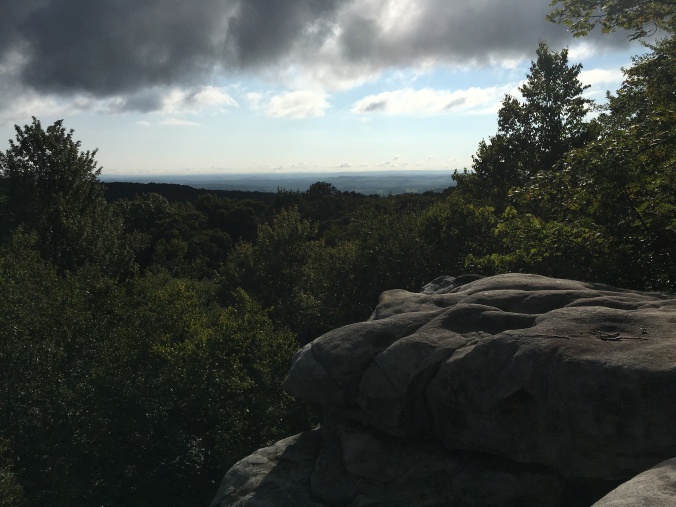 Rain threatened a couple of times, but we dodged the bullets.  However, we did get wet about an hour before we finished on the last day.  Fortunately there was a dry car awaiting in the parking lot. 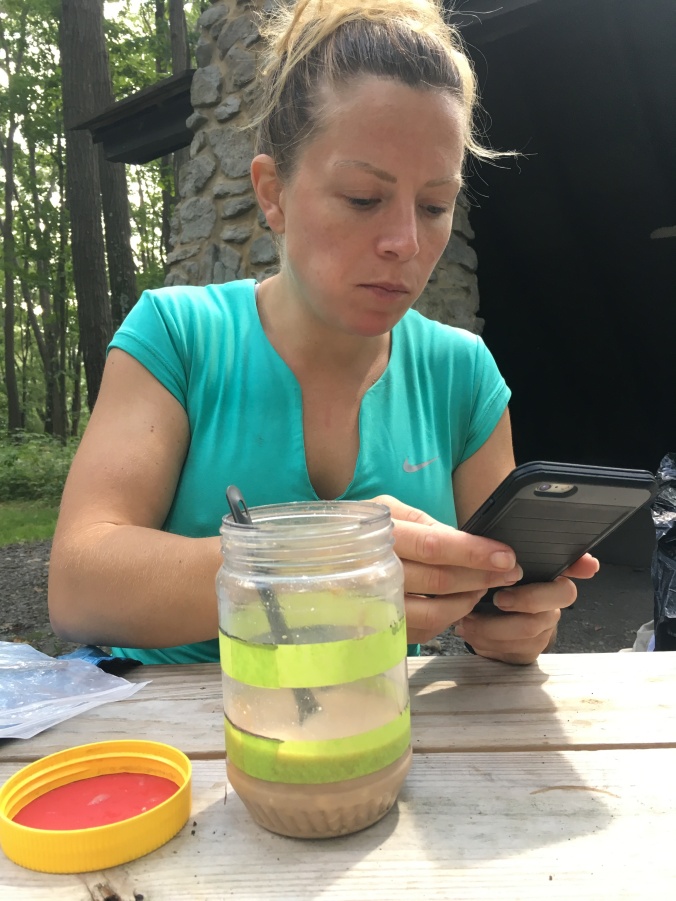 A Millennial and her phone.  She used old peanut butter jars marked by the cup for food prep. Her family has a long history with the Pennsylvania state forest service, they passed along the expertise, so she is not only a hiking machine, she’s a backcountry expert too. 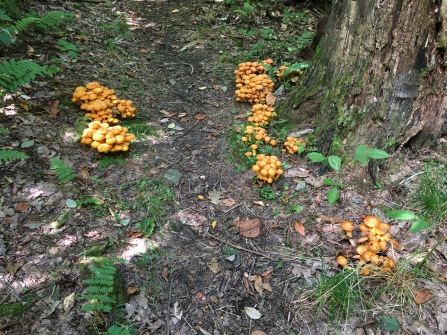 Fungi were everywhere, especially chicken of the woods.  Never saw so much of it in such excellent condition.  We did not take and eat any of it.

Signing a trail register.  We only found two of them.  Each was along the trail toward the north end. None was in the camping areas. 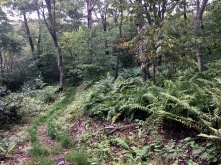 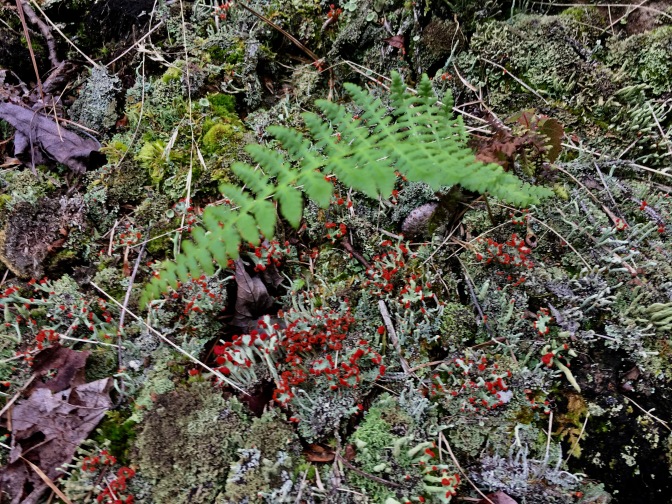 The trail has interesting rock mazes, not gratuitous additions like most of them on the AT.  Fall is quickly approaching.  The Black Gum trees are turning.  Even the lichen are blooming. 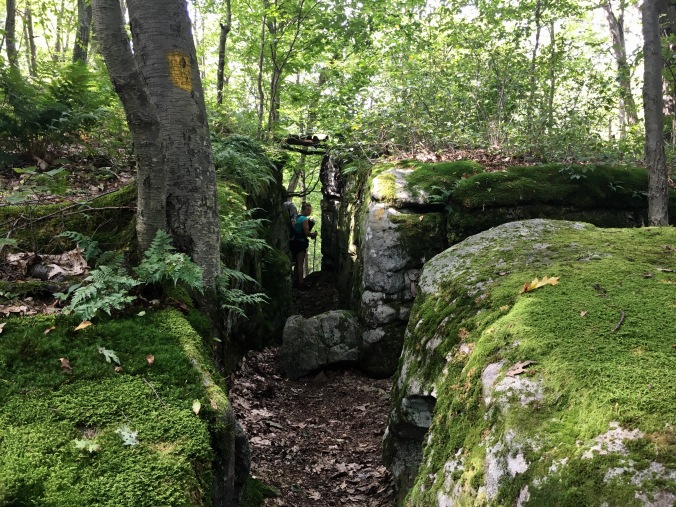 Note the stumbling block in the beginning. 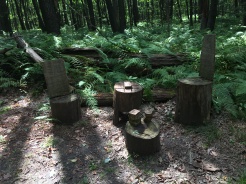 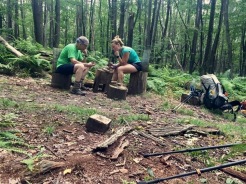 Some whimsical sawyer carved a tic tack toe table and chairs so we stopped to play a game. 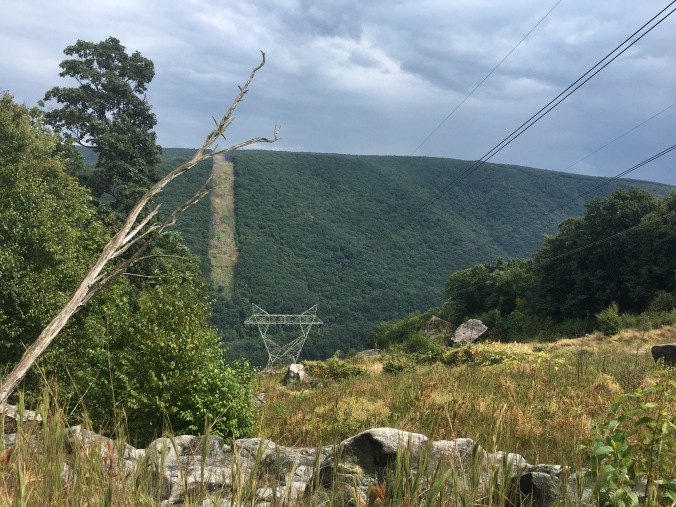 A fair number of power and pipe lines cross this trail as they do on the AT.  The fracking boom has led to 17 new gas pipelines being planned for the AT.  Realistically, they can’t all be stopped or rerouted though they’ll all be opposed.