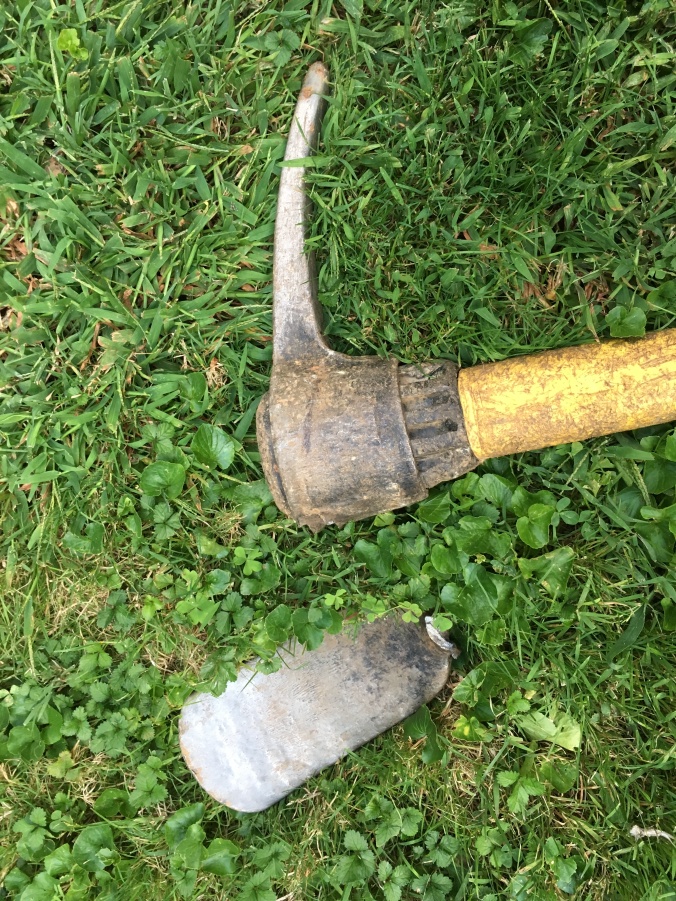 Why we can’t have nice toys.  Jim breaks them all.  Truth is that if you pound on rocks long enough, something like this is bound to happen.  It’s not my superhuman strength though. These pick-mattocks are cast, not forged, and we found crystalline metal at the joint where the tool broke. Manufacturer’s defect.

Trail Maintenance Workshop, Shenandoah National Park, September 15 – 17, 2017 — Each September the North District Hoodlums trail crew sponsors a maintenance workshop where up to 30 enthusiasts can come to work with the National Park Service to learn or improve their trail maintenance skills.  This was the 30th anniversary of this popular event.

The group divides into work parties – those new to trail work and those more advanced.  The projects tackled are agreed upon between the park service and relevant Potomac Appalachian Trail Club (PATC) district managers.

An early arrival on Friday made time for me to inspect the section of the AT which I maintain as the overseer.  I met a backcountry ranger on patrol at the trailhead so we hiked up Compton Peak together.  My pruning saw easily dispatched some tree branches we found blocking the trail.  There were no additional anomalies other than the spring is nearly dry.

Checking for bears is my favorite part of fall.  This time of year bears have entered hyperphasia, a metabolic condition that drives them to pack on the extra pounds they need to survive winter.  These obsessive eating machines can devour 20,000 calories per day.

Black bears are omnivores.  The mast (bear food) consists mostly of nuts – acorns, hickory and walnuts in the park, plus insects they find in rotting wood, berries, cherries and apples that come from residual orchards originally planted by those who farmed the land before it became a park.  If they find a animal carcass, they’ll scarf up that too. We spotted five bears while working Sunday morning. 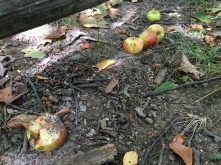 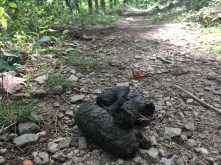 Here a bear brought some apples from the nearby orchard and dropped them next to some rotting logs that offered more calories in the form of grubs and other insects.  Note one apple is half eaten.  The scat pile is perhaps the largest I’ve seen in the area – about three times the volume of a large dog.  Note the absence of seeds in the scat which is unusual. (Click on any photo to enlarge.)

When the inspection was finished, I headed for Mathew’s Arm campground where the workshop encamped.  Folks had begun to gather and it didn’t take long for beer and a fire to improve the ambiance.

On Friday through Saturday lunch we are responsible for our own meals.  This is steak a la foil, with potatoes, carrots, garlic and red onions, slowly baked in the coals.  The scrumptious Saturday dinner, Sunday breakfast and lunch are catered (prepared on site) by two brothers whose other brother is a Hoodlum.  This was their 13th year as I recall.

The first order of business Saturday morning is the safety briefing followed by work party assignments and discussion.  Those new to trail work begin with an introduction to the tools maintainers use and the purpose of each followed by a day-and-a-half’s worth of hands-on application.  They clip, prune and weed vegetation, clean and repair erosion control structures, and even build a few.  The work parties headed out to north Marshall, Little Hogback, Dickey Ridge and Overall Run. 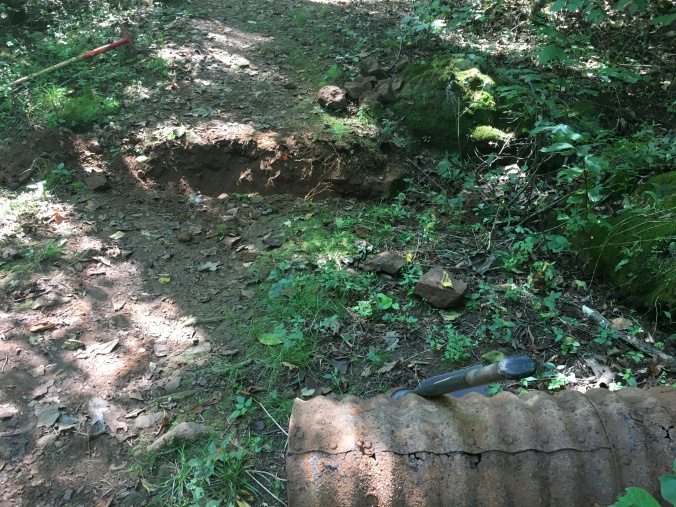 We worked with a couple of NPS crew members to remove and replace some rusted culverts on the lower Dickey Ridge trail near the park entrance station.  We also cleaned and rehabbed some waterbars in the area. 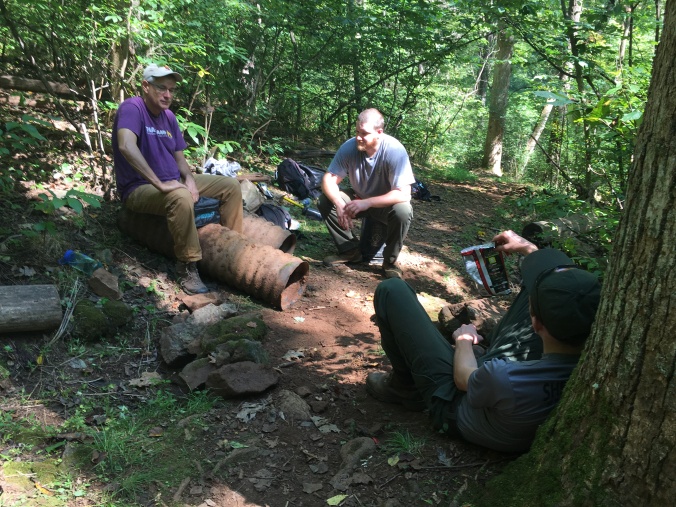 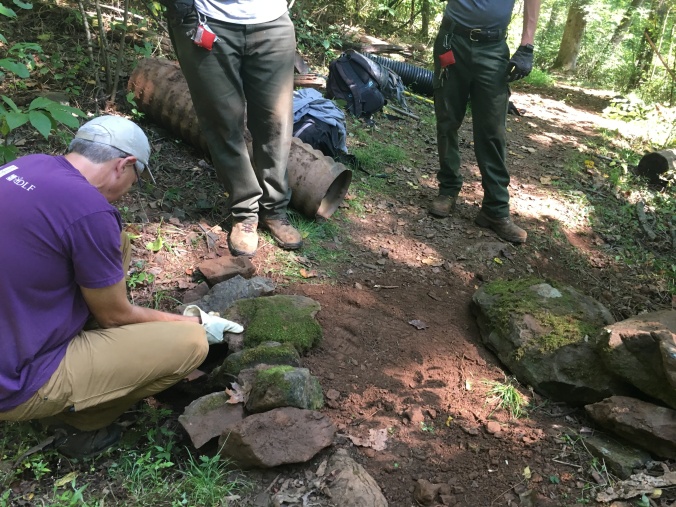 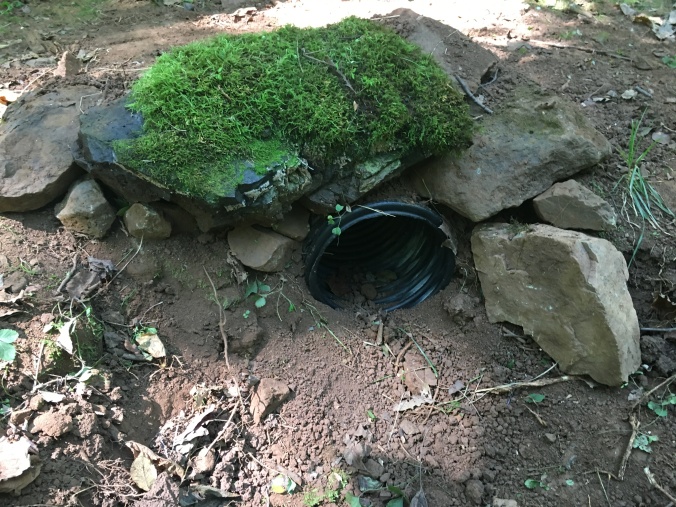 On Sunday our work party cleaned and rebuilt waterbars and check dams on the Overall Run/Tuscarora trail.

Turning in tools at the maintenance yard near Piney River.

Corn snake on the hunt for bats that live in the rafters. Who said snakes stay on the ground?  They can climb trees and stone walls, not to mention chimney up this space. 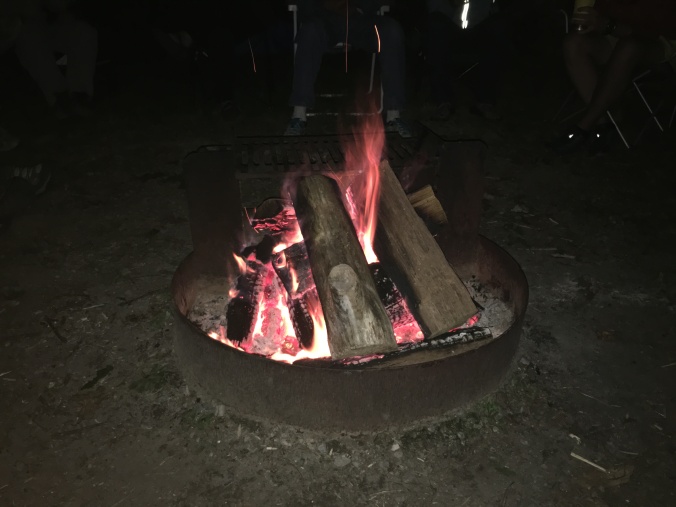 The 30th year for an event like this is auspicious.  The experience and the companionship were delightful.  Most importantly, much needed work got done.

If you are so inclined next year, watch for the announcement in the PATC newsletter.  Be early, the roster is limited to 30 and fills up fast.

One thought on “Broken Pick”