The Appalachian Trail is in there somewhere.

Shenandoah National Park, South District, March 19, 2019 — If readers recall, last November we tried to clean up massive ice storm damage caused by a storm that hit the park’s south district especially hard.  I wrote about it at this link:  Storm Clean Up I

Over the winter we tried several times to get back in to finish the job.  We were thwarted time and again by more winter storms, that is until now.

Yesterday sawyers and swampers gathered at the Swift Run Gap entrance and the entrance at Rockfish Gap.  We worked from the gaps toward the center.  We had 27 miles to clear.

Meanwhile the park was hit by several more storms.  Eventually the entirety of Skyline Drive, the road through the center of the park, was closed.  Today only the central district is open, though the north district, where the North District Hoodlums trail crew worked Saturday, should be open soon.

Did I mention we encountered a thru hiker who said he was with two others?  Gotta hurry.  Park tourist facilities are scheduled to begin opening March 31 and the thru hiker vanguard is here.

The crew at Swift Run divided the territory into discrete chunks. Each was relatively small not knowing how much damage we might find.  We split into sawyer/swamper teams to have at it.  The damage reports varied from tediously whacking through downed limbs and tree crowns to bucking large 30-inch trunks.  Some work parties were done in four hours, one encountered so much that it was unable to finish all of it’s work.

A lot of the south district looks like it has been topped by a giant weed whacker.  Here we are looking at Powell Gap. 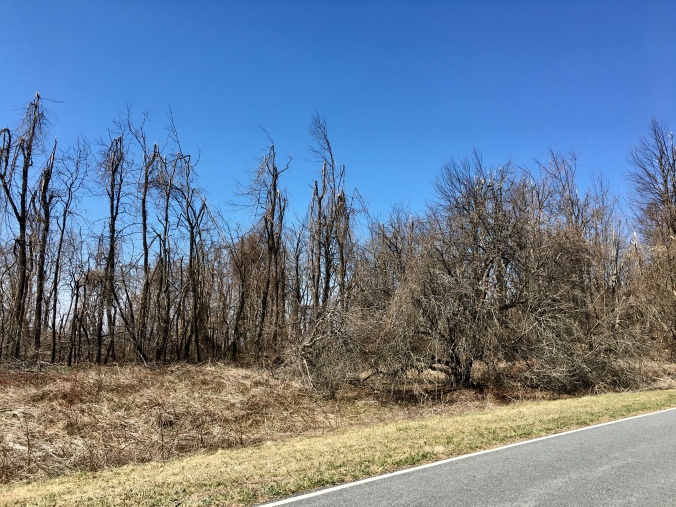 Another view at Powell Gap. 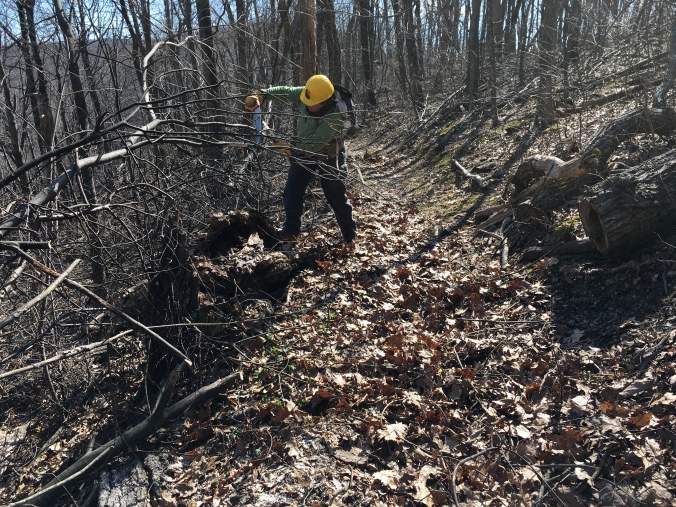 My partner Jane and I got after it.  We were responsible for 3.1 miles from the Doyle’s River overlook to Dundo campground and picnic area.

It took two hours to cover the first half mile.  Dozens of tangles blocked the trail.  They are a pain to clear with much of the work best done with a pruning saw. 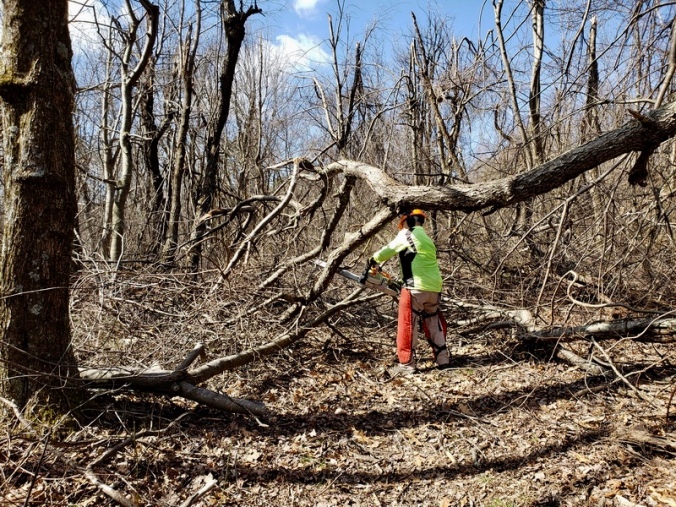 The first mile was the most difficult and featured about 80 percent of the work.  After Brown Gap (middle) we found little to do.  It was literally a walk in the park albeit sharing a hunk of dead-weight metal we traded as we schlepped along.

Just before we turned up the trail that connects the AT to Dundo, we found this poor fallen white blaze*.  It stood its ground and fought the good fight, but in the end our brave trail marker just couldn’t overcome the odds. The storm had taken its final casualty.  RIP.

*As with all artifacts found in the park, we left this one where we found it.

9 thoughts on “Storm Clean Up II”