Appalachian Trail, Maryland and Northern Virginia, May 20-24, 2019 — Usually the trail is an undramatic place.  Hikers come and go.  Some even dig cat holes to go in.

This week opened uneventfully and hopeful of good times to come.  I met the short-season Maryland ridgerunner at the Greenbriar State Park visitor center where the rangers with whom we work have their offices.  Bucky was issued his radio, parking permit, apartment key and other such stuff. 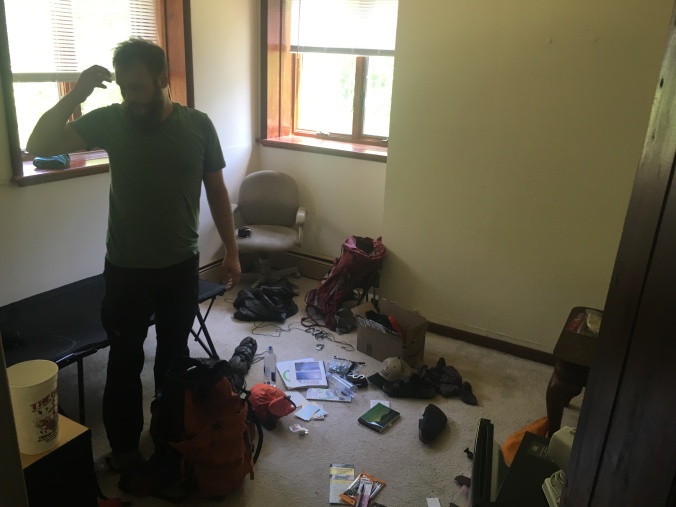 Bucky’s room.  Packs explode when you open them.

We met Mary, his ridgerunner partner, at the apartment.  We drove around pointing out landmarks and key areas.  Then we adjourned to Dan’s Tap House for juicy gourmet burgers before bounding up the mountain to Annapolis Rock where Bucky will spend his first shift as caretaker.  Mary will be patrolling in Maryland.

The sundown faded toward black as Bucky and I arrived at Annapolis Rock.  As the last of the sunset peepers were sliding down the hill towards home, we stowed our gear and made the rounds.  We found only one camper, a thru hiker.  He actually properly hung his food bag on the bear pole.  Score!  After securing the sagging tarp over the picnic table, we called it a day and dove head first into our respective dream worlds.

We woke to the thunderous snoring of Jake brakes and the throbbing pulse of commerce rushing along I-70.  The interstate is invisible from the view point, tucked in behind a low ridge.  When the wind is quiet, its presence is as undeniable as is the drag strip across the valley.

With the crack of dawn piercing the tent walls, we raked the sand out of our eyes and adjourned to the ridgerunner office/picnic table for breakfast.  Two packs of instant oatmeal and a Jet Boil coffee later, it was time to inspect the rock.

Following orientation, we hiked to the Pogo campsite about two miles up the trail.  First we stopped at the Black Rock overlook and scoured the area for trash.

The desecration of Black Rock and other places is a pastime for local high school kids.  I’m certain Shawna wasn’t present when the perp misogynistically memorialized his conquest.

The good news is that it didn’t last long.  Mary followed up the next day with a bottle of Elephant Snot and a scrub brush.  Bingo.  Like it never happened. 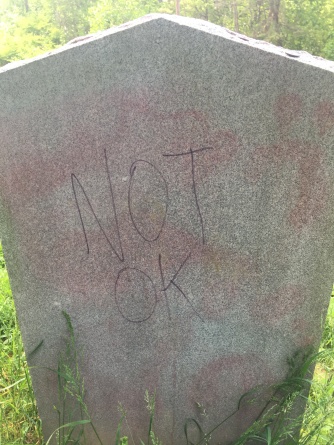 We also checked out Fox Gap where a Civil War skirmish was fought.  New graffiti topped the old. 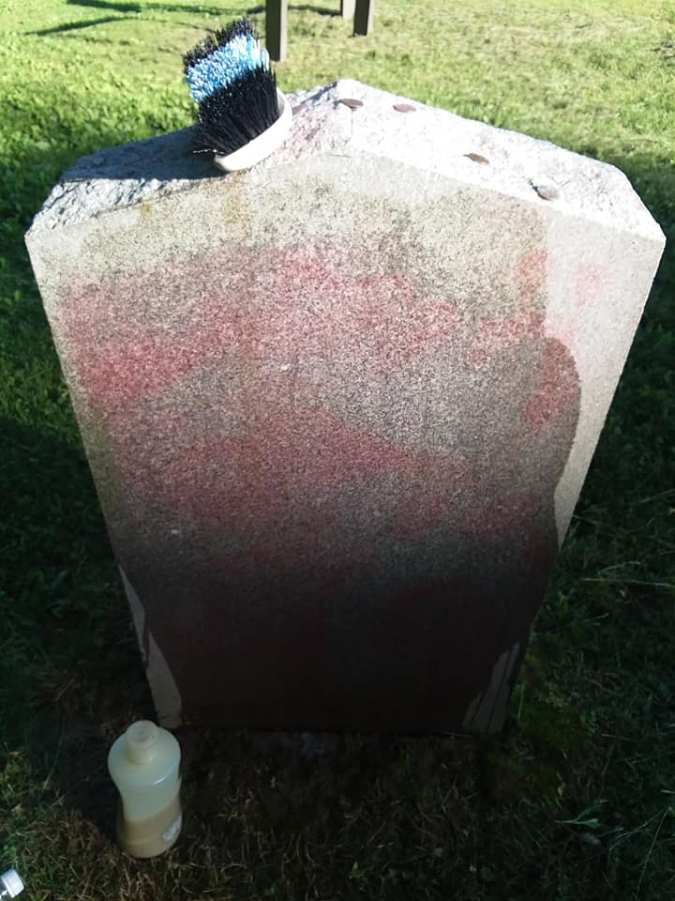 Once again, Mary and her trusty Elephant Snot to the rescue.  (Learn more about Elephant Snot here.)  All in a day’s work for a ridgerunner, right?

Now it’s time to interrupt this friendly story for a  brief trip to the dark side.

This hiking season has already been marred by a tragic event.  One hiker was murdered and another maimed and nearly killed when someone who was deranged stabbed them.  Click here for details: (How safe is the Appalachian Trail).

The AT attracts 3 million visitors annually.  They represent a cross section of society with all that entails.  Normally hikers are pretty mellow, but this tragedy elevated concern within the hiking community, especially for unbalanced and misogynistic behavior which was reportedly exhibited by the accused killer.

Earlier in the day, a hiker complained to us about another hiker variously called “Yogi Beer,” “Renegade,” or “Air Quotes.”  Bad actors often change their trail names to avoid authorities.  Judging from reports of his behavior, Yogi Beer appears to be a raging alcoholic and possibly bipolar.  He had been aggressively harassing women.

With this in mind, Bucky and I were enjoying the brilliant weather while hiking to the trailhead — Bucky to pick up a bale of wood chips for the Annapolis Rock composting privies and me to my car so I could meet the Northern Virginia ridgerunner for his orientation hike the next day.

Three hikers stopped us to complain about a guy called, you guessed it:  Yogi Beer.  They had first-hand knowledge.  One of them had been concerned enough to snap Yogi Beer’s photo.  We immediately filed an incident report and shared the photo with law enforcement rangers, trail officials and the other ridgerunners.  (Details not shared here to protect the innocent because some of it may be hearsay.) With that, we thought we were done with the dark side.

In the interest of chronology, let’s put the dark side on hold for a minute because we’re not done.  It will be right back after a bit more of our friendly story. 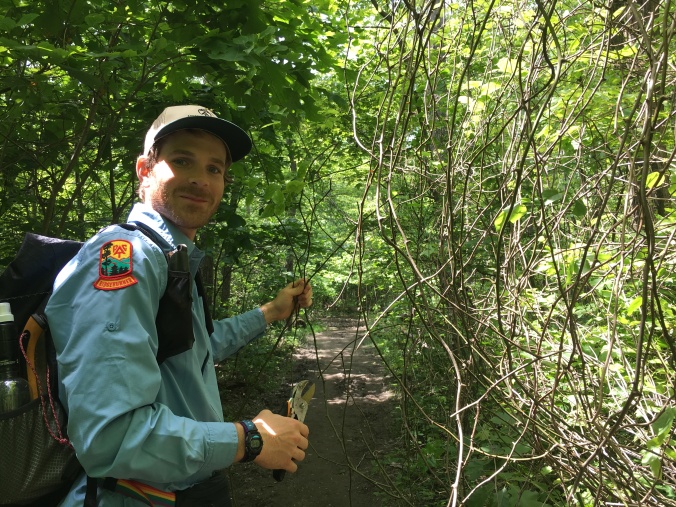 Each of our ridgerunners is an expert backpacker.  Occasionally a resume stands out.  Witt has thru-hiked the triple crown – Appalachian Trail, Continental Divide Trail and Pacific Crest Trail.  He also as held the FKT (fastest known time) for the Arizona Trail and is the FKT holder in Maine’s 100-mile Wilderness.  ( Info on the National Scenic Trails System)

Unfortunately for Witt, ridgerunners are more commonly evaluated by the number of contacts they make and the amount of trash they pick up.  That’s slow going for a guy who’s used to moving in the fast lane.

Along the way we noticed an unusual arrow made of sticks pointing to a path in the woods.

Somebody wants us to follow the yellow brick road, right?  Naturally we did.

About 100 yards in we discovered a sign for a hiker hostel.  Unfortunately it’s on National Park Service land, about 20 feet inside the boundary according to the marked trees.  We informed the folks who deal with these issues.  The owner only has to move it off park service property and it’s good.  Commercial ads/promotion isn’t allowed on federal land.

Stacking rocks has been a thing for awhile.  Cairns and rock art are inconsistent with Leave No Trace principles.  In short:  Leave only foot prints (not rock stacks, painted rocks or graffiti) and take only photos (not flowers, feathers and antlers). Leave those for others to see. 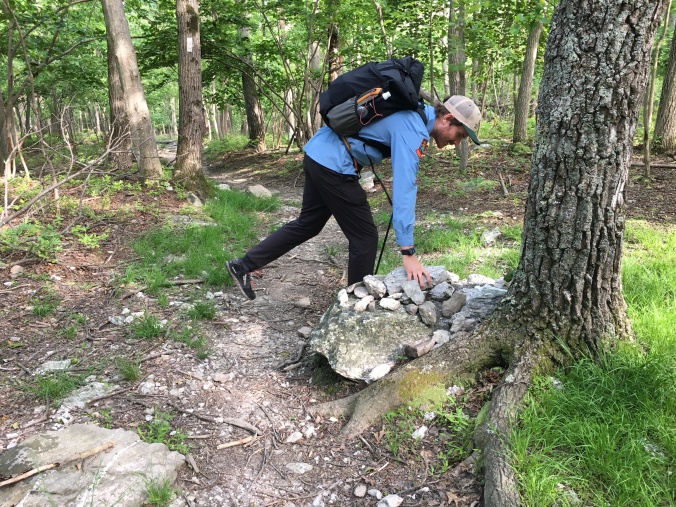 Boom.  The rocks were widely scattered. 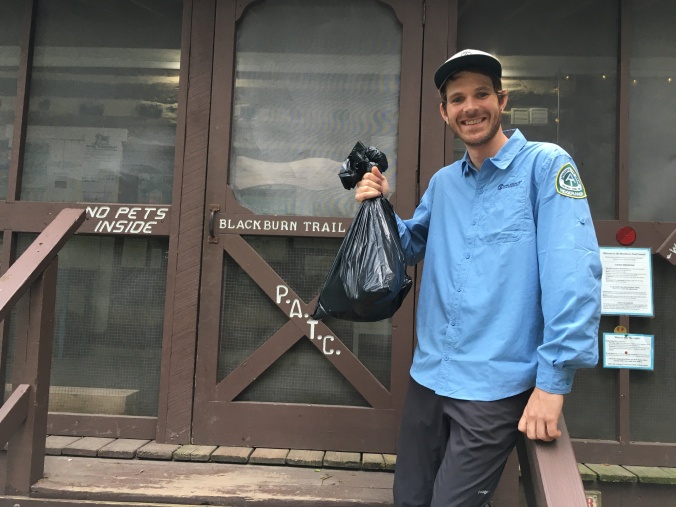 We hiked 12 miles.  The trash collected was moderate.  Best highlight:  We opened the tool cache at David Lessor shelter.  We immediately noticed a field mouse.  A second later a juvenile Black Snake became obvious.  We left mother nature to her business.  If they could get in, they could get out.

Now we’ll return to the dark side. When we left we were dealing with Yogi Beer.

Turns out Witt and I may have passed a hiker who turned up in an incident report for threats and sexual harassment.  His photo was familiar.  Not long after learning that, a report came in about an abusive hiker at a nearby hostel.

Believe me.  This volume is highly unusual.  Unfortunately, there’s more!

So, there I was at home in my favorite chair, quietly sipping coffee while reading the New York Times early Saturday morning. The phone rings.  It’s Mary at the Ed Garvey shelter in Maryland. 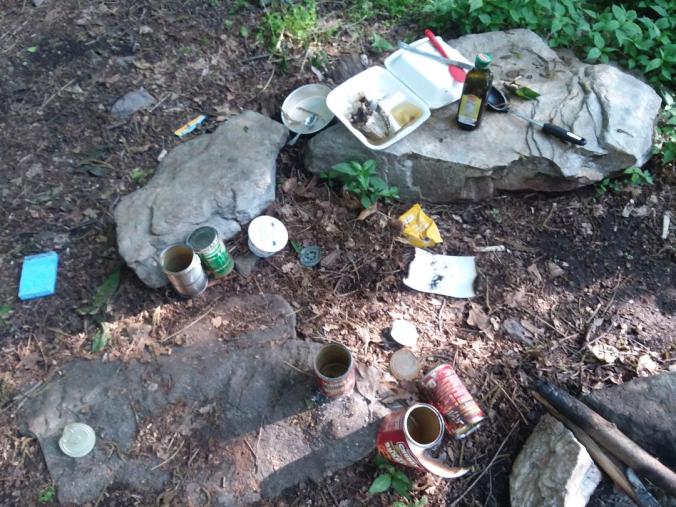 She’s found a mess.  The guy in the tent won’t get up.  He doesn’t appear to be under the influence.  She wants to educate him to pack out his trash, not to mention properly hanging his food and not to make the mess in the first place. 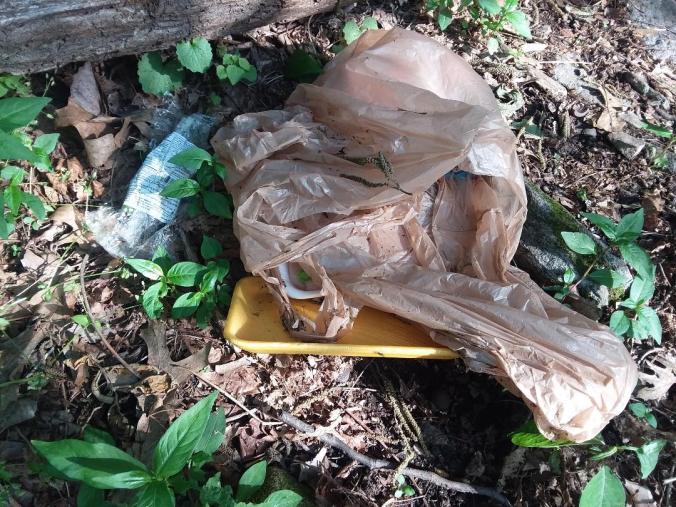 Raw chicken is in the mix.  This could attract animals including bears.  Then we’re dealing with a different problem.

Since the camper rolled over and would not get up, she moved a distance away to observe, radioed the Maryland Park Service and waited for the ranger.  Before the ranger could arrive, the guy packed up and left.  She cleaned up the area.

Of note.  Sexual harassment on the trail isn’t a universal experience, but its frequency is way too high.  Sometimes it’s subtle as when one of our women ridgerunners quipped that all she needed was another septuagenarian man-splaining how she should hike.  Other times males go out of their way to tell women they don’t belong on the trail alone or they aren’t strong enough to hike long distances.  Sometimes it’s much more sexually suggestive or worse as when someone attempted to rape a hiker I know.

This is shameful.  Men need to step up and stop this behavior.  We need to own it and step in when we see or hear it.

7 thoughts on “An Ugly Start to the Summer”