Butterfly on short final for thistle pollen.  They have been abundant this year.

The five-day experience couples the satisfaction of teamwork and hard work with the joys of barracks-style living – nine people sharing a single bathroom and rush-hour-like  kitchen congestion.

On the way to our work base in the park’s Pinnacles area, I stopped at my AT section at Jenkins Gap to refresh a flaky blaze.

First you need exterior grade white paint, a brush and a scraper. 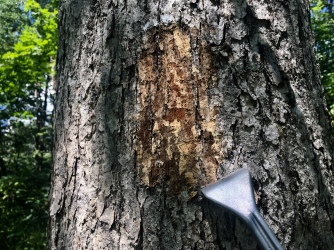 Next you remove the old paint and just enough bark to help the paint stick.

Andy Warhol would be proud (I hope). 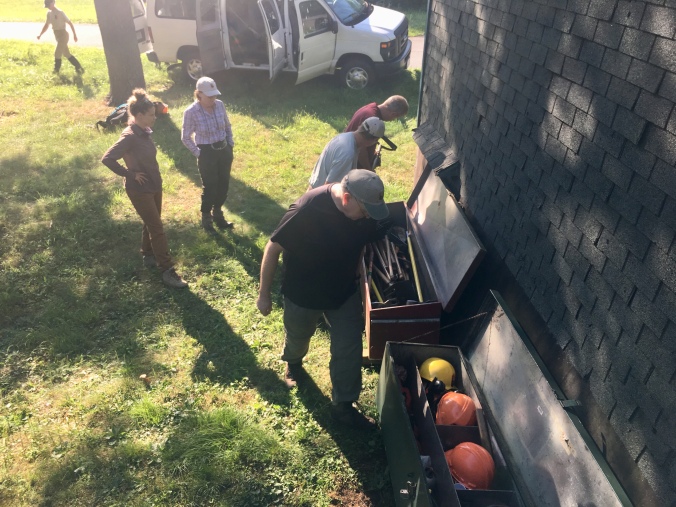 Raiding the tool cache for tools needed for the the week.

Monday we split up for a range of jobs.  Mine was on a “weeding” crew for an overseer who has been ill.

It’s hot, sweaty and buggy work, all necessary to remove habitat for the ticks that cause Lyme disease.

Day two dawned with the full brutality of mid-Atlantic summer heat and humidity.  It was so hot that the burning crosscut kerf spit fire and brimstone.

We teamed up to rip our way through this 18-inch blowdown.  It’s in a federally designated wilderness near the park’s western boundary.  By definition, power tools cannot be used for trail work in wilderness areas, hence the muscle power. 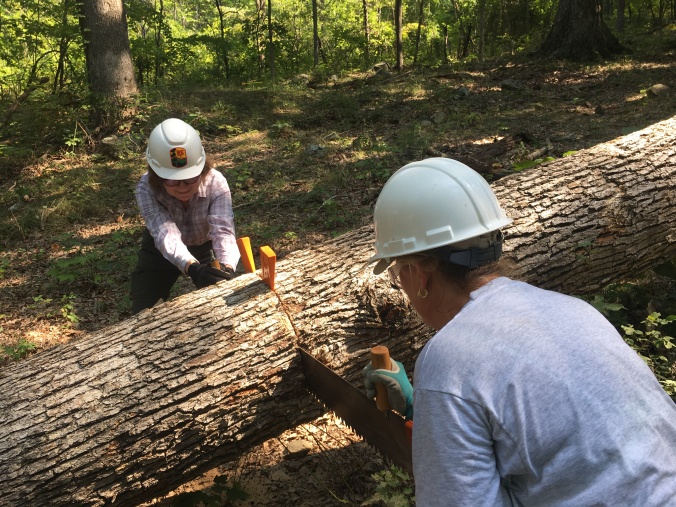 The guys had several bites at the apple too. 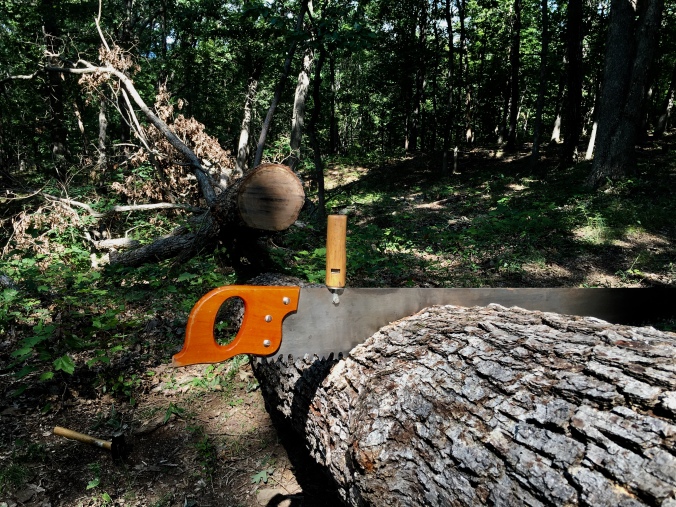 Half done, but the heat index was oppressive.  We were working at least 1,500 feet lower than the ridge above us where the temp would have been 10 – 15 degrees cooler. 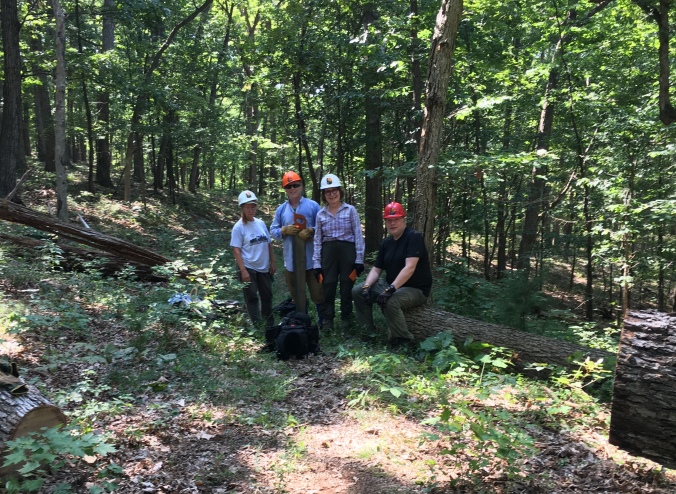 Shortly after we snapped this victory photograph, one of our members showed symptoms of heat exhaustion.

In this case the symptoms were: dizziness, dark urine, fatigue, transient nausea, vision issues and lack of coordination. Skin was cool and normal color, but she wasn’t sweating much.  Heart rate and breathing remained within a normal range under the conditions.  Her awareness and alertness (A/O) score remained at 3 for the entire time. 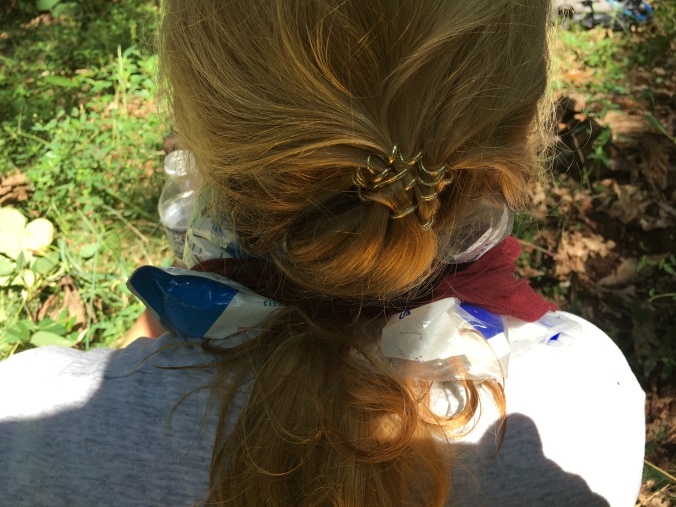 Treatment included moving the patient into the shade, soaking her with water, placing chemical cold packs against her carotid arteries, taking her vital signs, and ultimately getting her to sip a liter of Pedialyte.  In total she drank 2.5 liters of Pedialyte and water.

We radioed Shenandoah dispatch about 15 minutes after the onset of symptoms for a backcountry EMT.  Her symptoms were worsening.

We knew it would be awhile.  The plan was to continue treatment until the EMTs could arrive or, if she improved sufficiently, to walk her out over the mile-and-a-half down hill to the trailhead.

Unfortunately emergencies in the backcountry are never trivial.  Help can’t arrive easily or quickly.  We coach our ridgerunners to prepare to be on scene without help for up to three hours in a worse case scenario.  Depending on the nature of the injury, that’s a lot of time for bad things to happen.

After an hour, our patient improved and felt strong enough to attempt to walk out.

The EMTs were still on the way, so we radioed dispatch that we were walking out.  We met the EMTs and park rangers at the trail head where they were preparing to hike in with the guide we had sent ahead.

Our patient was assessed and monitored for almost an hour before being discharged to our care.

A law enforcement ranger who responded paid our team the ultimate compliment.  “It was,” he observed, “nice to see people in the backcountry who were properly prepared.”

The next day’s weather forecast was for molten metal falling from the sky, so we decided to take a zero day which would allow us to slip behind the public access curtain to see what we could learn. Our thanks to Rebecca Unruh, the ranger who coordinates our volunteer activities.

The park archives are an amazing collection of records and artifacts dating back before the park’s creation in the 1930s.

What’s in this box? 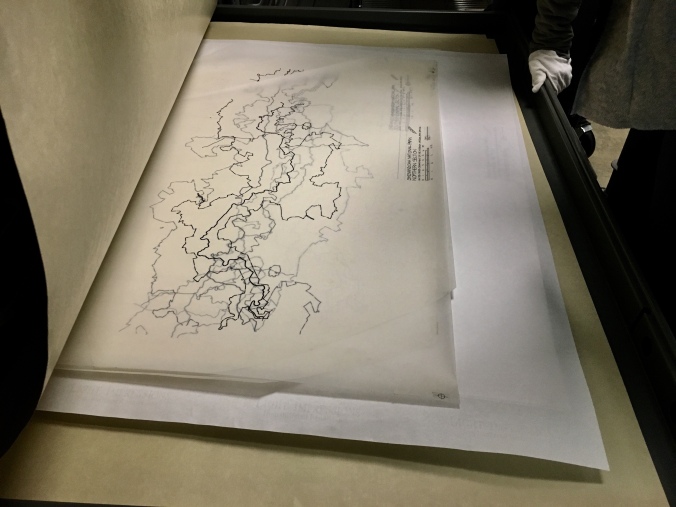 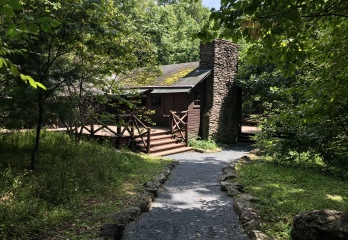 Next stop, Rapidan Camp. The camp was President Hoover’s country (very rustic) retreat.  It was the model for Camp David, the current presidential retreat, located about 150 miles north in Maryland’s Catoctin Mountain Park.

Our zero day ended on a Sundae.

Throughout the year we partner with the National Park Service rangers.  Dave Jenkins is responsible for trail maintenance in the northern half of the park.

Building a drainage dip for a wet spot.  We are shifting from hard-structure waterbars (drains made of wood and stone) to dirt mounds variously called swales, rolling grade dips, or as the trail maintenance manual (p. 65) calls them, “drainage dips.”  They are more natural and have less environmental impact. 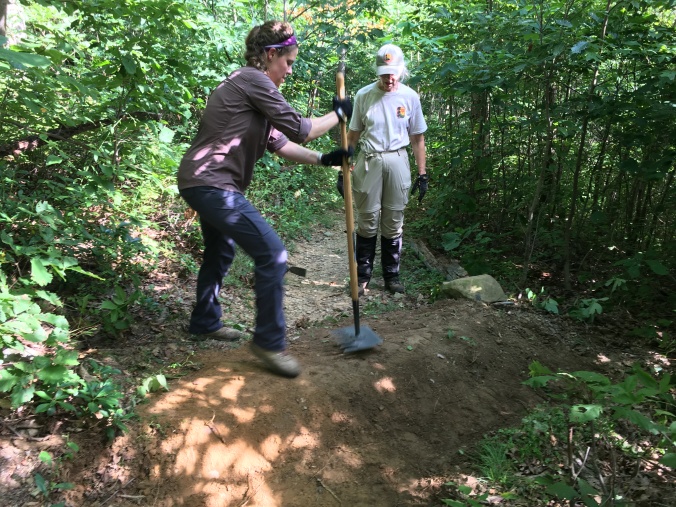 The dirt is raked down hill and hard tamped into a mound set at a 45 degree angle to the trail forming a ditch-like structure.

We also cleaned and repaired serviceable log and stone waterbars.

Some people pose with trophy animals.  We, on the other hand …

Closeout discussion with Ranger Rebecca Unruh at our barracks. 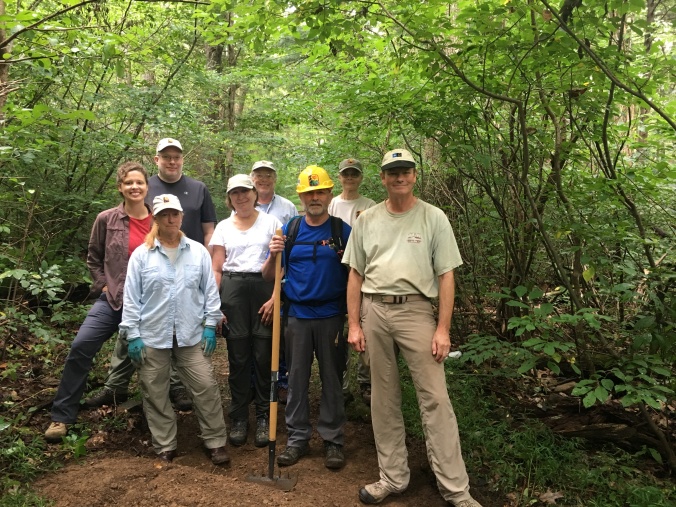 Final portrait.  One more crew week in the books.