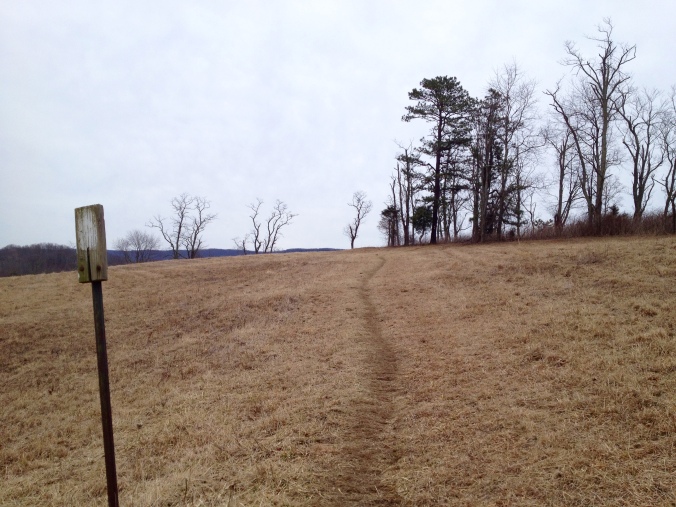 It feels like Mother Nature has put the entire country in time out.  We got sent home from school for bad behavior. We’re stuck in our rooms.  Justification: Failure to be good stewards of our lonely blue marble.  Maybe Mamma’s gettin’ even?

But like Biblical pestilence, famine, the sword, beasts, plague, and their friends, sometimes it feels like the four horsemen are thundering just over the horizon.  Other times we simply long for companionship.  The urge to invite family to dinner or gather with like-minded friends is overwhelming.

Then, there’s always wine.  And Zoom.  Because Amazon has run out of lamb’s blood.

Gather together.  Isn’t that what humans do in stressful times?  We are herd animals, like it or not. But, the herd is too big and the big dogs are making a cull. 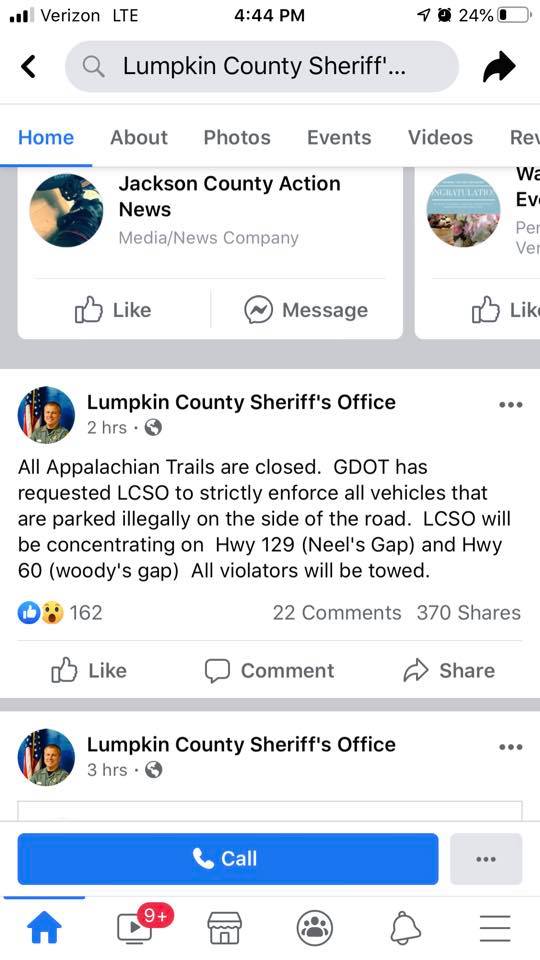 The overcrowding up and down the AT and in the National Parks that I reported last week exploded over the weekend.  Rocky Mountain, Sequoia, Kings Canyon, Yellowstone, Grand Teton, and The Great Smoky Mountains national parks are closed to the public for public health reasons. 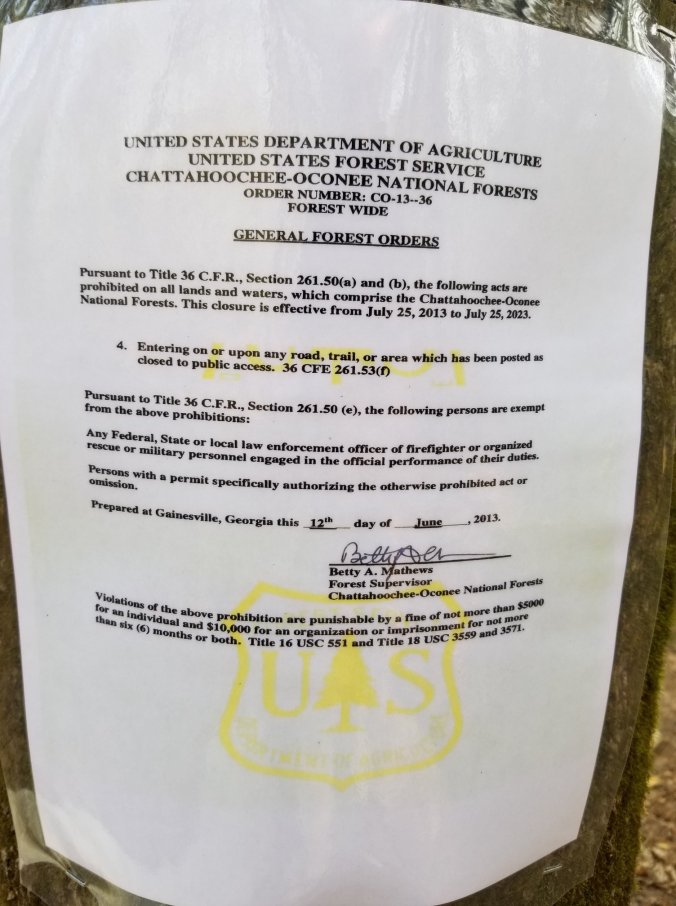 On the east coast, the Chattahoochee, George Washington and Jefferson National Forests are completely closed to visitors.  Too many people, people. 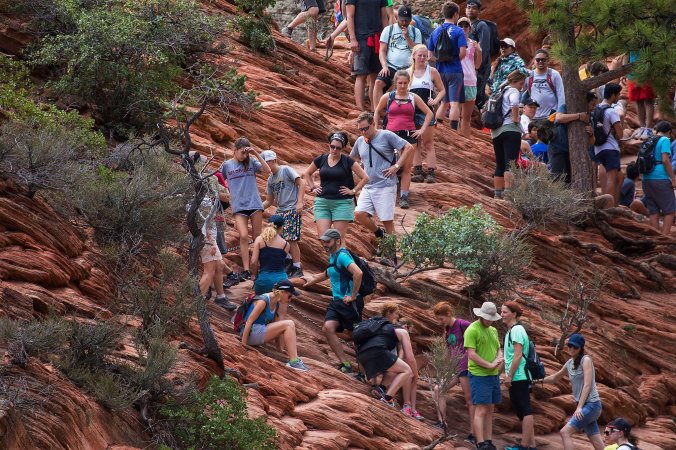 This illustrates the overcrowding out west.

A Maryland State Park Service ranger told me that they were “Slammed!”  over the weekend.  Twenty-one million people live within two hours of most Maryland parks.  Seems like a big bunch of them showed up.

It’s boring sitting at home.  Or is it, if you can’t maintain a safe distance between yourself and the next person?  And oh, by the way, please take your trash with you when you leave.

Dear Darwin Award candidates.  It won’t be boring in the ICU, that is if you can get a ticket.

There is an inverse ratio equation that may apply here:  FOMO is inversely proportional the closer you get to the ICU.

(Thanks for the concept Tom Toles, Washington Post editorial cartoonist.) 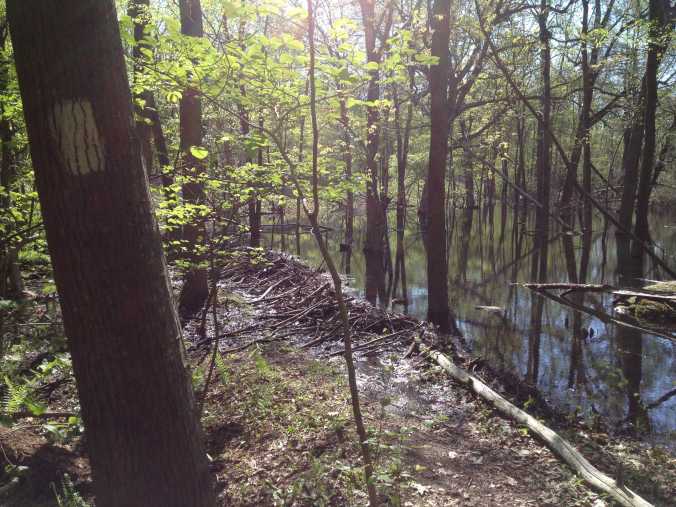 With the closures, the trails resemble a reverse scene out of Rachel Carson’s “Silent Spring.”

Absent were the humans.  The sound of their chatter.  The crunch of their boots.  The crinkle of their candy wrappers. The scraping of their potty trowels. The soft poof of their TP tulips making trash landings faded away. Only the chirping of chickadees and the buzz of the bees, harmonized with the rustling leaves and the beavers’ baseline to entertain the squirrels, the deer and the bears.

Please stay home.  This article explains why.  This is why. We had another conference call this week to reassess ridgerunners. 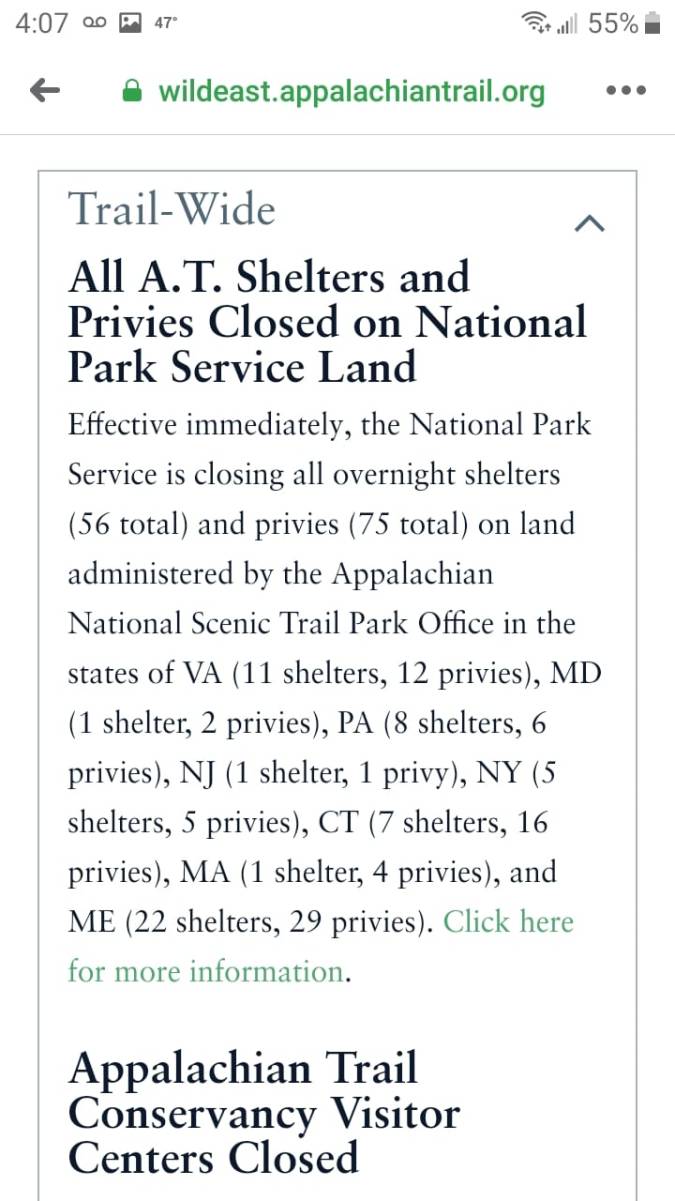 Each year our trail club hires six ridgerunners to patrol the 240 AT miles we maintain. The trail is, in effect, closed.  Accordingly, the club is supporting the land manager partners who still want ridgerunners. 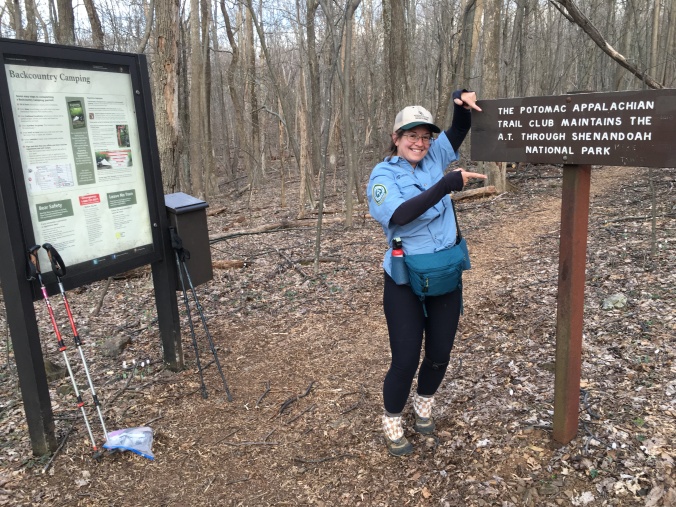 We’re now down to three ridgerunners – Shenandoah National Park, Northern Virginia and Maryland.  Shenandoah is delaying the start of all their seasonal employees until circumstances sort themselves out, April 30 at the earliest.

The nature of the COVID-19 virus will dictate profound changes to the normal ways ridgerunners function, not the least of which is maintaining social distance.

Until further notice, the ridgerunners will not enter shelters, tend privies or sleep in the back country.  Each has a discrete residence that they don’t share with anyone else.  Health insurance is provided this year as an extra precaution.

With the ridgerunner question settled, home sequestration isn’t the end of the world in my neighborhood.  If you can’t hike far away, you can hike near by. 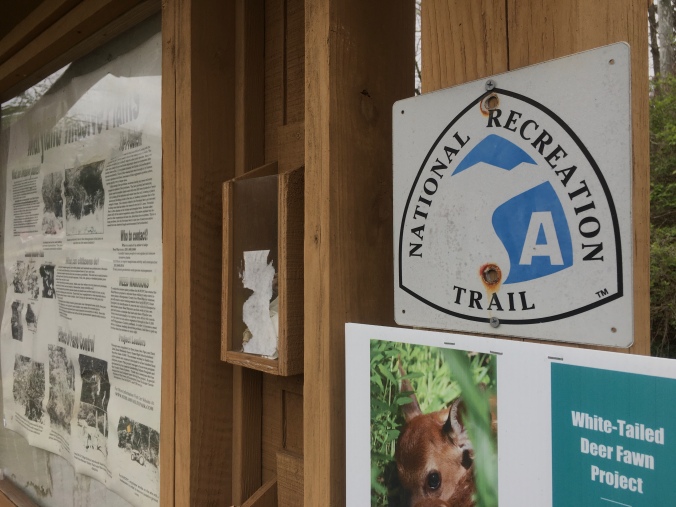 The 40-mile long Rock Creek Trail is a leafy block-and-a-half away. 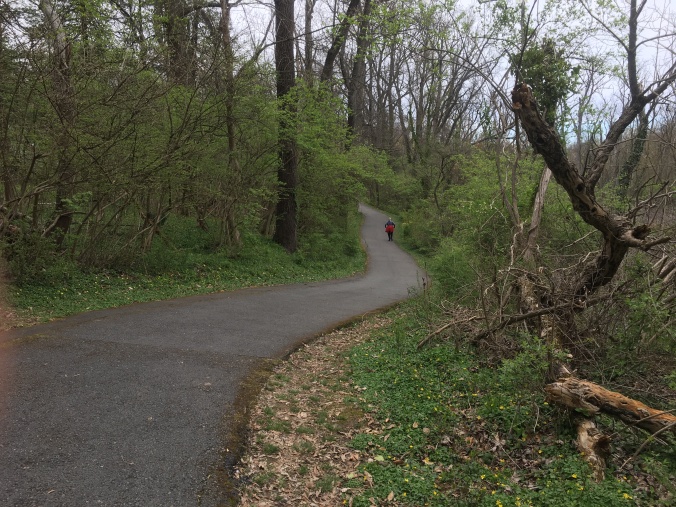 The walks are agreeable in spite of the urban location. 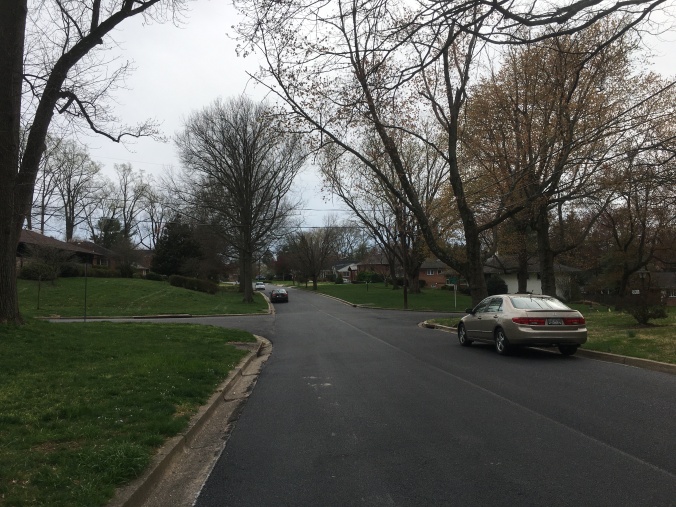 My neighborhood has plenty of pleasant walking. 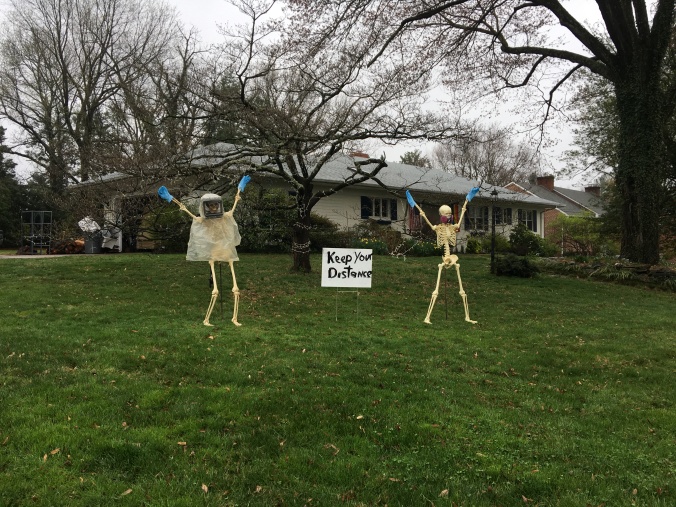 We are very situationally aware as a neighborhood.  This family always has a sense of humor – and Halloween decorations that can be amortized over additional use. 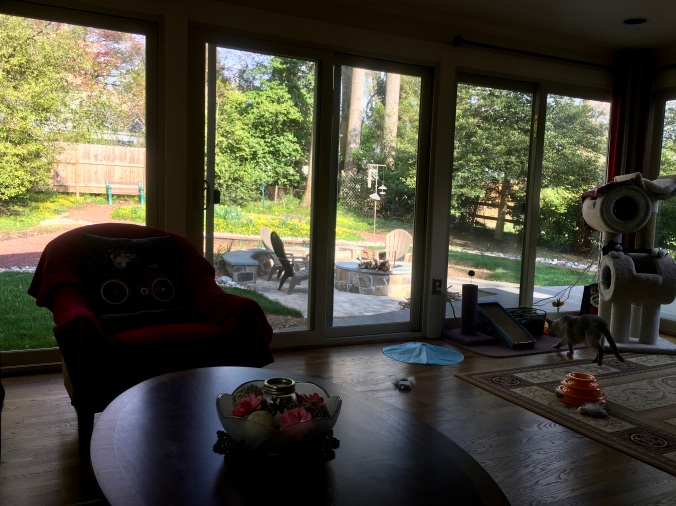 Campfire anyone?  Who’s afraid of a ferocious house cat?

Our house is a comfortable redoubt for a reason.  It was built for a man with ALS who loved the outdoors.  You wouldn’t know his name, but you do know his work.  He invented those bumpy tiles at crosswalks and along train platforms in his workshop in the basement of this house.

Thanks to Robert Kramer, this is a more than pleasant place if you have to hole up.

Oh! One more thing. The radio and TV are off.  Podcasts beat the hell out of newscasts. Old Time Radio podcasts are my favorites along with “Ben Franklin’s World,” “What you Missed in History Class” “Sawbones,” and “In Our Time” from the BBC.