Ash on the left.  Silver Maple on the right.

Kensington, Maryland, Winter, 2020 — The theme of these essays is hiking, backpacking, camping adventures, and a behind the scenes peek at the volunteers and activities that make it all possible.

What to write?  Planning is underway for the time when hikers might return to the trail. It’s dry, dull, iterative, and not very visual unless you relish Zoom call screen shots.  Moreover, it’s pointless to reveal what’s on order until we have a menu.  Why?  Because the truth is going to change six times between now and then.

Sometimes what happens in the wild forests also occurs in the so called urban forest.  Let’s talk about that and see what happens.

The backyard was landscaped in 1978.  The ash (in front) was planted then.  The silver maple (background) is a sucker that grew from an earlier silver maple, probably planted in the 1950s.

Virtues?  Ash trees are frequently planted as shade trees.  Their wood is prized for baseball bats.  Trail maintainers like them for their rot resistance when used for waterbars and other structures on the trail.

Silver maples are not valued as much.  They are fast-growing junk trees with brittle wood and shallow roots.  They will give you quick shade, but they are subject to snow, ice and wind damage.

Unfortunately, the ash is about to join the chestnut, elm, and hemlock on the endangered list.

The culprit is the emerald ash borer, an Asian import that is destroying ash trees throughout north America.  Our county has removed all ash trees on public property in hopes of slowing the borer’s progress.

The ash on the right was treated with systemic insecticide for the past two years.  It succumbed in September when its leaves all turned brown and curled up on the branches without falling.

There was some blonding higher up on the trunk which was another hint.

The choice was to wait for the ash to eventually fall down and risk crushing the deck, or launch a preemptive strike to speed up nature’s process.

A tree service did the work if for no other reason than they could haul the slash away and grind the stumps. 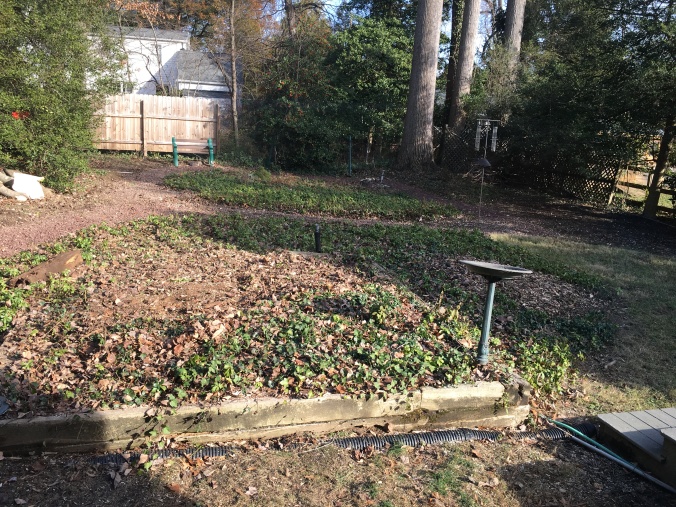 What to do with the space?  The 40+ year-old timbers are rotting.  The space is too ugly to leave be. 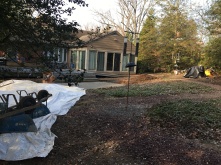 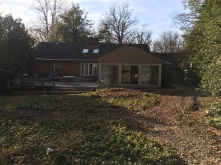 Here’s where the hiking and camping experience come in.  Everybody likes a campfire.  Me too.  Let the work begin.

I was stunned by the number of roots they had to dig out.  Glad I didn’t try to do this as a DYI project.  I will admit that I thought about it.

Taking shape.  Note the logs stacked in the background.  They are the best parts of the ash and maple.  In a year they will be seasoned firewood, ready for splitting. 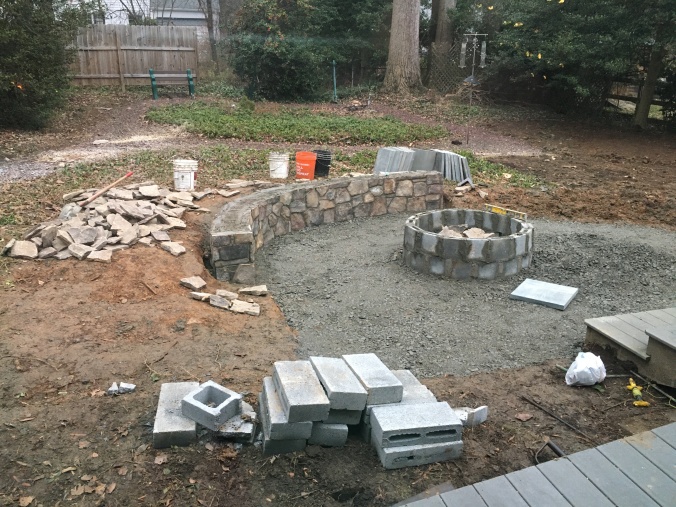 The stone veneer is not “lick and stick.” 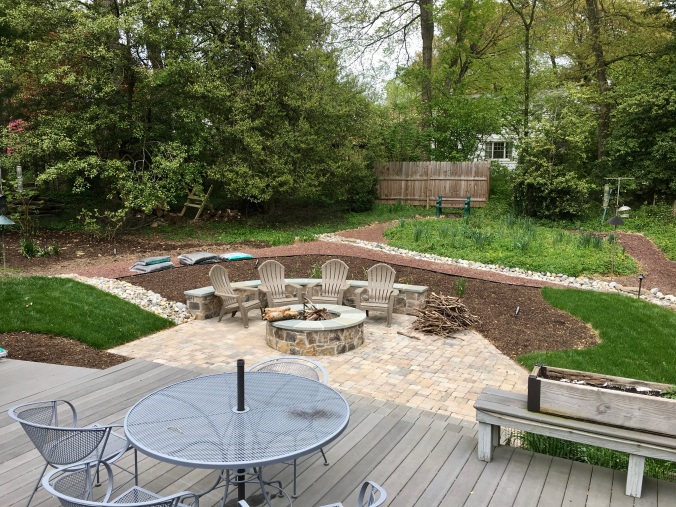 Finished product.  The dry creeks fix a long standing water runoff problem.  With all the trees around, there’s plenty of dead fall to be burned including larger limbs. 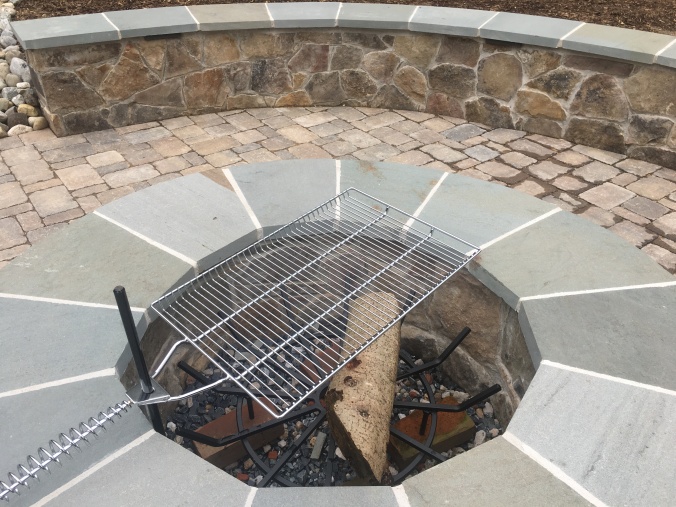 Can’t wait until people can come over.  Gang of Four, you’re first.

I’m staying in practice.  One of the dogwoods in front also died.  Yesterday I felled it and built a sawbuck that will be needed to buck the ash and maple next year. 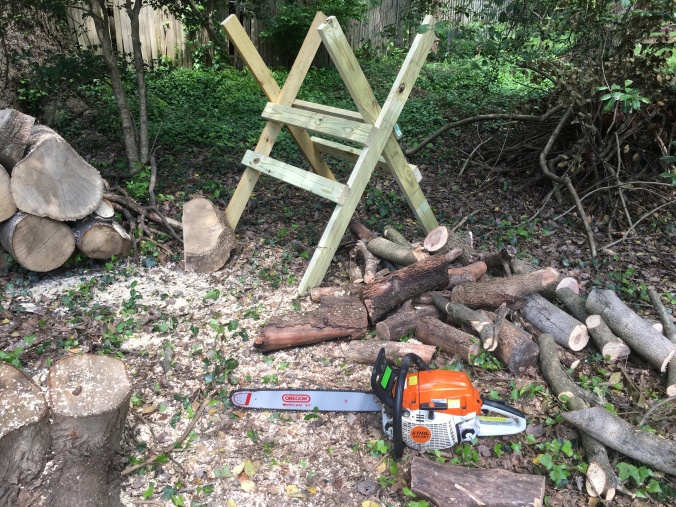 Since I had my PPE on, I could not resist the chance to convert some gasoline into noise.  Insider tip:  The big chips composing the saw dust indicate the chain is sharp.

Plants go in after the last frost date.  Can’t wait for the first fire.  The yard seems a lot larger too.

Have chainsaw.  Will travel.