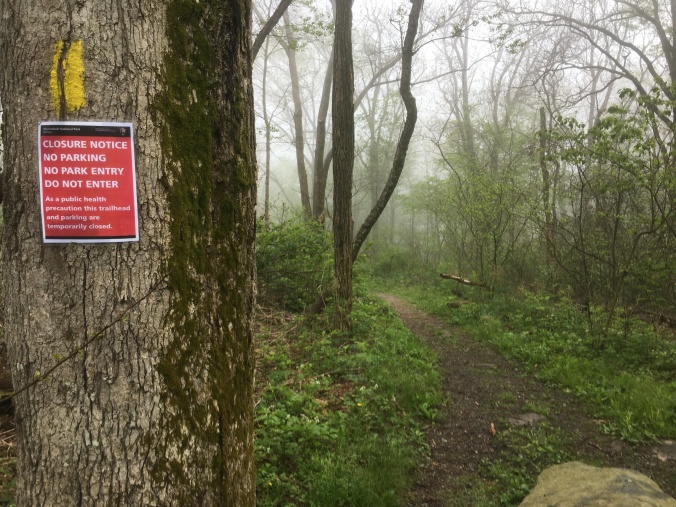 Shenandoah National Park, Virginia. May 27, 2020 — The park is open, sort of.  Skyline Drive, the 105-mile-long ribbon of a road that curls along the crest of the Blue Ridge, is open for traffic.

With the exception of a small number of public restrooms, all other facilities are closed including campgrounds.   The trails, except the most popular trails where social distance can’t be maintained, are welcoming footprints.  The huts/shelters remain off limits for use.

Imagine up to a dozen people sleeping in an AT shelter with one of them who arrives late in the evening, asymptomatic with corona virus, infecting those sleeping nearby.   The same logic applies to crowded communal picnic tables and for visitor centers.

The good news is this. After nearly three months, volunteers may now return.  For awhile I thought the most useless card in my wallet was my dormant Shenandoah volunteer pass. 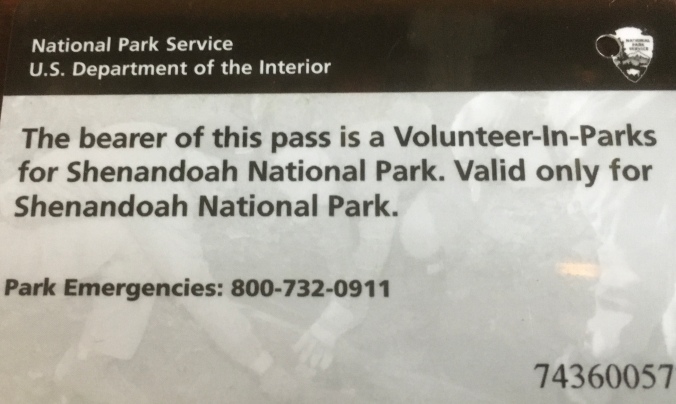 On Saturday the entry stations opened and we were turned on again.  Fearing a Black Friday-like run on the park, most of us opted to pass on the weekend.  I chose Wednesday to return because I was committed Monday and Tuesday, and heavy rains are forecast for Thursday, Friday and early Saturday, a day on which I am unavailable.

Saturday the Maryland ridgerunner and I will be pitching the caretaker tent and stringing the rain tarps at Annapolis Rock.  It is always a more sane exercise in better weather.  This annual ritual is two months late, delayed by the pandemic.

Back to the park. 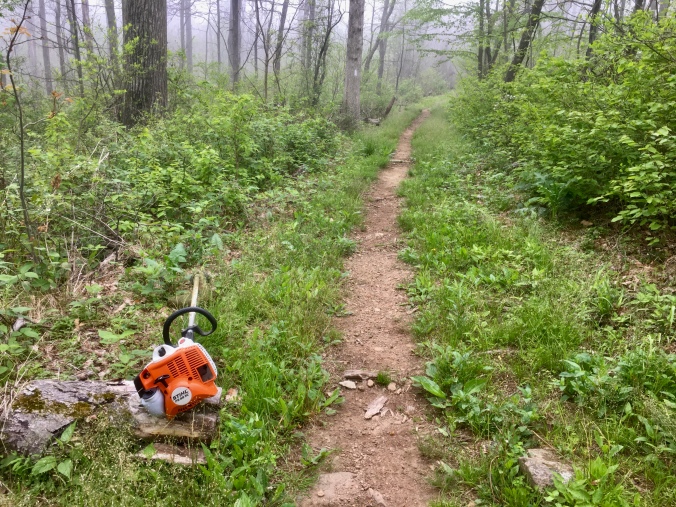 Ready to crank on a foggy day.  The aggressive weeding of previous years has retarded the growth of jewel weed which is the bane of string trimmers.  The width of the corridor is needed because certain briars can grow a foot per week and the width buys me time to return before the trail is impeded. 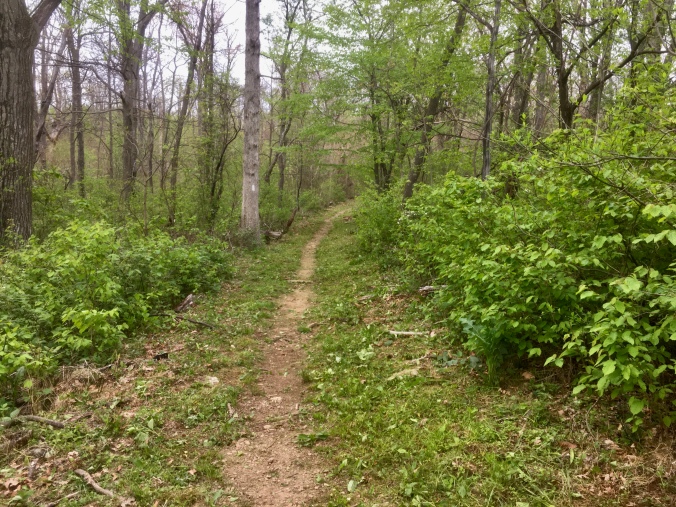 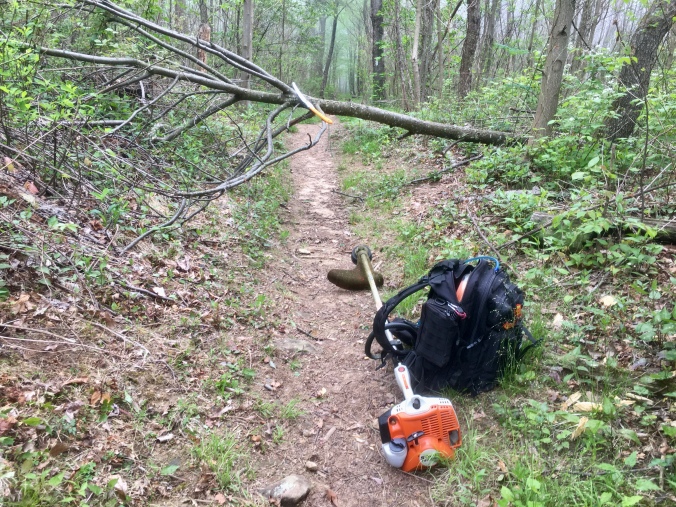 Just around the corner.  When you’re running a string trimmer, your head is usually down.  You’re wearing a helmet with face shield which further impedes vision.  Then you look up. 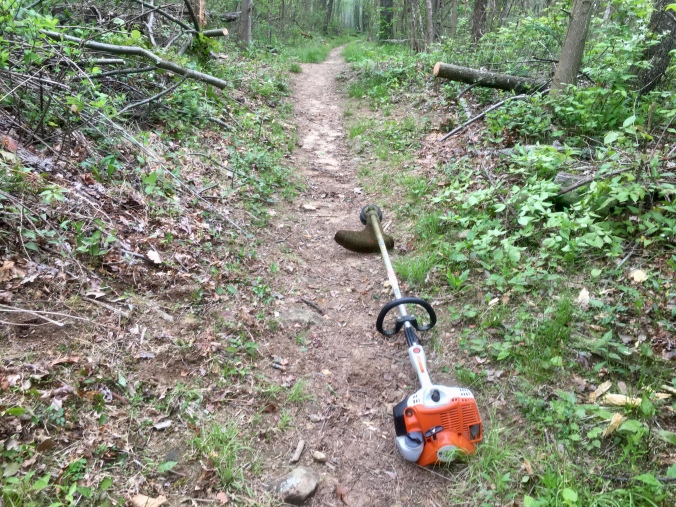 Black birch is easily dispatched with a folding saw. 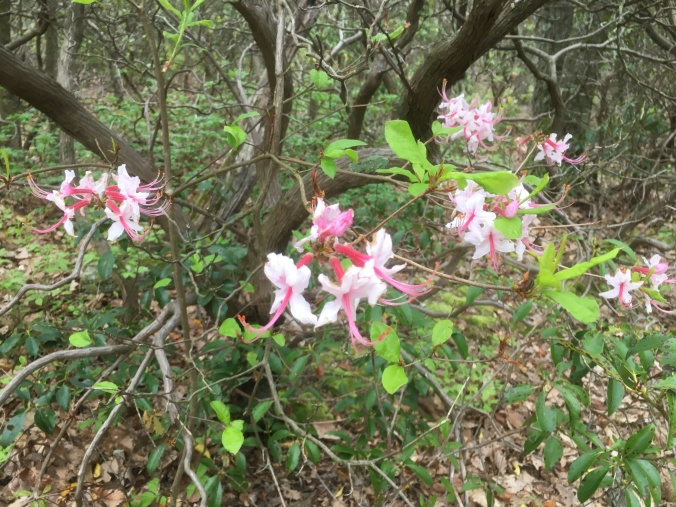 The aesthetics were amazing.  Wild azalea blooming.  The laurel will start soon. 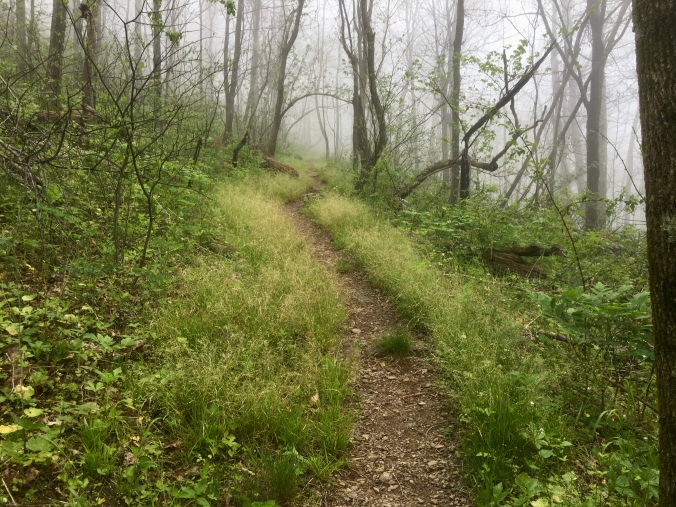 The tall grasses grow quickly.  People often ask why we remove the weeds and make such a racket in the process.  The answer is simple, Lyme Disease.

Animals use the hiking trails to get around just like people do.  The mammals such as deer, bear, coyotes, squirrels, and rabbits pick up ticks which drop when engorged.  Their babies instinctively crawl up on the vegetation to seek a host of their own. 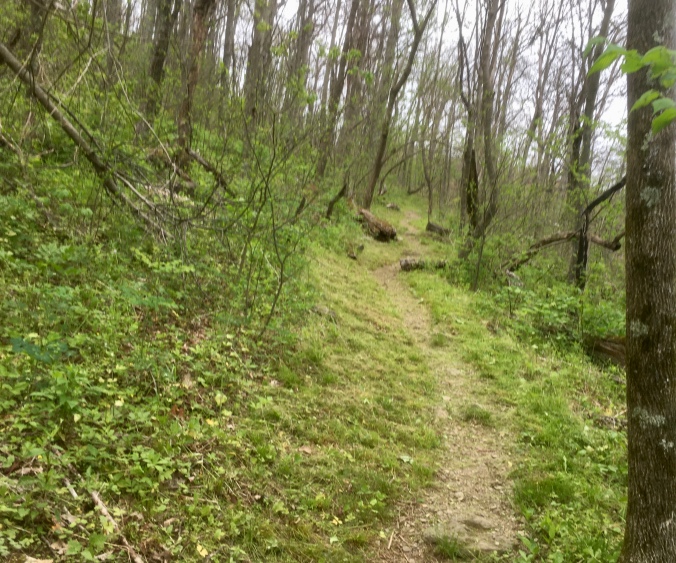 Remove the vector.  Reduce Lyme disease risk.  Mowing tall grass reminded me of harvesting wheat.  Weeding is arguably the least enjoyable, but probably the most important task trail maintainers do. 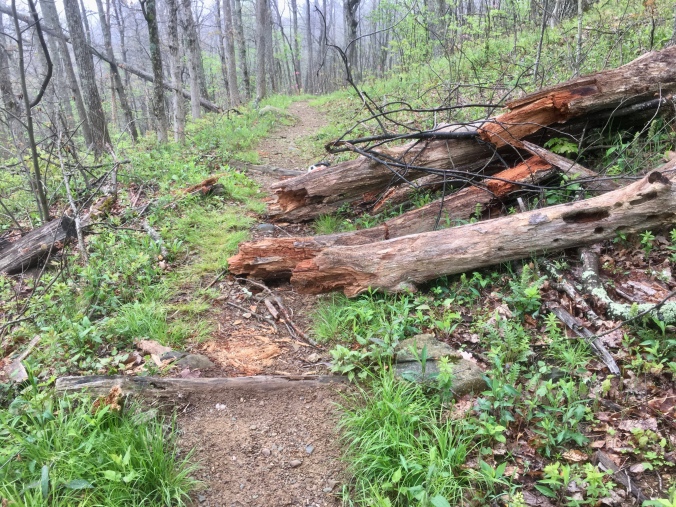 Just over the hill from the last photo. 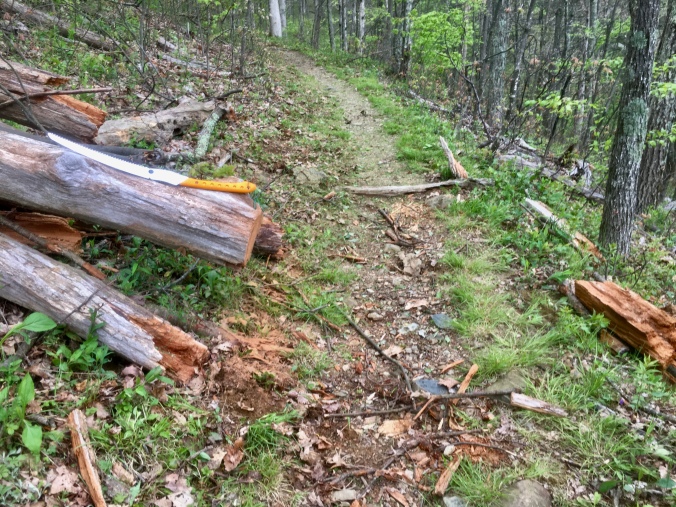 Trusty Silky Big Boy 2000 saw to the rescue.  I thought about coming back dragging a chainsaw for this one, but for one, it would be a long carry for two minutes work – literally a long climb for a short slide.

Secondly, we’re going to attack a large blowdown at the bottom of Little Devils Stairs Sunday using a crosscut saw that is special because it once belonged to my grandfather.  Not sure there would be enough time or energy left over when we’re done to climb half way up Compton Peak to make, honestly, thirty seconds worth of noise. 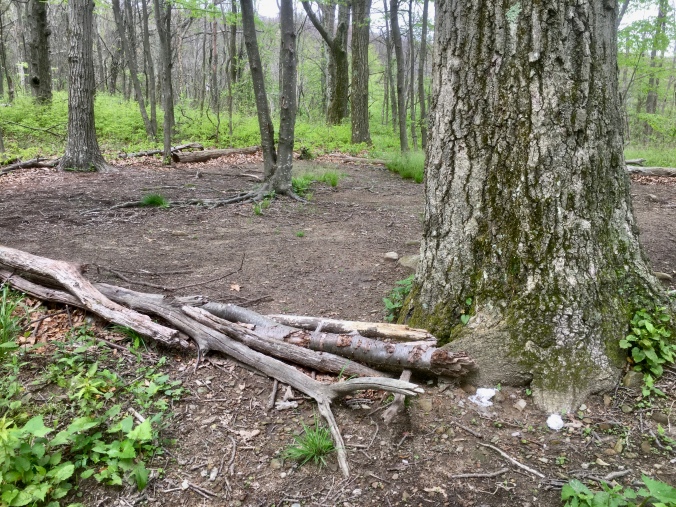 I always check the campsite above the spring on Compton.  It’s now official.  The park trail crews have been defining its perimeter with logs to help contain the site and limit spreading.

People are inherently predictable.  Anyone who has been a ridgerunner can tell you where you’re going to find the TP.

Speaking of ridgerunners, they were defunded in the park this year because thru hiking was discouraged and park gate receipts were dramatically down.  Tuesday and Wednesday a fellow maintainer and I counted 14 thru hikers.  The noobs are making a mess.  Help! 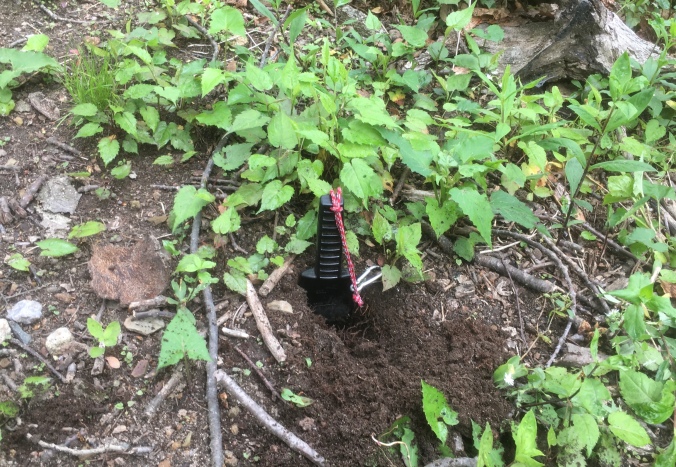 There’s a reason I always carry potty trowel.  All told I buried two deposits this trip.  As previously reported, there are more noobs in the woods now and it shows. 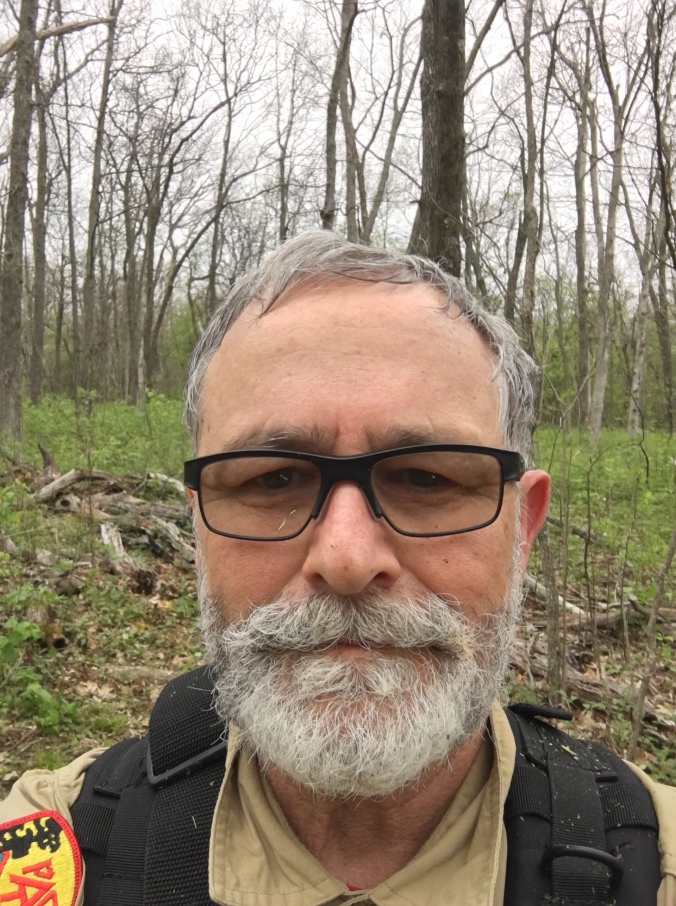 Long day.  Sweaty and tired.  The COVID beard is coming along.  String trimmers turn the weeds, which include poison ivy, into pesto.  I’m coated with it.  Time to get a shower. 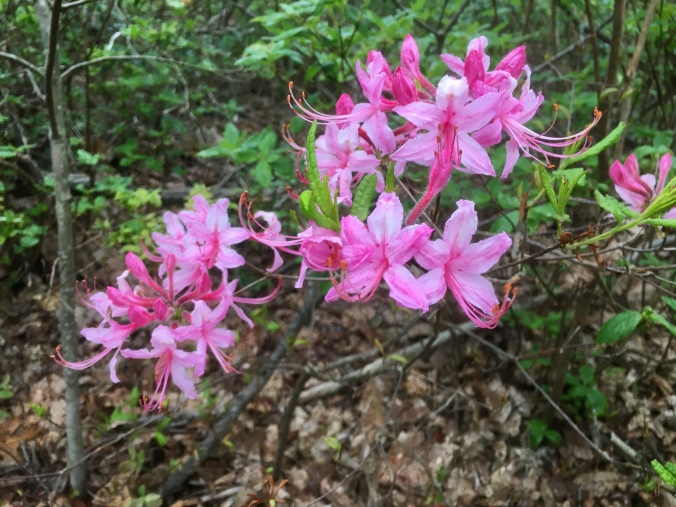 Spring in the park is awesome!  Did I say I love this job?

One thought on “Shenandoah. At last!”