The Appalachian Trail, March and April to date, 2021 —  We’re back in the saddle.  It’s been nearly 20 months since the eponymous sound of my Jet Boil stove signaled that morning coffee was close at hand.  From now until when, subject to the inconvenience of pandemic protocols, we’re in the backcountry in full force patrolling, building, digging, and sawing.  The ridgerunners, the North District Hoodlums and the trail maintainers are riding again.

Now it’s been a minute since the last blog post.  There’s a lot of catching up to do.  The excuse is simple, WordPress decided to reject the original file format in which the newest Apple phones store their images.  It’s taken awhile to figure out a relatively convenient way to make it work.  Meanwhile the other social media automatically convert the files and everyone is none the wiser.  If Word Press can’t figure this out and become a little more customer friendly, I’m moving to a new platform.

April 1, aka April Fools Day, kicks off the year.  Job one is establishing the caretaker site at Annapolis Rock, a beautacious overlook and campground just off the AT.  First we pitch the tent, graciously donated by REI.  Then we string the tarps.  They help protect the tent from UV and the picnic table from sun and rain. 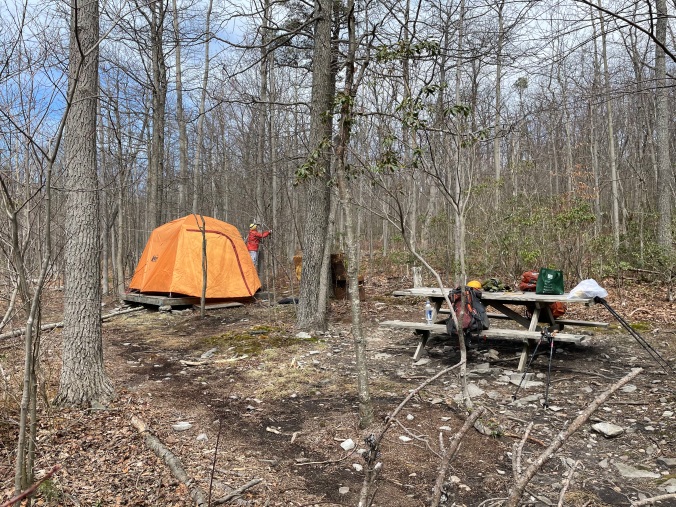 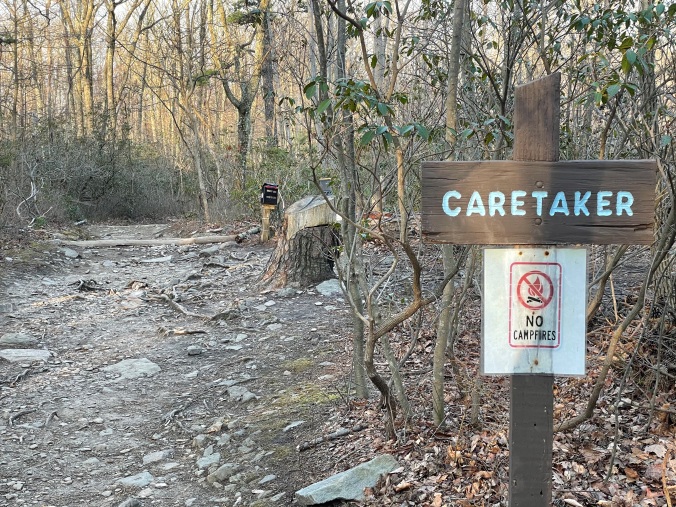 Once the caretaker site is established, we walk the area for orientation and OJT.  In the beginning of the season, there’s always noncompliance issues to fix including dismantling fire rings, picking up a load of trash and cleaning the privies.

This humongous fire ring is the largest I’ve ever seen.  It’s at group site 1.  The sign on the tree says “No  fires.” No irony intended.

Gone.   Ash has been shoveled and scattered in the woods.

I’ve been volunteering to do this job since 2015.  That experience has taught me to hope for the best and prepare for the worst.  This act vandalism was truly upsetting.  This was a beautiful grassy picnic spot just south of the main overlook.  Some people built a large fire and smashed their alcohol bottles on the rocks carpeting the space with small shards of broken glass.  It was a perfect area denial attack.  The amount and size of the shards are impossible to clean up.  It is no longer a place to spread your picnic blanket.  Of course the sign says no fires and no camping. 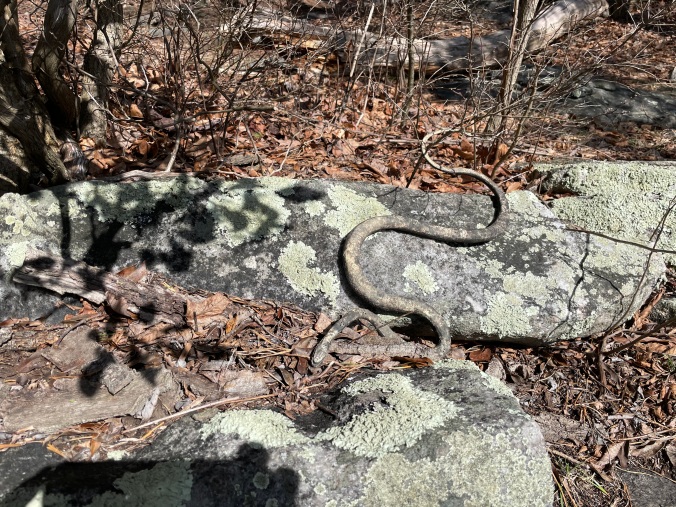 Here’s what really frosted my sense of humor.  The process of destruction cooked this environmentally valuable nonvenomous snake. I hope there is a special place in hell for people like the ones who did this. 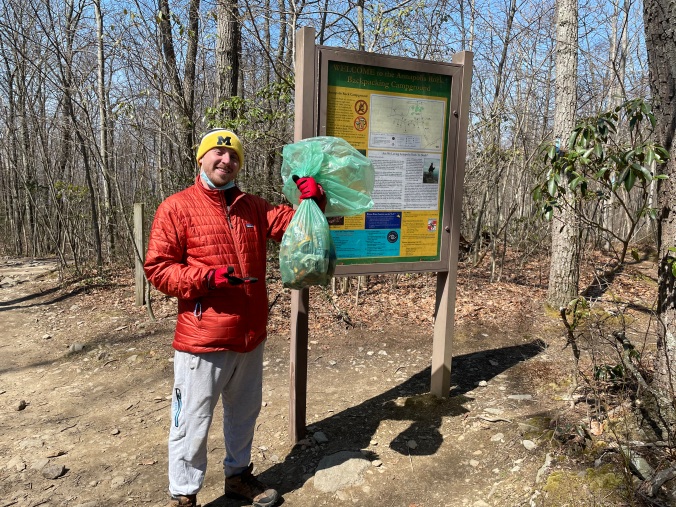 The amount of trash was not bad for this time of year.  Fortunately the maintainer had been there within the previous month.

The next step in OJT is patrolling.  This hike covered the nine miles from Washington Monument State Park to Gathland State Park.  Of course there’s the ubiquitous trash haul.

Ridgerunner duties include sweeping out the shelters and tending the composting privies.  This time Branden is dispersing the “cone of deposition” which had risen nearly to seat level.  Glamorous job it ain’t.  Critical job it is.

Ridgerunners perform light trail maintenance.  In practice that means clipping vegetation which generally means chopping back thorny briars and berry vines. They also have a 12-inch folding saw which allows them to clear obstructions too small for chainsaws. 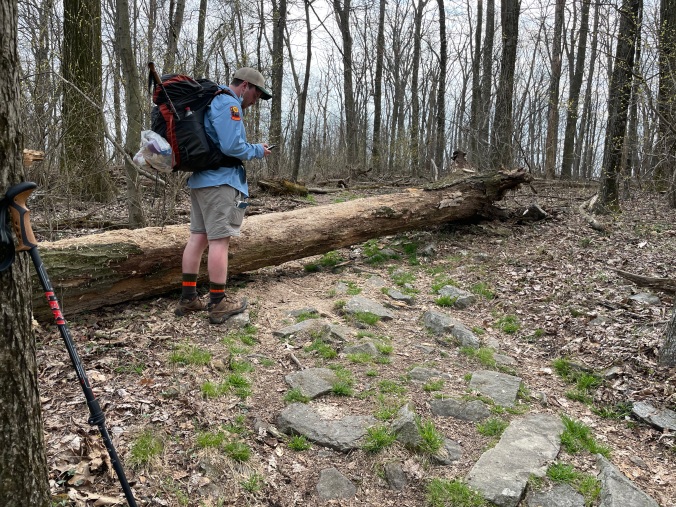 Large  blowdowns are photographed and geolocated in the FastField app.

In this case we cleared a path for hikers by removing small branches.  In concept we are trying to prevent errosive social trails from forming before a saw crew can address the big stuff.

We spent the night at the Crampton Gap Shelter.  Branden had not set up his new tent before.  It was not intuitive.  Let’s just say it took awhile.

Let’s call it dinner on a rock.  The best practice is to transfer freeze dry meals from their heavy and bulky packaging to freezer bags.  Freezer bags don’t melt or transfer a plastic taste to food.  The name of the meal is written on the outside along with the amount of water needed to rehydrate. No dishes to clean, zero risk of food poisoning, and very little trash to pack out. 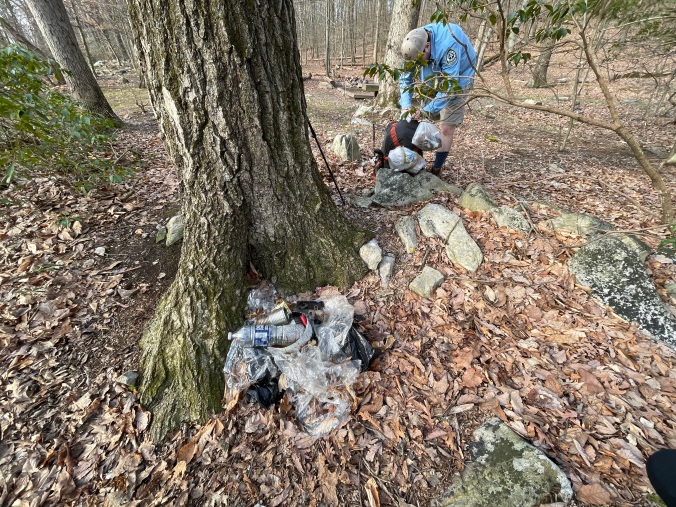 Humans tend to have common instincts and ridgerunners develop a sense where people hide trash.   They type of trash suggests an overnighter or a short stay by a homeless person.

Patrol complete.  That’s nine miles worth of trash.  The red object is a sleeping bag intended for a sleep over or possible summer car camping.  Clearly its owner didn’t think it was valuable enough to hike out.

The Shenandoah ridgerunner starts tomorrow.  Stay tuned for the next adventure.

5 thoughts on “Have Backpack. Will Travel.”