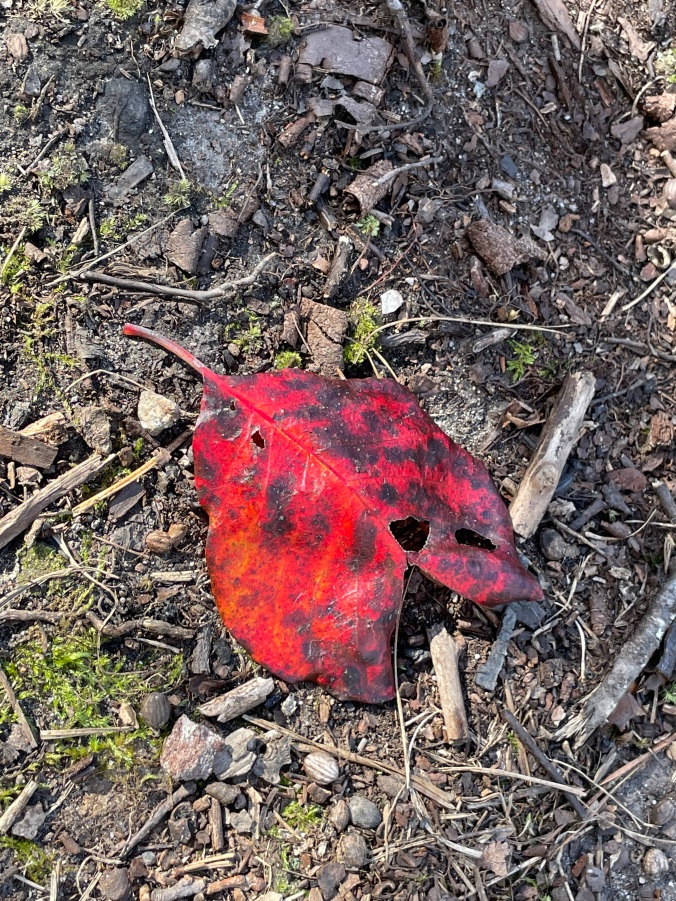 Shennandoah National Park and Annapolis Rock Maryland, October 22 – 23, 2021 —  It’s that time again. In the park the end of the trail crew season is in sight.  We have one more trip next month.  In Maryland time expires for the last ridgerunner standing.

In the mean time, the AT section on the south side of Compton Peak, for which I have been responsible and now shared by Caroline, needs a lot of work before the ground freezes.  A recent high intensity storm literally wiped out some of the erosion control structures. 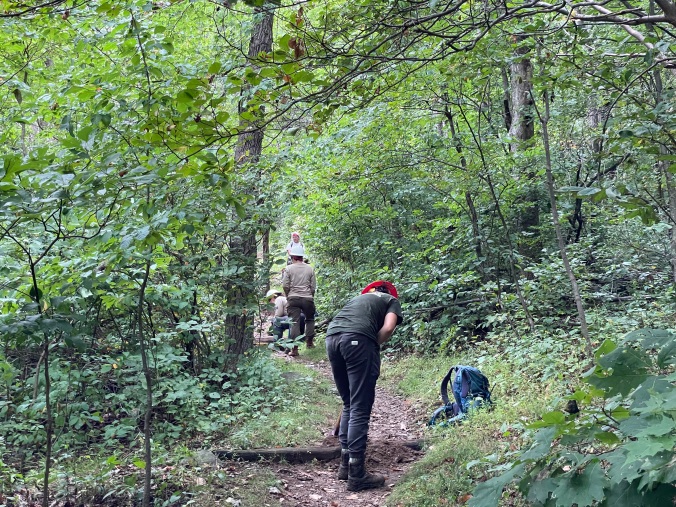 A Virginia Conservation Corps crew rebuilt the upper two thirds, but the lower third, which is sandy like Saudi Arabia, was completely silted up.  If we don’t get it done before the ground freezes, mother nature herself will rebuild it over the winter.  We may not appreciate her work come spring.

Meanwhile, the Hoodlums divided into two parties.  One was dispatched to Jeremy’s Run, a serpentine blowdown factory featuring a number of wet-feet stream crossings.

Jeremy’s Run is located in a federally designated wilderness area meaning only traditional tools may be used.  Photo by Ruth Stornetta via Facebook.

The other group continued to work on the rebuild of the AT on the north side of Compton Peak.  I’m told we have surpassed 700 hours of volunteer labor on this project so far this year.  Lord willing and the creek don’t rise, we’ll git ‘er finished in November.

The Hoodlums at Compton split their labor.  One group continued to repair and replace waterbars and check dams at the bottom of the mountain.  This trail is one of the most popular in the park featuring a nice viewpoint and a unique columnar basalt formation at the summit.  It’s also the first time hikers can be on the AT from the north (Front Royal) entry station. 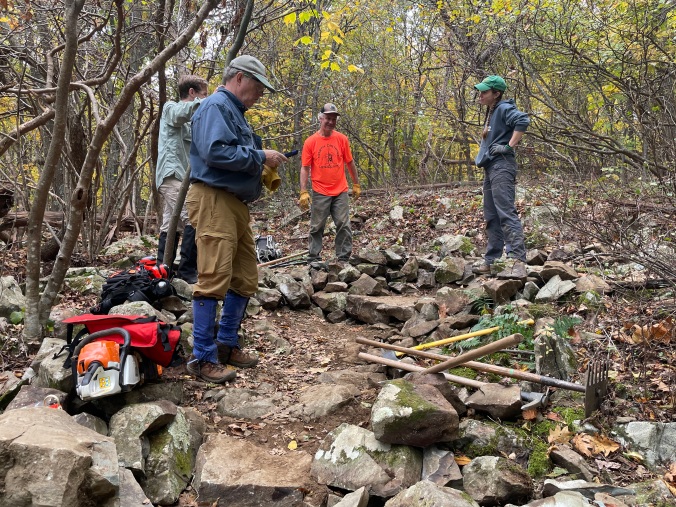 The work party I joined was assigned to finish the stone staircase near the top of the mountain, so that’s the bulk of the story we’re telling today.

The first thing you do is find a large rock, one that will stay put and heavy enough to resist bears checking for lunch underneath.

Step two is to dig a hole to put it in.  We use pick handles to measure the size of both rock and hole.

Then you have to get the rock to where you want it to be.  The rocks are hard to move because they are too big for people to pick them up, the terrain is lumpy with other rocks, and they are awkward. 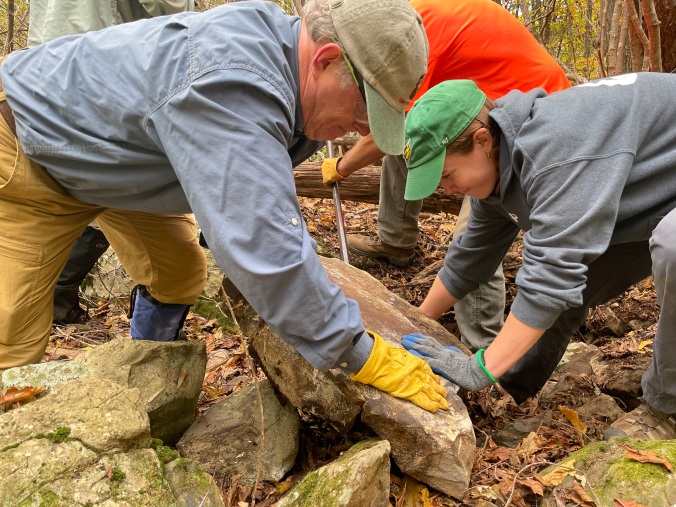 Watch the fingers and toes!

Then you have to set it and test for wobble.  We broke off the piece that stuck out.

In the interim, the hikers keep coming.  It was a picture perfect day and the park was jammed.

The number of hikers passing through can hinder progress.  We give them priority except when we’re doing something that could be a safety problem for them. 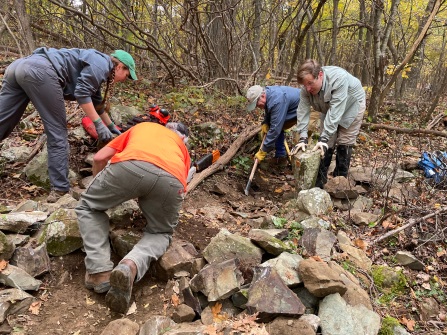 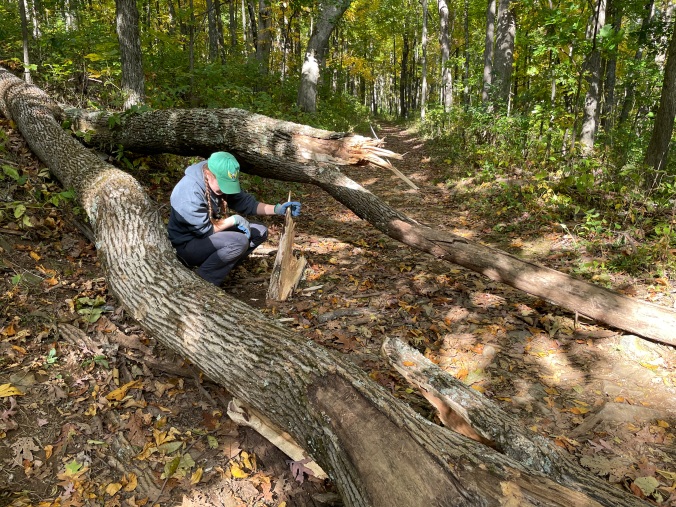 We finished early enough that Caroline and I could clear three blowdowns on the AT between Compton parking and the north park boundary.   This was the most magnificent of them all.

This large ash likely fell during a wind storm Thursday before last.  There are many reasons you don’t want to near one of these trees when they come down.  This is not the first time a branch has been driven so deeply into the trail tread that we couldn’t get it out.  Had to cut it off. 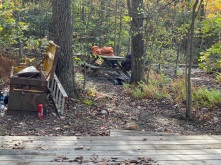 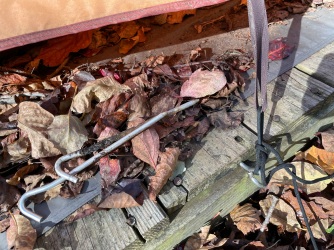 A day earlier I helped the ridgerunner decommission the Annapolis Rock caretaker site for the winter. Thanks to REI for donating the tent.

When leaves begin to fall so does the caretaker tent at Annapolis Rock. The autumn continues, but the ridgerunner season ends. It’s the saddest day of the year for me.

To date we’ve had more than 30 ridgerunners since I became responsible for the program.  They are special people who join a long line of others who have selflessly helped protect and preserve the AT which, in and of itself, is a national treasure. But there’s a lot more.  In our area alone, it runs through three national parks, one state forest, five state parks and a couple of wildlife conservation areas.

2 thoughts on “The End is Near”