Appalachian Trail, Shenandoah National Park (SNP), Compton Peak to Jenkins Gap, Saturday February 7, 2015 —  Each inch of the Appalachian Trail has a human who is responsible for its upkeep.  These folks are called overseers.  Stewards would be more like it.

Overseers remove blown down trees, branches, clean and repair erosion control structures like check dams and waterbars, build new ones as needed, cut back vegetation that may harbor ticks and pick up trash when necessary.

As luck would have it, yours truly is about to become responsible for one mile of the Appalachian Trail from Jenkins Gap to the top of Compton Peak (SNP north district).  That’s AT northbound miles 957.4 to 958.7.  I’m about to become a proud papa.

This is a handsome section of trail if I do say so myself.  From the Jenkins Gap parking lot, it’s optically flat for about a half mile.  This part has been burned over in the past. I’m going to have to learn more about the fire.  Consequently it is infested with lots of vines and thorns. These will require a lot of attention.

The second half begins with a nice flight of stone steps leading to a sluice a bunch of us built two years ago.  The Sluice keeps water from a healthy spring from washing out the trail.  The grade to the top is gentle by any standard.  The treadway throughout has a minimal number of rocks.  Yea!  This isn’t Pennsylvania, you know.

The trail section ends on top of Compton peak.

A blue blaze trail crosses the AT on Compton Peak leading west to a nice overlook and east to a columnar basalt formation which is one of the few on the east coast.  Eighteen months ago we built 68 stone steps to help make the trail to the basalt formation more passable and to help control erosion.  Judging from the tracks in the snow, it’s popular year round. 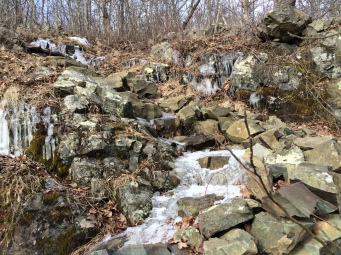 The primary reason for building the steps to the basalt formation was a spring that washed out the trail.  Looks like we’ve got more to learn about water management.

The day was pleasant.  The temps hovered around 32F with zero wind.  The sun was mostly cloaked by heavy lead-colored clouds.

Without overseers, trails would quickly become impassible no matter whether they are in a state or local parks or one of the big ones in the national trail system. 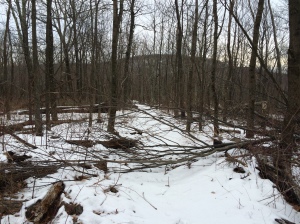 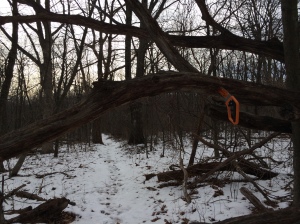 In total there were a even dozen obstructions that had to be removed.

Jenkins Gap.  End of the line.