Lauralee “Blissful” Bliss, our ridgerunner stationed herself between the fire and the ever increasing northbound flow of Appalachian Trail thru hikers.  They are entering the park now at a rate of 10 – 15 per day.  As time passes, that trickle will evolve into a torrent by late June.

Since Wednesday and Thursdays are Blissful’s days off, I drove three hours to the park’s southern entrance at Rockfish Gap, just outside Waynesboro, VA.  There intercepted hikers could be briefed on the situation and their options for bypassing the fire.

Hal Evans, another veteran ridgerunner, not yet on duty, volunteered to station himself at the north end of the fire to inform southbound hikers. 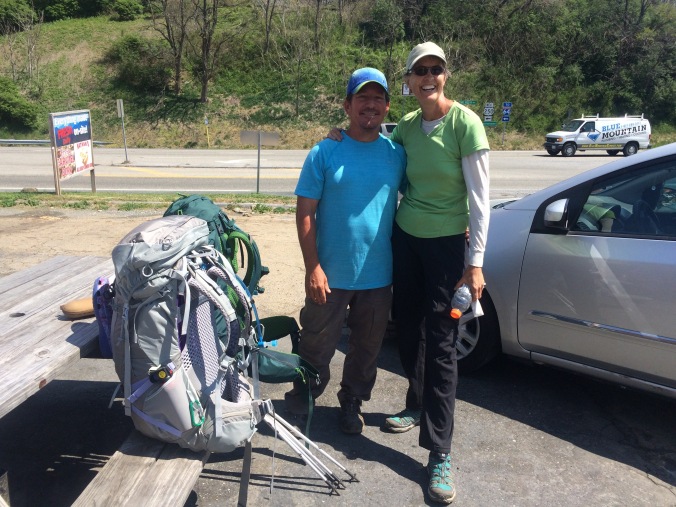 Popeye and Olive Oyl are thru hikers from Florida.  Here waiting for their shuttle to town.

Waynesboro is a standard resupply stop and zero (no miles hiked) town.  It’s five days from the last resupply point and the home of Ming’s, a famous (on the trail) all you can eat restaurant.

Waysnesboro features a city park with a pavilion built by ALDHA, the Appalachian Long Distance Hikers Association.  The pavilion features solar power for recharging electronics.  Hikers can both tent and hang their hammocks in the park.

I camped at the Pavilion which is located near an closed factory complex.  Waynesboro is another one of the many towns along the trail that have suffered economically from globalization and digital disruption.

The fire, known as the Rocky Mnt. Fire, started Saturday and the National Park Service estimates it won’t be under control until April 30. After that it will take about 10 days for hot spots to cool.  Then trail crews will have to clear the trees that have fallen across the hiking trails to make them passable.

To date the conflagration has closed 18 miles of the Appalachian Trail.  Hikers are being shuttled in the park by the park service around the closed area.  For those who don’t want to hike near the fire area, a cadre of trail angels is offering free shuttles to the Swift Run Gap entrance which is north of and far away from the burning.

Officials assume the fire was human caused, but an investigation will determine the true cause.

You can follow the fire’s progress at this link: InciWeb

Fire is actually a healthy part of the forest ecosystem.  Most animals can avoid the flames and the land quickly rejuvenates into healthy forest land again.